As we previously reported, there was a challenge on the official Doctor Who website to find all the clues which would lead to a password which would unlock content which, until now, had been a mystery.

The most recent clue was published in Doctor Who Magazine in the form of a QR code.

There’s a #FindTheDoctor QR code in Doctor Who Magazine 569 which leads to a 404 on the https://t.co/9TGXT0GeNh website! I can only assume that it’s meant to go live sometime between now and Thursday when the magazine officially hits newsstands. DWM is on Kindle now! pic.twitter.com/vvPBdUGJYI

The QR code led to a page on the official website: https://www.doctorwho.tv/message

The message was not published on the website until 16 September at 13:13 BST but it included these words.

“HaVe you found the latest clue?”

If this video sounds a bit strange, it’s because the audio message in it is played backwards.

The letters collected so far in all the clues were DC5EGYVANV. It didn’t take long after that for someone to guess the final three letters in the password. The successful password discovered was DC5EGYVANVETE, which unlocked the content in the password field on this website: https://www.doctorwho.tv/mystery

The contents revealed were this photo. 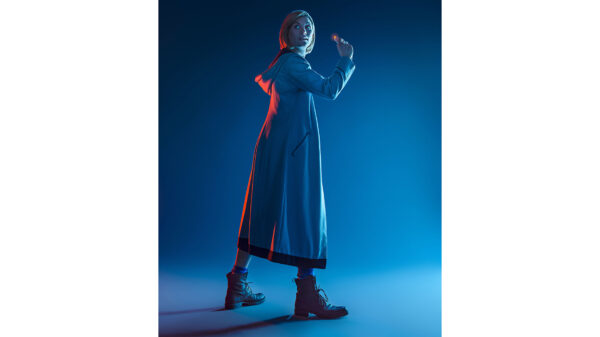 And this video, which provides a brief glimpse of a new Doctor Who monster.

A fan pieced together screen shots from the video for an approximation of what the head of the monster would look like whole.

We look forward to seeing this scary monster in action in Doctor Who Series 13.

Doctor Who Series 13 will consist of six episodes of a single story. The series is scheduled to air in autumn of 2021.

There will be three additional specials in 2022, airing on New Year’s Day, spring, and a BBC Centenary special in Autumn which will be the last for Jodie Whittaker’s thirteenth Doctor.