The Eternals star is starring in the adaptation of The Moon Represents My Heart, a forthcoming novel.

Gemma Chan’s big screen career has taken off in the past few years with a couple of Marvel roles, plus a great turn in Crazy Rich Asians. However, the star also enjoys a thriving television career; she was one of the leads in Humans and has guested in Doctor Who, Sherlock and Death in Paradise. 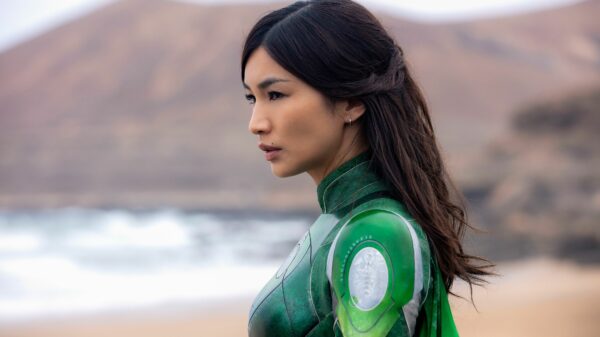 Now, thanks to The Hollywood Reporter, we know she’s bound for Netflix.

Chan is executive producing and starring in a “limited series” based on The Moon Represents My Heart. Adapted from Pim Wangtechawat’s forthcoming debut novel, out in 2023, it follows a British-Chinese family with the secret ability to time travel.

Here’s the premise for The Moon Represents My Heart:

The Wang family are hiding a secret – they all have the ability to time travel. When parents Joshua and Lily depart for the past and never return, their children Tommy and Eva are forced to deal with their grief alone. Eva might be trying to find her place in the present, but Tommy is pulled further and further into a past that he hopes holds the truth. When he falls in love with a woman from a different era, his inability to confront his own history has severe ramifications for the people who can truly bring him happiness.

The book’s publisher Oneworld describes the novel as “Heartfelt and hopeful, weaving through decades and across continents.”

Thank you so much to those who’ve made this possible: @gemma_chan (you really are the best!), Tara Timinsky (THEE badass!), my wonderful agent @lizadeblock, the team at @21LapsEnt (Emily, Moera & Shawn), @netflix and so many others who’ve believed in this story from day one! 🙏🏼

The show comes from by Shawn Levy’s 21 Laps Entertainment, best known for the all-conquering Stranger Things. It will form part of 21 Laps’ overall deal with Netflix.

Obviously, The Moon Represents My Heart is a long way off but we’ll keep you posted.