BBC Worldwide has revealed details of the upcoming complete box set for the latest season of Doctor Who .

The complete ninth season will be released on Monday 7 March next year on DVD and Blu-ray.

> Pre-order the box set on DVD on Amazon.

> Pre-order the box set on Blu-ray on Amazon.

The set will contain all 12 episodes from Peter Capaldi’s second season as the Doctor, plus 2014’s Christmas special ‘Last Christmas’ and this year’s festive episode ‘The Husbands of River Song’, with more than four hours’ worth of bonus features. 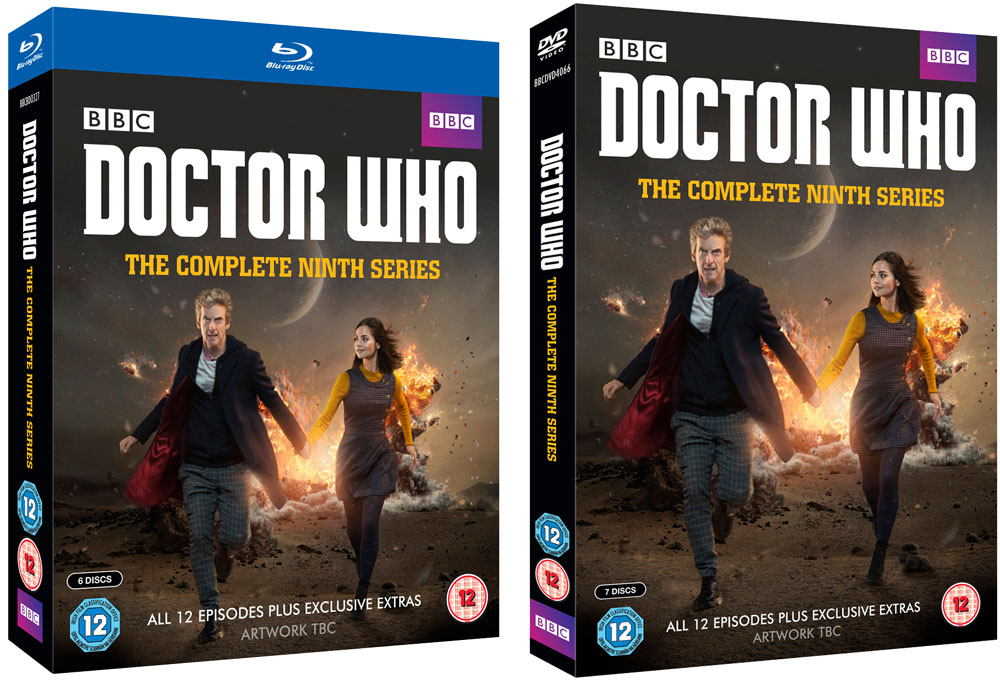 All the Season 9 trailers

Doctor Who Extra: The Magician’s Apprentice & The Witch’s Familiar

Peter Capaldi reveals all, and shows off his guitar riffs, as we get the inside story on this stunning two-parter. Featuring additional interviews with Michelle Gomez and Steven Moffat.

Doctor Who Extra: Under the Lake & Before the Flood

Go backstage and meet some very ghastly monsters! Discover the secret of a special celebrity appearance as Paul Kaye welcomes us on location, and we reveal how to make a big splash on set. Featuring interviews with Peter Capaldi, Jenna Coleman, writer Toby Whithouse and production designer Michael Pickwoad.

Doctor Who Extra: The Girl Who Died & The Woman Who Lived

Maisie Williams talks about crossing fandoms, celebrates her birthday with an impromptu quiz, and generally everyone has a lot of fun, as Rufus Hound gives us a unique view of what it’s like to make Doctor Who. Featuring interviews with Peter Capaldi and Maisie Williams.

The Zygons are back! We discover how a Zygon keeps fit, and Ingrid Oliver tells of her delight at once more playing the Doctor’s biggest fan, Osgood! Featuring interviews with Peter Capaldi, Jenna Coleman and Ingrid Oliver.

Doctor Who Extra: Sleep No More

Mark Gatiss reveals the story behind the horror, Reece Shearsmith reviews the importance of space glasses, and we look at the challenges of making this unique episode. Featuring interviews with Peter Capaldi, Jenna Coleman and Steven Moffat.

Doctor Who Extra: Face the Raven

Joivan Wade (Rigsy) is shocked to be back, but he’s not the only character to return for this unforgettable adventure, as we discover the perils of thinking you are invincible. Featuring interviews with Peter Capaldi, Jenna Coleman and Steven Moffat.

Doctor Who Extra: The Husbands of River Song

Matt Lucas is our guide as we join River Song, the Doctor and a star-liner full of supervillains for this festive Christmas special. We get the heads-up on the Hydroflax from Greg Davies, reveal Alex Kingston’s favourite Sonic, and we find out what Peter Capaldi is getting for Christmas. Featuring interviews with Peter Capaldi, Alex Kingston, and Steven Moffat.

The definitive guide for a would-be Doctor Who scriptwriter. We follow Sarah Dollard on her intricate journey to create her episode, Trap Street. From the highs of pitching her original idea to Steven Moffat, to the challenges of writing her first draft – faced with a blank page and typing Int. TARDIS Day – to seeing her episode becoming reality.

Peter Capaldi and Steven Moffat reveal the inspiration for the return of the Daleks to the incredible season opener of series 9, how their earliest memories have shaped their devotion to the ultimate killing machine, and the journey to the Dalek homeland of Skaro.

The Adventures of River Song documentary

Join Alex Kingston and Steven Moffat as we look forward to River’s return in ‘The Husbands of River Song’. Find out how River’s character came to be created, why Alex just had to play the role, what happened when the cast discovered who River really is. Narrated by Nina Toussaint-White.

A video selection box of the funniest, most insightful and engaging online treats from behind the scenes of Series 9. With interviews and magical moments from Peter Capaldi, Jenna Coleman and Steven Moffat, and featuring a host of guest stars, including Maisie Williams, Michelle Gomez, Rufus Hound, Ingrid Oliver and Slipknot.

In 2012, Jenna Coleman joined Doctor Who and took her place in television history as the Doctor’s newest companion, Clara Oswald. Having become the longest serving companion since the revival of the show, Clara’s time on the TARDIS has now come to an end, so we can now look back at just what made the Impossible Girl, well, possible. Featuring interviews with Peter Capaldi, Matt Smith and Jenna Coleman. Narrated by Colin McFarlane.

Christel Dee gives a whistle-stop guide to Doctor Who: The Fan Show the online series that celebrates Doctor Who and the amazing creativity of the show’s fans. We get a peek inside Steven Moffat’s writing lair, take a look into the Old Monster’s Retirement Home and step into the amazing world of Minecraft to find out how fans are celebrating their love for the show online. We even get face to face with the Doctor and Missy to ask them all the questions the fans want to know.

> Pre-order the box set on DVD on Amazon.

> Pre-order the box set on Blu-ray on Amazon.

What did you think of Season 9? Let us know below…