The kids from Stranger Things have been getting into the festive spirit, wrapping presents for their fans in a cutesy viral video. You can watch it right here.

Finn Wolfhard, Millie Bobby Brown, Gaten Matarazzo, Caleb McLaughlin, Noah Schnapp and Sadie Sink all appear in the video, which is here for your viewing pleasure…

As for Stranger Things season 3 itself, we don’t even know its release date yet (beyond a vague expectation that it will arrive at some point in 2019). We have heard a few interesting soundbites from the cast, though.

David Harbour has been chatting to Deadline, for instance, promising fans that Jim Hopper will evolve, creative risks will be taken, and movies from 1985 will be referenced.

“We’re experimenting a lot this season, and we’re taking risks, and I hope that they pay off but they are risks. We’re going into territories we’ve never been to before, and it’s exciting.”

As for what movies will be referenced, Harbour had this to say:

“If you’re a real fan of Stranger Things and you really want to know, I would go look at the great films that were released in ’85, of which there were many, and just go down that list and think of the possibilities that we could be going with. I think it is a specific season to 1985, and so you’ll see references to that.”

A quick Google search reminds us that Back To The Future, The Goonies, The Breakfast Club, Rambo: First Blood Part II, Rocky IV, Weird Science and Mad Max: Beyond Thunderdome were some of the biggest films in 1985. There is certainly a lot of fun to be had there, in terms of what Stranger Things 3 could homage. 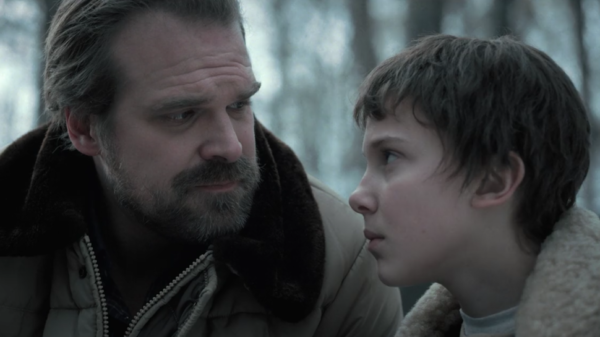 Harbour also explained that Stranger Things season 3 will combine what we loved about Hopper in the show’s previous two runs:

“We had a little softer season with Jim in Season 2, where he was really working off these fatherly instincts and understanding a responsibility that was larger than himself, and I think one of the things that we missed from Season 1 was this guy who goes into government facilities and punches people in the face. He’s not a doofus, but he’s a bit of a Columbo character.

“There was a sort of swashbuckling guy that we put on the back burner, so I think we’ll see a little more of the swashbuckling Hopper you may have liked from Season 1. It’s almost like [Season] 1 plus two, equals three. It’s like you have this third character now, who goes back to the swashbuckling guy of Season 1, but also has behind him this adopted daughter who he loves very much, so it’s really cool.”

A swashbuckling hero with a heart, and plenty of scenes between Hopper and Millie Bobby Brown’s Eleven? You can count us very much on board with all of that.

We’ll be sure to keep you in the loop as more Stranger Things season 3 news comes to light.