The second volume of Big Finish’s latest audio adventures from the universe of Blake’s 7 focusing on the rebel leader Avalon offers a new trilogy of stories set in deep space. The first volume of Avalon stories had been Earth-bound. But this latest boxset expands that vista, opening up a wider sense of Avalon’s role as a catalyst in the revolt against the Federation simmering across the galaxy. Completing the job of embedding Avalon’s story in the series’ canon very effectively, this second set of stories offers enticing encounters between Avalon and some signature characters from the original TV series.

Opening episode “Bayban’s Bounty” is in the style of a classic Blake’s 7 mission, as Avalon recruits a far-from-reliable consultant to join a raid on an all-but-impenetrable vault. Avalon hopes to retrieve an important religious artefact (and something else of personal interest to this new temporary member of her team). Avalon’s motivation is not theological. She’s hoping that recovering the relic will inspire anti-Federation sentiment amongst the faithful.

Although the character only appeared in one episode of the original TV series (“City on the Edge of the World”), Bayban has long been a fan favourite. The interest of scriptwriter Niel Bushnell in bringing back the impulsive, reckless villain in a new story is matched only by the enthusiasm of actor Colin Baker to reprise the role. It’s something that shines through in his ebullient performance. This is a fitting return for a character already exhibiting his impetuous, self-absorbed side long before his encounter with Vila and his Liberator companions.

Second story “Mercenary”, written by Christopher Cooper, explores the scale of the challenge that Avalon faces in inspiring and equipping a revolution. She has already shown herself willing to make common cause with someone like Bayban and appropriate religious conviction as a springboard for revolt. In “Mercenary”, she’s decided to offer herself and Madison as experts for hire in a dubious mission for an even more suspect king-pin in return for weapons with which she might arm new insurgents. Reluctant new crew member (and former Federation data analyst, introduced in Volume One‘s “Throwback”) Madison is not a fan of heroic gestures. His understandable outrage at Avalon’s duplicitous ways of working provide the episode’s main drama. Christopher Cooper’s script brings Madison’s personal dilemmas to life particularly effectively, and Cliff Chapman once again delivers a fine performance in the role delivering just the right blend of sensitivity and exasperation.

Madison is a well-drawn character in his own right, but it’s not too much of a stretch to see aspects of other Liberator crew members in his nature. Madison has Vila’s instinct for self-preservation and his deep aversion to risk. But he also shares Orac’s superciliousness and self-regard as to his own abilities. The clash between that introspective persona and Avalon’s self-image as an adventurous revolutionary is the source of some well-drawn character conflicts.

Matters come to a head in the explosive events of “Heart of Ice” written by Steve Lyons. Avalon is once again on a mission to stir up revolt, this time as a stowaway on a Federation pursuit ship en route to the ice world of Cryonax. It leads her into close proximity with two of the most powerful figures in the Federation – Commander Travis and the President himself, who have their own reasons for being planet side.

As Travis’ plans to capture Blake unravel, and Avalon inspires a prison breakout to free jailed rebels, the stakes are raised through some impressively realised action sequences and atmospheric sound design. The story eventually locks in to the TV timeline and anticipates the events of the first series episode “Project Avalon”, which introduced the eponymous character.

Travis’ deferential manner towards his President surfaces some rarely revealed sides of Travis’ nature. It’s an inversion of the usual power dynamic around Travis, which Stephen Greif and Hugh Fraser explore to good effect. But as with the other episodes, this remains fundamentally Avalon’s story.

These two volumes of original adventures have defined her as a committed and fearless freedom fighter, but also as a rebel leader afflicted by tunnel vision. By the conclusion of “Heart of Ice”, Avalon is showing signs that she might be capable of rebalancing that identity with a stronger sense of empathy and humility.

This Big Finish Blake’s 7 spin-off has felt convincing and credible from the beginning. Thanks to the combination of strong scripts and Oliver Poulet’s thoughtful performance, Avalon has been able to take on the mantle of an icon of the anti-Federation rebellion without becoming a Roj Blake clone. 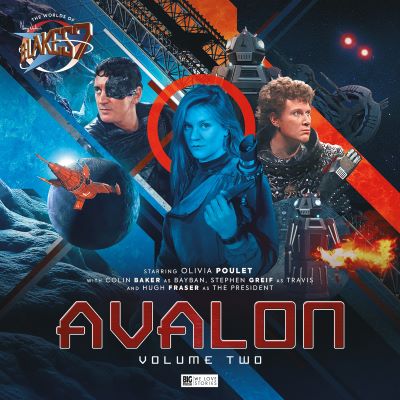