There’s intrigue, assignations and assassinations aplenty in Lucifer: Genesis, the concluding instalment in Paul Darrow’s epic exploration of the unseen history of the Blake’s 7 universe, now available for the first time as a single-voice audiobook.

Both of those audio versions had been voiced, with the expected eloquence and gravitas, by Darrow himself. After a period of ill-health, Paul Darrow sadly died in June 2019, before having a chance to begin work on the audiobook version of Lucifer: Genesis. Fortunately, Stephen Greif, the first actor to play the role of Blake’s and the crew’s nemesis Travis on Blake’s 7, agreed to step up to the challenge of voicing Darrow’s words, allowing the trilogy to be fully completed in all formats.

In recent years, Greif has narrated the Big Finish audiobooks Blake’s 7: Uprising (January 2019) and Blake’s 7: Outlaw (November 2019) to impressive effect. Greif brings the same talents to bear again, voicing a sizeable array of characters, both new and familiar, across what is a large and complex narrative.

Darrow here crafts further rich detail into an intricate backstory for both Avon and Servalan. This is a web of conspiracies and double-dealing, of crafty schemes and clever deceits. It’s a tale packed with new characters and interactions that reverberate through the life stories of both these protagonists. All of which unfolds in a sophisticated geo-political world that Darrow puts together with considerable thought and precision.

All the empires of Earth – China, Russia and American most notably – clash and become entangled in the struggle for ever greater spheres of influence. Meanwhile, Servalan ruthlessly seeks advancement through the ranks of the upper echelons of the Federation. Avon plays an equally meticulous hand, as he seeks a path that will best advance his selfish interests that are, in their own way, no less avaricious – even if they lack Servalan’s ice-cold meglomania.

Darrow clearly enjoys hinting at the parallels between the self-serving actions of Servalan and Avon, returning time and again to compare the drive for self-aggrandisement evident in both their natures. Just as notable, is Darrow’s focus on Avon’s challenge to Blake’s self-image as a selfless revolutionary and a servant of the galaxy’s oppressed. It’s through Avon that Darrow channels the critique of the Liberator‘s leader, suggesting that Blake’s true motives might mirror Servalan’s own in ways that he does not recognise. A thread that recurs in several of the TV scripts, it’s something given extra prominence here.

With the opening sections of the book detailing the early lives of both Avon and Servalan, things move on apace in the pages that follow. Darrow stitches the threads of his original story into the existing TV canon with close attention to continuity. Not all genre actors who become authors in their own fictional worlds demonstrate so clear a grasp of its established history. But Darrow’s familiarity with the chronology of Blake’s 7 is reassuringly evident here.

The later sections of the book push the timeline beyond the devastating events of the TV finale “Blake”. In the company of just one other (non-human) member of the crew, an older though not much wiser Avon is still battling against the new post-Federation tyrannies gripping the galaxy and fighting to retain his freedom. It’s a quest that comes to a definitive conclusion here, at least as perceived by the much-missed and seemingly universally well-liked Paul Darrow.

As with the other Blake’s 7 audiobooks he has voiced, Greif’s engaging tones avoid the lure of impersonation. Instead, he focuses on providing texture and depth in his characterisation in a way that brings out the emotional resonance of the author’s prose particularly well. Darrow enjoys depicting machinations, power struggles and skullduggery amongst the ranks of the galaxy’s most powerful elites. The clarity and focus of Greif’s delivery make what is sometimes a densely rendered story of duplicity and double-dealing that much easier for the listener to follow.

In the short self-directed Q&A session that completes this release, Stephen Greif is generous and affectionate in his recollections of Paul Darrow. He is entirely undaunted by the task of bringing the Lucifer trilogy to a conclusion on audio. Greif says it feels both natural and fitting to be able to fully complete the fictional lifestory of this singular anti-hero on behalf of his colleague and friend: someone who, for countless Blake’s 7 fans, will remain ‘forever Avon’. 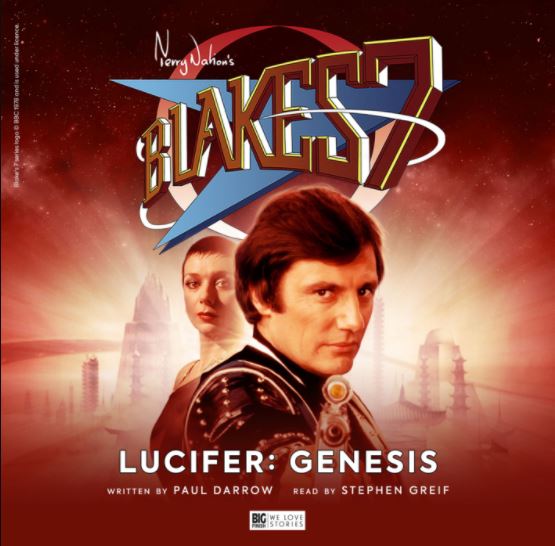