Despite his being a bona-fide British sci-fi icon, we have to confess that CultBox was not terribly familiar with the exploits of Colonel Dan Dare.

Born of 1950s comic strip adventures in The Eagle, before radio plays and various adaptations, the square-jawed ‘Pilot of the Future’ has been gently modernised and returns to the airwaves thanks to a collaboration between B7 Media and Big Finish.

Wisely, this box set demands no foreknowledge as it introduces Dare at the start of his space adventures when the test pilot is recruited to front a new space mission. The first of three hour-long tales, ‘Voyage to Venus’, by Richard Kurti and Bev Doyle, promptly sets up the backstory before launching Dare (Ed Stoppard) and his minimal crew in the good ship Anastasia.

Privately funded by the mysterious Eagle Corporation, with technology retro-fitted from a crashed alien ship, Dare is accompanied by scientist Professor Peabody (Heida Reed) and the gruff, realistic Lieutenant Digby (Geoff McGivern) who knew his father. With Dare chosen for his poster boy looks as much as his piloting skills, there is a palpable tension between the three from the off.

Following the clues left by an alien freedom fighter, the trio promptly find themselves in hot water when they are captured and brought before the calculating, unemotional Mekon (Raad Rawi), who commands a vast city by his will alone.

James Swallow pens ‘The Red Moon Mystery’, which brings both a family connection and tensions between the Eagle Corporation and the Earth Space Agency, as the crew investigate a loss of contact with a secretive Martian outpost and discover Dare’s estranged Uncle Ivor. Finally, Marc Platt’s ‘Marooned on Mercury’ sees the crew once again encounter the ice cold machinations of the villainous Mekon as he enacts his revenge. 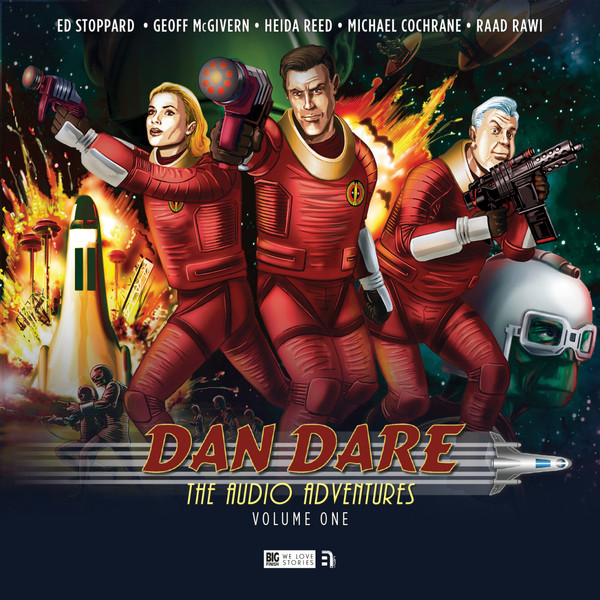 Hailing from a simpler time, despite references which make this adaptation feel current, Ed Stoppard’s Dare remains is an likable idealist; full of heroic swagger and with a healthy disrespect for the rules, not least because of the chip on his shoulder surrounding his father’s fate, an accident which left Dare Snr. comatose and the space programme suspended.

If Dare is principled, his crewmates seem more pragmatic, although early tensions between Dare and Geoff McGivern’s spiky Digby mellow as the two earn a respect for each other. For her part, Heida Reed (Poldark’s Elizabeth), impresses as Peabody who is often put on the spot with her company responsibilities, and remains mostly immune to Dare’s matinee idol charms.

The stories themselves are absorbing, with terrific audio soundscapes, and combine imaginative action set pieces with plenty of entertaining character moments. They manage the feat of feeling both traditional, in their uncomplicated storytelling, and yet modern and fresh too.

With the events of ‘Voyage to Venus’ resulting in Dare and friends being unable to go home, there’s an underpinning quest and this is built on by an excellent cliffhanger ending to the set.

Thankfully, a second volume of three adventures is scheduled for release in April, so there is not too long to wait.

Released in December 2016 by Big Finish.

What did you think of the release? Let us know below…