For the penultimate Companion Chronicles story, we return to an old favourite. Continuing from where 2010’s ‘Find and Replace’ left off, Jo Jones (née Grant) is off on an adventure with the irrepressible Iris Wildthyme.

For those not acquainted with Ms Wildthyme, the trans-temporal adventuress, suffice to say that she is a sometime ally, sometime thorn in the side of the Doctor who takes a much more relaxed attitude to time travel. The pair have crossed paths on numerous occasions, in both audio and prose, and Iris even has her own series of audio tales.

Hailing from the mysterious Obverse, Iris shares many characteristics with the Time Lord and has her own time machine which takes the form of a Red London Bus but is smaller on the inside.

Arriving in 1930s Hollywood, Jo is swept along with the excitement of time travel again after all these years. There is initially a clash of ideologies to be dealt with though, because while Jo is used to responsible time travel as espoused by the Doctor, Iris’ first action on arrival is create an anachronism outside Grauman’s Chinese Theatre, Hollywood Boulevard on her mobile phone.

Heading off to crash a glamorous party, with the aid of some psychic money, trouble soon comes their way as they encounter a Hollywood Diva named Vita Monette. Vita is famously responsible for a series of monster features, but even she doesn’t expect to have one of her stars crash the party, apparently terrifyingly real! 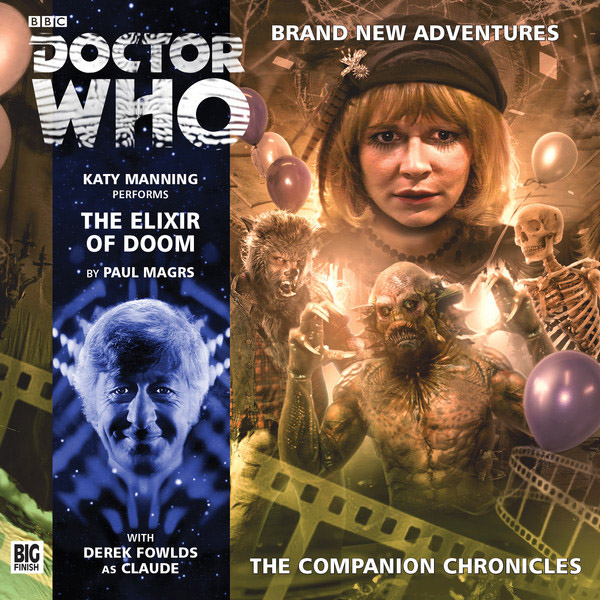 It soon transpires that Iris has some history with Vita from the time of silent movies and she is not the only one looking into the film director. A familiar face is at the party, but perhaps not the one we were expecting…

Katy Manning is on fine form in what is essentially a triple-header with herself, enthusiastically providing voices for Jo and Iris as well as the devilish Vita Monette. Derek Fowlds ably supports in the role of Monsieur Claude, Vita’s put upon husband who is party to her dark secret.

Paul Magrs’ tale blends the comic and the horrific, with a villain who is truly out for herself, but its heart is the charming paring of an older and more worldly-wise Jo with his most irreverent creation.

For her part, Iris remains as entertaining as ever. Despite it being Jo’s tale, she consciously grabs the narration duties on occasion, littering her reminiscences with gags and knowing asides. There are melancholic notes heard from Iris too, who seems desperate to keep hold of her new travelling companion and makes a surprising admission.

With ‘The Elixir of Doom’ apparently stated as Iris’ last hurrah for Big Finish, we are happy to say she has gone out with style… but we will keep hoping that the No. 22 to Putney will roll into view again when the Doctor least expects it!

Released in May 2014 by Big Finish Productions Ltd.