In this collection they are also joined for most of the stories by River Song (Alex Kingston) following her appearance in the previous box set. All the listener needs to know is bad things are afoot and instead of Daleks this series has focussed on the threat from a range of Time Lords.

Doom Coalition will run over four box sets (so we are told) and much of this set is spent enjoying the characters rather than rushing about from pillar to post in pursuit of the bigger story. This is not to say nothing happens – far from it.

The first story is John Dorney’s ‘Absent Friends’, where the plot is just enough to keep the Doctor distracted while Liv and Helen both get to examine their past lives in intense detail. The episode is particularly cathartic and gives insight into the characters and allows Helen to flirt with one of the ‘rules’ of time travel – the story is set in the late 1990s and gives Helen to chance to explore what happened next in her own life, as this is decades after she began travelling in the TARDIS. 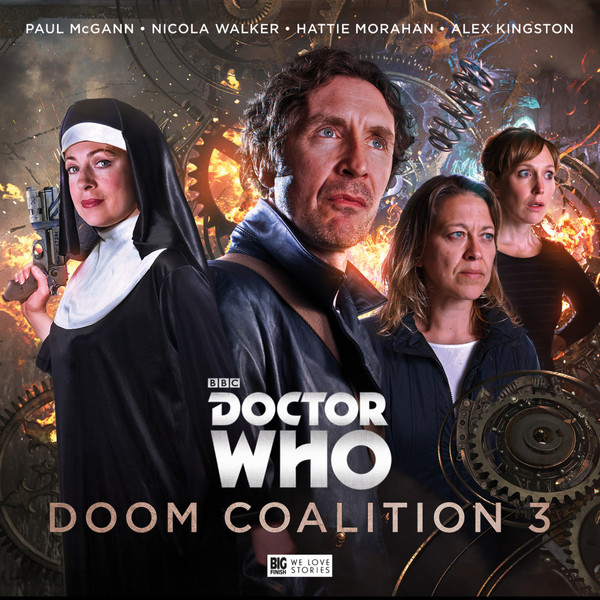 Matt Fitton wrote the middle two stories ‘The Eighth Piece’ and ‘The Doomsday Chronometer’; in these he deliberately splits the Doctor, Liv and Helen in three different time zones. This allows for a complex time-spanning story and the appearance of River Song. River is wonderful in the guise of a nun (see the cover image) and the story unwinds over the episodes with one or two surprise reveals before segueing into the final story for this set.

John Dorney took charge for the wonderfully named ‘The Crucible of Souls’ where we start to learn more of the bigger picture driving the whole set of four Doom Coalition stories. This has the effect of setting up the story for the next set more than answering the questions posed in this one, but enough happens to keep listeners gripped.

The extended TARDIS crew are all operating on a level now in terms of plot, and River Song takes more of a backseat and Alex Kingston’s performance is toned down to allow her and the Doctor to spend a lot of time together without overdoing the mystery of why she isn’t remembered by his future incarnation. There is plenty to mull over as we wait for the final set of stories, and more than a hint that perhaps Helen or even Liv might be doomed.

Big Finish’s Eighth Doctor stories have a history of killing off companions and while this fits with the story, fingers crossed all our favourites emerge in one shape or another at the end of this well-realised arc of stories.

Extras: A whole disc packed with behind the scenes insight and interviews.

What did you think of Doom Coalition 3? Let us know below…