2015’s audio revival of Terrahawks was a pleasant surprise to us. In truth, we had forgotten how funny and subversive the show could be.

Freed from the shackles of visual production, and buoyed by the success of Volume One, the follow-up continues to be both warm and deeply irreverent – this time gleefully poking fun at other Anderson shows.

First up is ‘Sale of the Galaxy’, where both Zelda and Tiger Ninestein find themselves kidnapped by the twisted Nickel-plate Starsons and forced to play his very familiar games. In a moment of casting genius, Nicholas Parsons (riffing on his real-life marriage with Denise Bhryer) plays Zelda’s sadistic ex-husband, who also is apparently Yung-Star’s “Daddy”.

The pastiches come thick and fast; a murderous ventriloquist’s doll in ‘The Trouble with Toy Boys’ channels Torchy, while an amusing twist on a popular island based global rescue organisation gives us ‘Renta-Hawks’, who get right under Tiger Ninestein’s skin.

‘Return to Sender’ brings the Zeroids to the fore, grappling with an errant Martian probe and matters of the fairer sex; the mission forces Sergeant Major Zero to deal with a love-struck junior, the only gal for the job thanks to her particular software version… and of course a Zeroid’s 140 k average memory capacity! With Windsor Davies retired from acting, Jeremy Hitchins does a fine impersonation of the blustery senior Zeroid, while Beth Chalmers scores an instant hit as 35. 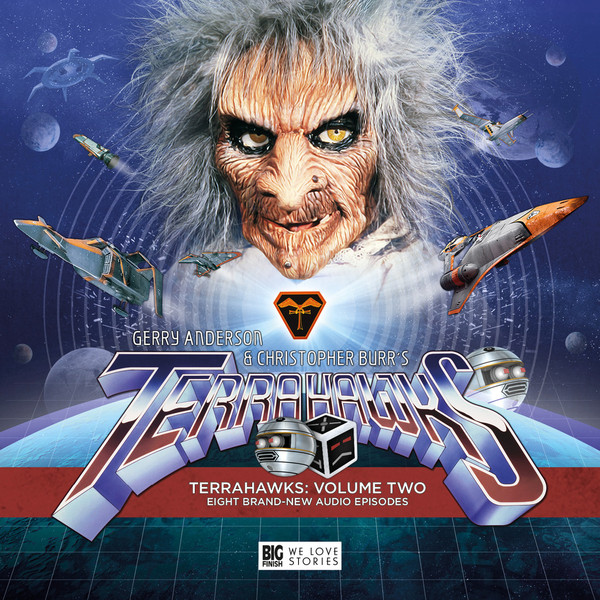 The latter half of the set sees Zelda absent and grants the incompetent Yung-Star and scheming It-Star centre stage. Their delightfully bonkers plan? To raise Zelda’s popularity with the general public through the medium of film. Of course, Hollywood producer Low Grade has his own ideas and there are plenty of worthy gags abroad here too, not least that Ninestein is a fan.

‘My Enemy’s Enemy’ is the epic, hour long tale series finale and takes us back to Zelda’s creation on the planet of Zuk. As well as filling in her back story admirably, even managing to stir some compassion for the old hag, it also heralds the most tremendous space battle. All credit must go to sound designer Steve Foxon for his work, some of which is detailed in a fascinating section of the accompanying extras.

As well as recreating the main core of Terrahawks and Martians, the hard working and horrendously talented cast also bring to life all the guest characters, from Stew Dapples and Dick Branston to the villainous Count Anaconda and his big top of grotesques which include such delights as regurgitators and zombies!

Terrahawks remains as daft and loveable as ever, with plenty of excitement, a dash of the grotesque and a healthy dollop or two of satire. Though the finale seems pretty climatic, we are keeping our fingers firmly crossed for a further series of launches from Hawknest.

Stay on this channel!