Of all the programmes in the late Gerry Anderson’s back catalogue, Terrahawks is one we were not expecting to be granted an audio afterlife.

Originally produced in 1983, it mixed latex puppetry and model effects work with comedy, rather than the more straight laced drama of Stingray or Thunderbirds, to entertain for three season.

Being of a certain age, the show does a place in our affections though and we are pleased to say that any cynicism at the idea of an audio revival was promptly blown away within moments of hearing that impossibly catchy, Star Wars-esque electronic theme tune.

In a cleverly written opener entitled ‘The Price is Right’ director Jamie Anderson (son of Gerry), restates the show’s format; the human and robotic Terrahawks defending the Earth from repeated attacks from the ghastly cackling android Zelda, based on Mars. The tale pokes a little gentle fun as we learn about 10-codes, not-so-secret bases and Zelda’s motley crew of inept relatives.

Across four discs, this volume demonstrates the show’s range from the serious ‘A Clone of My Own’, where Dr Ninestein is called to account over his living backup duplicates, to the frankly bonkers ‘Clubbed to Death’, a satire on pay-day loan companies that sees Zelda almost bankrupt the Earth.

We particularly enjoyed ‘No Laughing Matter’, where a cyborg Johnny Vegas was deployed to use atrocious puns and bad jokes in an attempt to distract the Terrahawks and learn the location of their secret base. 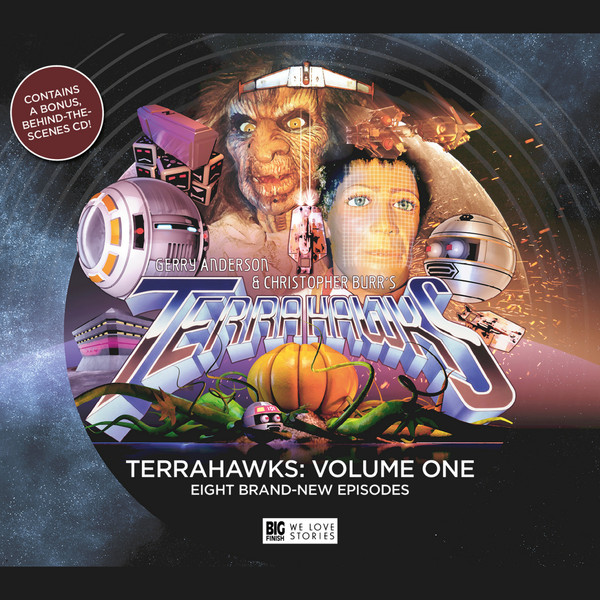 All of the surviving cast have returned, save for the now retired Windsor Davies, and each take on multiple roles as in the original production. Big Finish stalwart Beth Chalmers steps in to voice Kate Kestrel and Cy-Star in place of the late Anne Ridley.

Make no mistake, Terrahawks is incredibly daft at times, but it is also tremendously good fun with high adventure, silly voices and terrible puns all lovingly recreated in the spirit of the original.

Extras: The set comes with comprehensive interviews with director Jamie Anderson and the cast, tracking the return of the series and the creation of its authentic sounding 1980’s soundscape.

Released in April 2015 by Big Finish.