The latest in an occasional series of one-on-one in-depth interviews with actors from the world of genre entertainment, Big Finish’s new In Conversation release focuses on the professional and personal life of Carolyn Seymour.

Best known for her appearances in TV series like Star Trek and Quantum Leap, and above all for her leading role as Abby Grant in Terry Nation’s 1970s post-apocalyptic series Survivors, Seymour has secured the kind of viable career longevity in the acting profession that has eluded many of her peers. Over the decades, she’s had the opportunity to work in the worlds of film, TV and theatre on both sides of the Atlantic.

Far from being a safe and sanitized promotional fluff piece, this is a revealing and candid discussion in which Seymour is refreshingly honest about the challenges, as well as the triumphs, of more than five decades devoted to working on stage and screen. Here Seymour takes the time to reflect on the different experiences of each of these aspects of the actor’s life. Her recollections are disarmingly direct, and full of entertaining anecdotes and revealing stories which come across as genuine and without artifice.

Before she moves on to discuss her acting life, she provides a revealing account of growing up in what was a far from ordinary family. The parents’ and grandparents’ life-stories (on both maternal and paternal sides) are extraordinary, and populated with singular, distinctive individuals whose intersections with pivotal moments in the history of the twentieth century feel anything but incidental.

Seymour presents these biographical sketches with the kind of warmth and colour found in the best written biographies. But Seymour extemporises these family histories with such natural confidence and fluency that the listener feels they are being drawn into a confidential personal conversation. She’s a very engaging raconteur, and the self-assuredness that this suggests gives credence to her assertion that she’s secured more roles by the persuasive power of her personality and reputation than by competitive audition.

She manages to tell revealing stories without being salacious or breaking confidences as tales from her professional life arev threaded through the careers of many other famous names from her generation of thespians. At other times, Seymour is uncompromising in revealing the darker periods in her personal and professional life.

The misuse of alcohol has blighted the career of many talented actors. Seymour recounts her own battles with alcohol dependency with a refreshing degree of unsentimental honesty. She acknowledges just how toxic those periods in her life when her relationship with booze has been out of control have been for her and those around her.

Seymour’s discussion of her work on Survivors covers ground that will be familiar to the show’s more knowledgeable fans. But her memories of this pivotal period in her professional career remain vivid and are engagingly told. She describes the negotiations that led to her securing the role; the importance of the triumvirate of the show’s leading characters (Abby, Greg and Jenny); and the passion she felt about taking on the role of the redoubtable Abby Grant.

She vividly describes the immediately confrontational relationship with Survivors‘ producer Terry Dudley that would seal her fate on the show at the end of the first series. Her characterisation of Dudley is unflinchingly harsh, even as she admits that she could match his inflexible implacability demand-for-demand. She describes a far better relationship with the show’s crew, with whom she sometimes enjoyed high-risk drinking games at the end of the day’s recording.

Rarely reticient about putting her own point of view across, Seymour famously objected to the conclusion of the script for the classic first series Survivors episode “Law and Order”. Clive Exton’s script ends with a double tragedy: a community compelled to carry out a sentence of capital punishment on a convicted murderer (a vulnerable adult); and a case of wrongful conviction, in which the guilty party only confesses after an innocent man has been put to death.

It’s riveting dramatic material, brilliantly written and compellingly realised on screen. But Seymour’s personal objection to the use of the death penalty led her to lobby vociferously, if without success, for a different outcome to the story. More than forty years later, she’s unrepentant about her actions.

But the episode became emblematic of the broken relationship between her and Dudley, in which she became a “problem” rather than an asset and, when in the thrall of alcohol, an unreliable star. While it’s evident just how painful it felt to be sacked from the series, she picked herself up after the setback and was soon pursuing new opportunities in the USA.

There are interesting parallels between Seymour’s arrival in the States and that of Survivors‘ creator Terry Nation, who also fell out with Dudley and quit Survivors, a show he had created. Like Nation, Seymour had no profile in the US, and work was initially hard to find.

Yet Seymour pressed on and, with encouragement and help from others, carved out a credible career in the US. Roles in Star Trek played a key role in that new professional era, and Seymour speaks warmly about the enthusiasm of the franchise’s fans and their attempts to reflect aspects of the Roddenberry ethos in their personal lives.

Throughout their wide-ranging conversation, Toby Hadoke is an assured host; adept at putting Seymour at ease and allowing her gregarious nature full and open rein. Seymour is in turn effusive in her praise for Big Finish and her delight at become a recurring member of the company’s ensemble of audio voice talent.

Now in her seventies, Seymour remains animated and principled: backing the efforts of the #MeToo movement, determined that new generations of young actors avoid the terrible experiences she endured in the industry; and railing against injustice, inequality, discrimination and the mistreatment of humans and of animals.

By the end of this two hour-encounter, the listener can only come away understanding just how resilient a survivor Carolyn Seymour has proved to be. It’s clear that her directness, and her passionate advocacy for what she believes in, have been the cause of some professional setbacks. But it’s just as evident that it’s the same drive, determination and self-belief that have propelled her through more than five productive decades in an actor’s life. 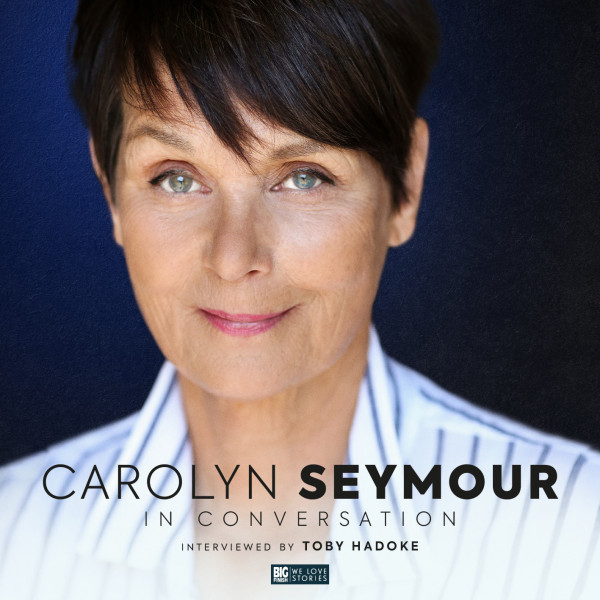 Carolyn Seymour: in Coversation is available to buy as a digital download from the Big Finish site