‘I don’t know if you’ll ever hear this Clara, I don’t even know if you’re still alive out there. But you were good! And you made a mighty fine Doctor…’

That’s not from ‘Face the Raven’, but you, loyal Who fan, knew that. Just as you know it’s from ‘Flatline’ – coincidentally the last time was saw Rigsy, and also the first time Clara properly played at being The Doctor.

And it wouldn’t be her last. A couple of episodes later she’d briefly fool the Cybermen (and the title sequence) and claim she was the Time Lord. And from then on she never stopped; defying every perfect opportunity of an exit (looking at you, ‘Death in Heaven’, ‘Last Christmas’), and becoming more confident, more Doctor-ish, until The Doctor himself had to remind her not to ‘go native’ in ‘Under the Lake’.

Because there’s only one Doctor. And playing at being The Doctor gets you killed. Of course it does. It even gets The Doctor killed now and then. But she’s not really taken any notice of that, as ‘Face the Raven’ reminds us from the get-go. 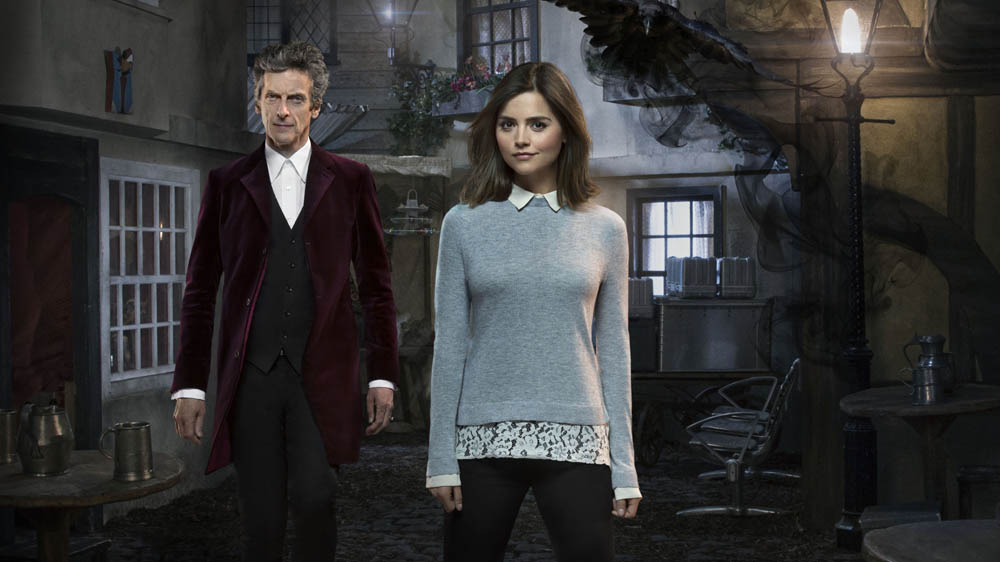 Clara is fighting off amorous plant monsters and hanging out of the TARDIS with wild abandon and generally living as if her entire life is a Friday night. She’s come a long way since she was on the back of a bike, hanging onto Eleven. ‘It’s an ongoing problem,’ The Doctor remarks to Rigsy, hinting at a story/character arc that hasn’t quite been as prominent as it could have been.

Ah, Rigsy! It’s really nice to see Joivan Wade’s character again. He’s gained an adorable baby but recently lost a day of his life and woken up with a tattoo that’s counting down. Still, better than getting one of those badly-translated Chinese ones that’s meant to say ‘peace’ but ends up reading as ‘goat pipe’.

So it’s off to a London ‘trap street’ (the episode’s original title) which contains an alien Diagon Alley, where interplanetary refugees and the contents of the costume cupboard at Roath Lock Studios live in goat pipe, sorry, peace. It’s a rather good idea, and like all the best ideas in Doctor Who, something that could be used more in the future. 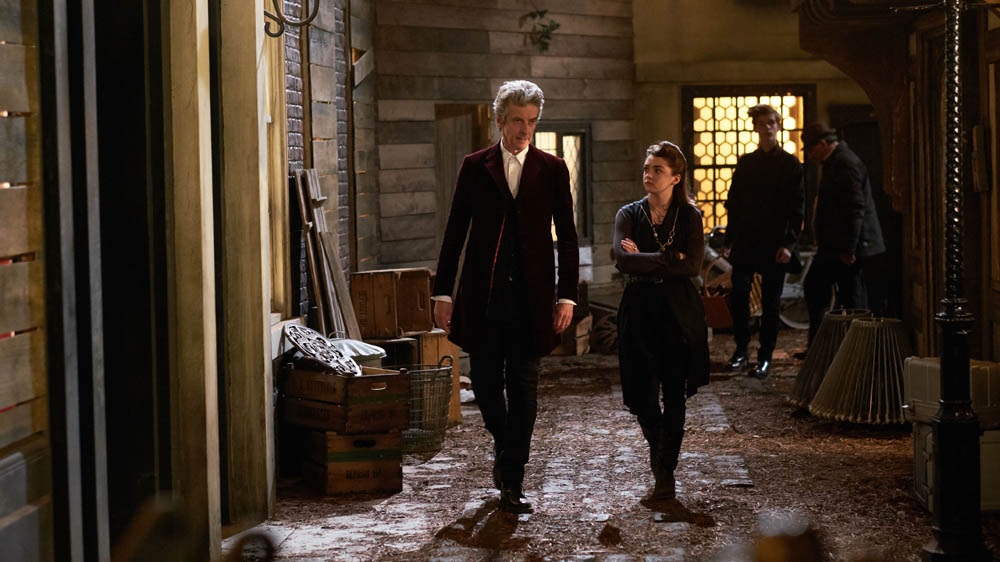 Keeping tight control over this interstellar street is Ashildr/Lady Me (Maisie Williams, but you know that by now), which would be a wonderful surprise if the show hadn’t been so keen to spoil her being in it. The BBC really are quite keen on you knowing things that would be best left as surprises this year, aren’t they?

Apparently Rigsy’s guilty of murdering a Janus, and it’s time for The Doctor (in his smart clothes for the first time this season) and Clara to Columbo their way through the population and prove his innocence before he’s killed by the inescapable Quantum Shade/Raven. Ooh, good, Doctor Who hasn’t done a murder mystery since Season 4’s ‘The Unicorn and the Wasp’.

But wait, no, this isn’t a murder. It’s a trick, a trap. Stick your hand in here Doctor! ‘Face the Raven’ is much like Season 3’s ‘Utopia’, in giving your brain something mildly diverting to chew on for 35 minutes before delivering the real wallop in the final 10. 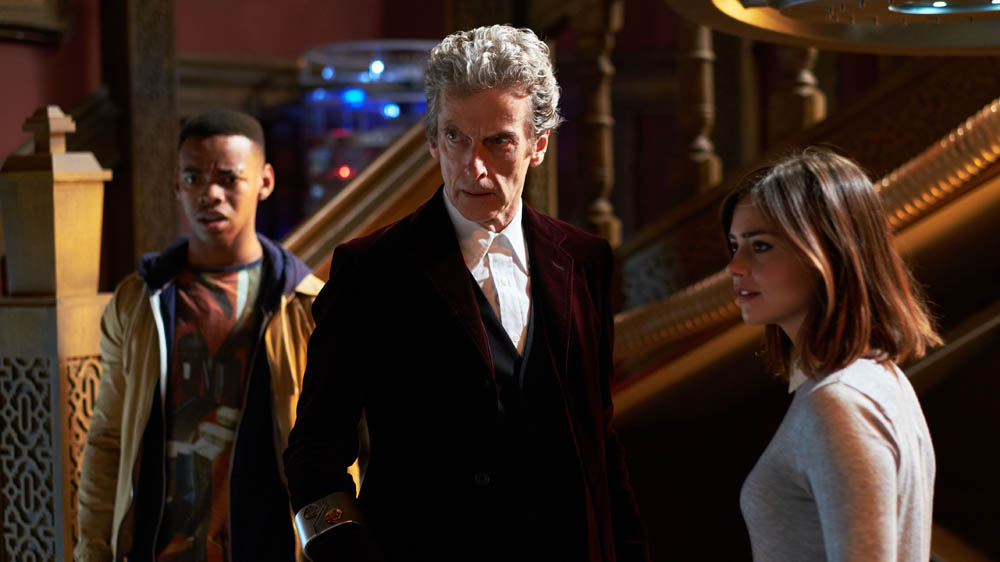 It’s a credit to Who newcomer Sarah Dollard’s script that everything that comes before, while completely disposable, still holds attention. And when things do get serious, ‘Face the Raven’ moves from a three-star sideshow to a five-star bit of theatre: intimate, grand, emotive.

Even before the episode aired you probably knew what it would be. Clara’s death. Actual, proper death. The Big Adric. Something that doesn’t happen often in this show. Even the Ponds got to live to death.

Clara gets cocky and thinks she can ‘out-Doctor’ The Doctor by cheating a bird. Hubris is her downfall. It doesn’t feel unfair in that regard. Clara isn’t a victim of circumstance but of choice, even if that choice is a terrible choice. And unlike The Doctor, she has to face up to the consequences of what she’s done. No running this time, you clever boy.

Sarah Dollard strikes exactly the right note between stoic and sentimental, and Jenna Coleman really does sell it; giving a death that is, let’s face it, ridiculous, some real emotional meaning. Capaldi too. So much so that I was suddenly aware of the moistness of my eyeballs. I grew up on Rod Hull’s Emu harassing people, but who knew being hit by a bird could be so devastating? 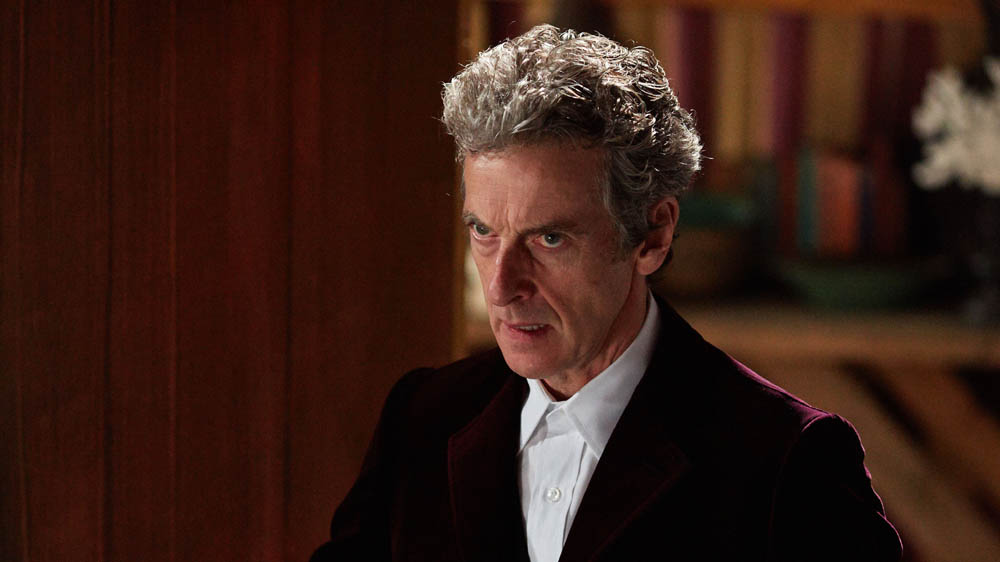 It’s moving, definitely. Is it the best way Clara Oswald could have left the show? No. Arguably ‘Last Christmas’ would have been the definitive Clara exit. But Clara hung in there. She courted danger and excitement and paid the price.

Clara Oswald, the Impossible Girl, born to save The Doctor; who blew into the world on a leaf, and bowed out on a raven’s wing. Or, to put it less poetically, got hit by a sci-fi bird and died.

Whichever way you want to look at it Coleman made it count, as she did across her entire run on the show, and while the direction that her character was heading put many off, her presence will be missed. She’s left big shoes to fill for whoever remarks on the TARDIS interior next.

This was textbook Doctor Who: ambitious, flawed, excellent. Exhausting then exhilarating. Familiar and frightening.

Alliterate away. At least until next week’s ‘Heaven Sent’. Because that’s when the textbook’s being thrown out the window…