It’s not hard to ‘say something nice’ about ‘Death in Heaven’.

It’s that rare episode under Moffat’s tenure: a Part 2 (this is the first since May 2011). It’s also that even rarer thing in 21st century Who: a finale as exciting as it is satisfying.

Satisfying not simply in terms of the immediate plot, or the longer-term storylines of its characters, but also in the tremendous amount of soul and poignancy supporting the cinematic action. There’s a plot-relevant fondness for the show’s past without sacrificing the dramatic immediacy of the Cyber-present.

And what a Cyber-present Missy has gifted The Doctor. An army of the dead clanking around planet Earth, and what’s the first thing that humanity does? Take selfies. ‘The end comes, as it was always going to, down the end of a videophone’, a Time Lord with a floppier haircut once said. 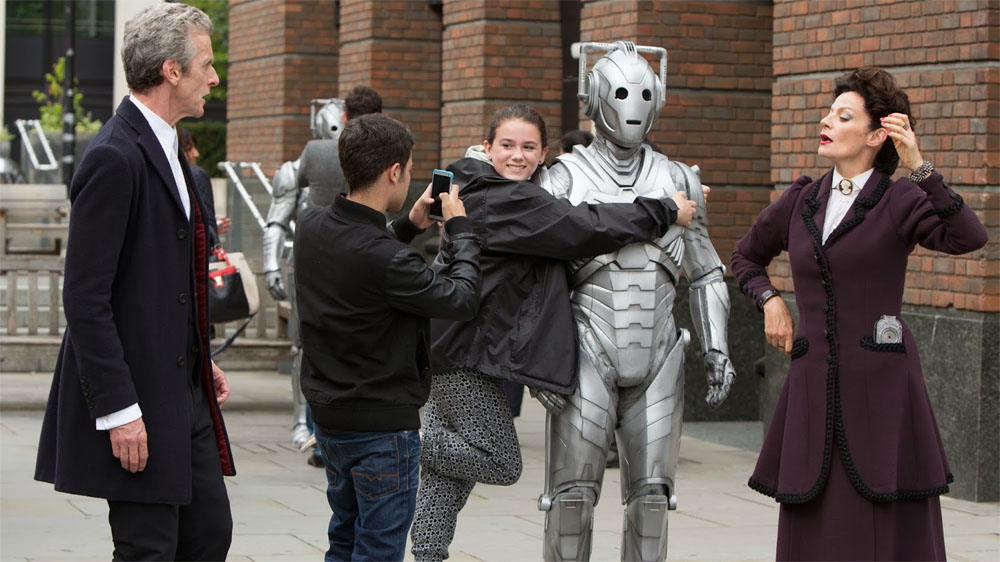 Clara Oswald’s channelling that same floppy-haired Doctor. Did anyone spend the title sequence – with its big inflatable Oswald eyes instead of the attack eyebrows – wondering if the show was about to pull off a gender-switch more daring than that of The Master’s? No, of course you didn’t. But it’s one last piece of impossible cheekiness for the Impossible Girl.

There have been accusations that Moffat’s female characters are all interchangeable, like lady Lego, bricked into the part. But that’s a disservice to the people playing those characters. Not just to Jenna Coleman. Look at the gusto Jemma Redgrave puts into defending the planet, or the bravery Ingrid Oliver imbues the late Osgood with. 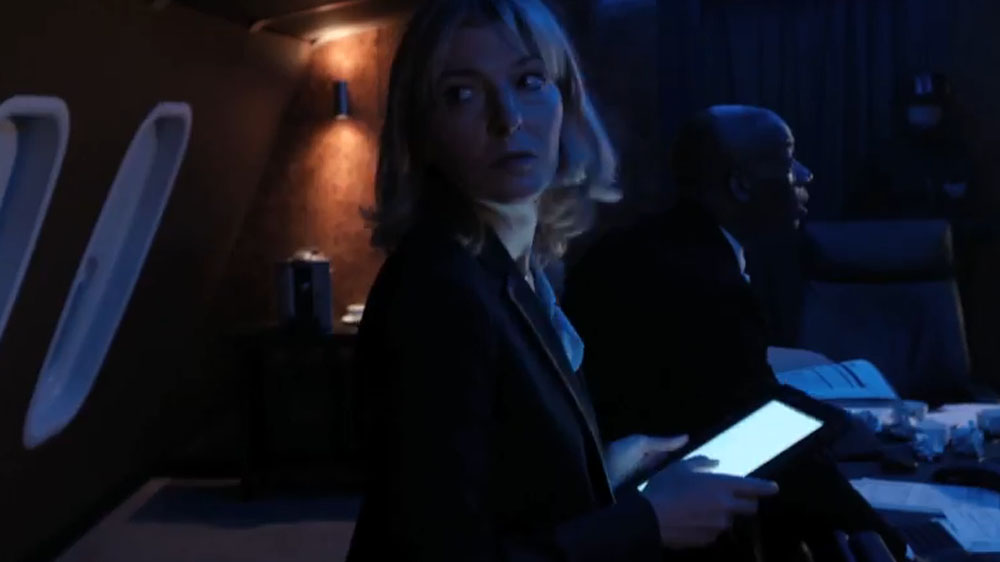 And then there’s the (Time) lady of the hour…

Michelle Gomez continues to astound; her portrayal of Missy oh so fine she blows our minds. Watch her even when she’s not saying anything and you can see the talent bursting out of her. The amount of effort Gomez puts in to make something look effortless is extraordinary. You really believe there’s over 40 years of madness behind the lipstick; she has redefined The Doctor’s definitive nemesis.

Against her insanity Capaldi beautifully executes the weariness of a man eternally fighting someone he’d rather love (take that as you will). Even with the aero-antics, there’s space to explore the rivalry and friendship that have kept them best of enemies, and for Moffat to make a satisfactory case for 40 years of enmity: Missy just wants her friend back, on her own terms. Psychiatrists, start your engines. 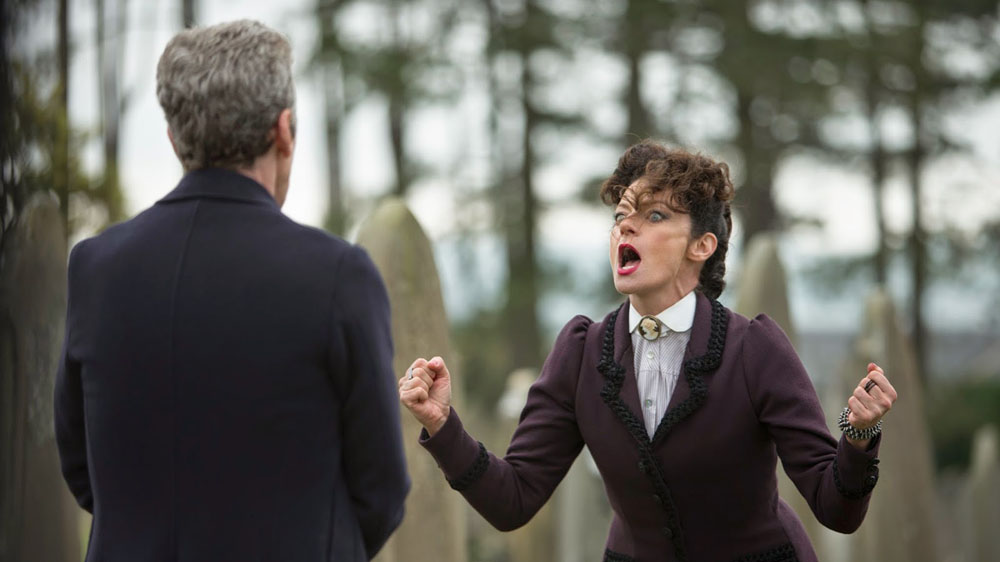 Capaldi remains the perfect Doctor, but living up to what he growled in ‘Robot of Sherwood’, he’s still not the ‘old-fashioned hero’ we think of him as. Hero duties fall to Cyber-Dan the tin soldier man, saving the day with his undead Iron Man P.E squad. We leave him exactly as we met him: giving orders. It hasn’t been Samuel Anderson’s fault that Danny has not been the most interesting chap this season, but his final scenes vindicate his character’s place in the show, and actually place Danny’s whole run in a more favourable light.

You’d have to have a heart of steel not to feel something as he gave his final farewell to Clara, just as you would to witness The Doctor’s first and final salute to the Cyber-Brigadier without feeling a nostalgic pang. A perfect soldier’s farewell. At ease Brig, you earned it. 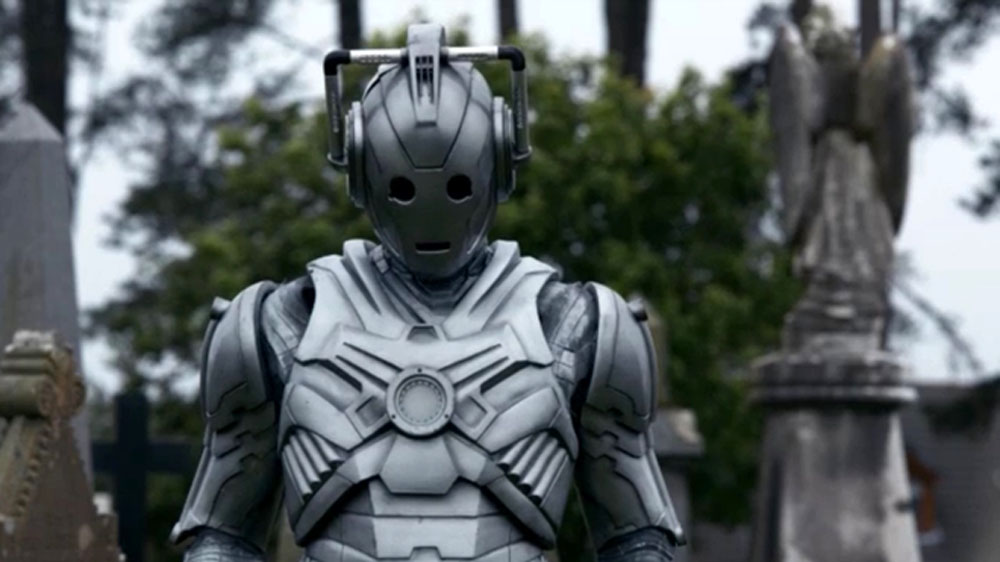 But the most resonant departure is left to last, as the Time Lord and Impossible Girl, brought together by mysteries and Master-plans, each depart on a lie. Because it’s easier. Because it makes them and the other person feel better. It’s sad and sweet, and if it was Jenna Coleman’s farewell to the show then it was pitch perfect.

Though some fans’ hearts may remain on the beach of Dårlig Ulv Stranden, or in the Noble family’s front room, or on a suburban street in Dundee that’s meant to be Croydon, it’s possibly the best goodbye since a young-old man lied to his granddaughter about returning one day. Yes, one day.

There’ll be plenty of time to autopsy Season 8 now it’s over. For now though, let’s savour an episode that epitomises what we always hoped Peter Capaldi’s opening season would be: something that made The Doctor, Clara, and best of all, our Saturday nights, feel special again.