Here’s our spoiler-free Doctor Who ‘Empress of Mars’ review.

It always feels like fandom holds its breath just before a new Mark Gatiss episode comes along, wary about what they’re about to see. Will it be top class Who or a Saturday night stinker? An ‘Unquiet Dead’, or a ‘Victory of the Daleks’? A ‘Crimson Horror’, or a ‘Sleep No More’?

(By the way, if you don’t like ‘The Crimson Horror’ you may as well stop reading now, and we can no longer be friends).

Doctor Who through a filter

Mark Gatiss gets more stick than he deserves from some fans, possibly because his episodes are always ‘Doctor Who through the filter of a specific genre’, and sometimes that simply doesn’t work. ‘Unquiet Dead’ was a Dickensian ghost story, ‘Sleep No More’ a found footage horror, ‘Crimson Horror’ classic camp Hammer Horror, ‘Victory of the Daleks’ a WW2 film with aliens. Take a look at any of his episodes and – good or bad – they’re always defined by a strong aesthetic. 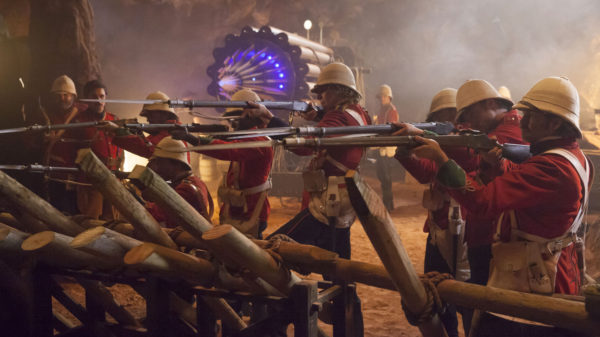 So what is ‘Empress of Mars’, Gatiss’ ninth Doctor Who episode? It’s very clearly an HG Wells tribute (Gatiss is no stranger to Wells’ work, having starred in the 2010 adaptation of First Men in the Moon), with what some will call a ‘steampunk‘ aesthetic. Really, though, it’s closer to images from Victorian and Edwardian sci-fi. 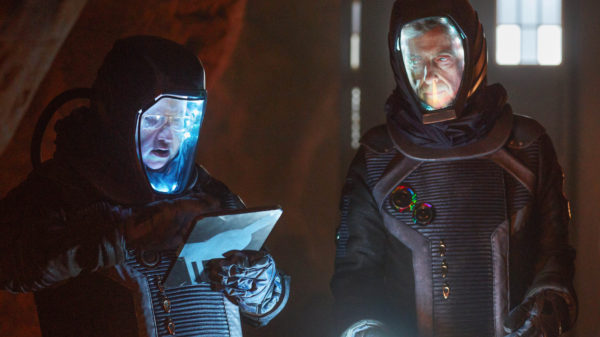 More importantly, is it any good? Gatiss’ claustrophobic ‘Cold War’ was a very fine re-introduction to the Ice Warriors, and ‘Empress of Mars’ bears many similarities. It feels similarly claustrophobic and, once again, has a small military force pitted against the Martians with The Doctor stuck in the middle. It doesn’t quite match it for quality, however.

A Boys Own adventure

Mars, 1881, and there’s a contingent of the British Army digging around in the underground caverns. Victorians on Mars? How did they get there? What are they digging for? Answers come quickly, as do Ice Warrior appearances. Soon the Ice Queen awakens, looking like the Predator and sounding like the Empress of the Racnoss, and then it’s Blighty’s troops versus creatures armed with guns that crush you into a little cube of flesh and clothes.

Despite the outlandish premise, it’s actually a very straightforward story, and the idea of the humans being the invaders never quite fulfils its potential, partly because the explanation for how the soldiers reached Mars in the first place undermines it.

There’s also a lot of ‘Boys Own Adventure’ style talk – all ‘tally-ho’s’, ‘deuces’, ‘jolly-wells’ and the like. That’s all part of the tone that the episode is going for, but halfway through it begins to rankle.

The Ice Warriors don’t feel anywhere near as menacing as they did in ‘Cold War’. Sorry to keep comparing, but there it was ‘unstoppable tank aboard a submarine’. Yet here, in their native land, they feel oddly generic. It could be any old alien shooting men with a ray gun that turns them into cubes (it really is a cool ray gun).

The good, the bad, and the hint-y

If it sounds like ‘Empress of Mars’ is not good then I’ve unwittingly misled you. It’s just not great. Certainly not as great as its outlandish premise, or its writer, could be. It’s less than the sum of its parts, but there are plenty of parts to like.

The Ice Warriors look great. The Martian caverns and Ice Warrior hives also look great, in a very Classic Who sort of way. Peter Capaldi and Pearl Mackie are still wonderful in a way that makes you painfully aware of how close to the end of their time together we are. 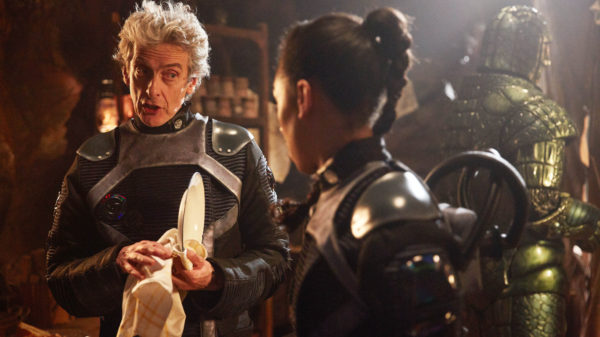 Speaking of ends, there is a very nice little cameo toward the end that longtime fans will enjoy immensely, but the very ending of the episode is a strange moment. One which may hint at how ‘different’ The Doctor’s regeneration is going to be, or how the series finale might shape out, but is so ambiguous that it feels like a limp finish that ‘Empress of Mars’ doesn’t deserve. It may work better on a re-watch once the series is over.

‘Empress of Mars’ is neither Gatiss at his finest, nor his worst, although that’s a statement that some will dispute. It’s one of those Doctor Who episodes that no one will agree on.

Although come to think of it, that describes almost every Doctor Who episode…

You can see our full Doctor Who series 10 episode guide here.