Doctor Who is back!

Peter Capaldi returns as the Doctor for 12 new episodes, joined in the TARDIS  by Pearl Mackie as Bill and Matt Lucas as Nardole.

Watch a clip from ‘The Pilot’…

A chance encounter with a girl with a star in her eye leads to a terrifying chase across time and space.

Bill’s mind is opened to a Universe that is bigger and more exciting than she could possibly have imagined – but who is the Doctor, and what is his secret mission with Nardole on Earth?

In the far future, at the edge of the galaxy, there is a gleaming, perfect city.

This brand new human settlement is said to hold the secret of human happiness – but the only smiles the Doctor and Bill can find are on a pile of grinning skulls.

Something is alive in the walls, and the emojibots are watching from the shadows, as the Doctor and Bill trying to unravel a terrifying mystery…

In Regency England, beneath the frozen Thames, something is stirring.

The Doctor and Bill arrive at the last of the great frost fairs, and find themselves investigating a string of impossible disappearances – people have been vanishing on the ice!

Bill is about to discover that the past is more like her world than she expected, and that not all monsters come from outer space…

Bill is moving in with some friends and they’ve found the perfect house – so what if it’s strangely cheap to rent, and the landlord is a little creepy?

The wind blows, the floorboards creak, and the Doctor thinks something is very wrong. What lurks in the strange tower at the heart of the building – and why can’t they find any way to enter it?

The Doctor, Bill and Nardole answer a distress call in deep space, and find themselves trapped on board space station Chasm Forge. All but four of the crew have been murdered – and the dead are still walking!

In a future where oxygen is sold by the breath, and space suits are valued more highly than their occupants, the TARDIS crew battle for survival against the darkest evil of all…

In the Haereticum – the Vatican’s secret library of blasphemy – there is an ancient book known only as The Veritas. Throughout history, anyone who has ever read it has immediately taken their own life.

Now a new translation is online, and the danger is spreading. The Vatican appeals to the Doctor. Will he read The Veritas? But can even the Doctor survive the ultimate truth?

Episode 7: ‘The Pyramid at the End of the World’ 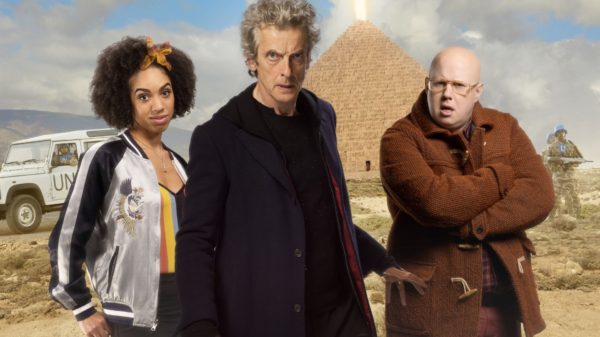 A 5,000 year-old Pyramid stands at the centre of a war zone, where the Chinese, Russian and American armies are about to clash. There are many problems with that, but the one that intrigues the Doctor is this: there wasn’t a pyramid there yesterday.

The Doctor, Bill and Nardole face an alien invasion unlike any other, and before conquest can begin, these aliens need the consent of the human race…

The BBC has also released the following clip…

… And you can also see a gallery of images from the episode here.

The episode was written by Peter Harness (Doctor Who – ‘The Zygon Invasion/Inversion’) and Steven Moffat, and directed by Daniel Nettheim (Doctor Who – ‘Extremis’, Broadchurch).

Episode 8: The Lie of the Land

“I’m sorry, Bill, I really wanted to make you see!”

“Oh my God, this is real. You’re really doing this!”

The world is gripped by a mass delusion and only Bill Potts can see the truth. When even the Doctor is fighting on the wrong side, it’s up to Bill to convince the Time Lord that humanity is in deadly danger. And if she can’t do that, she may just have to kill her best friend.

Lie of the Land was written by  Toby Whithouse (Various Doctor Who, Being Human) and  directed by Wayne Yip (Class, Misfits, Utopia).

The BBC has also released the following clips.

You can also see a big gallery of images from the episode here.

Episode 9: ‘The Empress of Mars’ 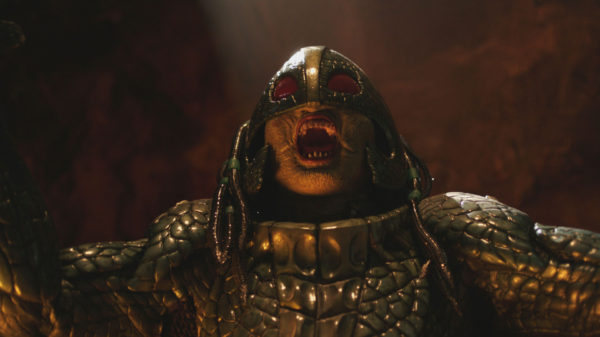 “It’s a simple choice, Iraxxa. The oldest one in the book. We must live together. Or die together.”

‘God save the Queen’ has been scrawled on the surface of Mars. What are Victorians doing on the home of the Ice Warriors? And what will they find beneath the Martian soil?

The Doctor, Bill and Nardole arrive on Mars and find themselves in an impossible conflict between Ice Warriors… and Victorian soldiers. As the Martian hive awakes around them, the Doctor faces a unique dilemma – this time the humans, not the Ice Warriors are the invaders. When Earth is invading Mars, whose side is he on?

This episode is written by Mark Gatiss, and directed by Wayne Yip (Class, Misfits, Utopia)

Here’s the new Next Time trailer…

“Now you have a choice. You can all keep on slaughtering each other till there’s no one left standing, or you can grow the hell up!”

A long time ago, the Roman legion of the ninth vanished into the mists of Scotland. Bill has a theory about what happened, and the Doctor has a time machine. But when they arrive in ancient Aberdeenshire, what they find is a far greater threat than any army. In a cairn, on a hillside, is a doorway leading to the end of the world.

This episode is written by Rona Munro (who last wrote for Doctor Who in 1989, specifically the Sylvester McCoy episode ‘Survival’) directed by Charles Palmer (whose previous Doctor Who directorial work includes ‘Smith & Jones’, ‘Family Of Blood’, and ‘Oxygen’.

Here’s the ‘Next Time’ trailer…

Friendship drives the Doctor into the rashest decision of his life. Trapped on a giant spaceship, caught in the event horizon of a black hole, he witnesses the death of someone he is pledged to protect. Is there any way he can redeem his mistake? Are events already out of control? For once, time is the Time Lord’s enemy…

The episode is written by Steven Moffat, and directed by Rachel Talalay

Here’s the ‘Next Time’ trailer…

“Without hope, without witness, without reward.”

The Mondasian Cybermen are on the rise. It’s time for the Doctor’s final battle…

The episode is written by Steven Moffat, and directed by Rachel Talalay