After a slightly lacklustre opener last week that promised more than it delivered, things are escalated on all levels as we see the consequences of the spreading fire.

Having established all the necessary elements that the show will explore in the remaining episodes, we see more of what could make the show a stand out drama.

Everything feels heightened this week to coincide with the continuing uproar of the fire and the personal situations of those affected by it. Andrew Buchan’s Thomas is attacked by an angry crowd who blame him for the fire, in a seriously claustrophobic and well-constructed scene as the Londoners try to escape the city. Buchan again continues to impress, creating in Thomas a sort of flawed anti-hero, limited by his societal role as a baker, a father and an outcast.

Sarah’s story becomes more prominent too, giving Rose Leslie a chance to shine. Her grief over missing her son, her confusion over Lord Denton’s betrayal and her feisty attitude towards a fellow prisoner all add more colour to what was an already excellent performance. Yet it’s her character’s interactions with inmate Vincent (Andrew Tiernan) that really strike a chord.

The King Charles II (Jack Huston) storyline gains speed too though, with him seeing what his adoring public really think of him and how he has to step up and be seen as a leader to the people, earning his position. Huston plays it with just the right amount of naivety, bravado and a little bit of fear to make it believable. Adding to this, the treacherous actions of his brother, Duke James, who is working with the Catholics to potentially overthrow Charles from his seat and the drama continues to ramp up successfully. 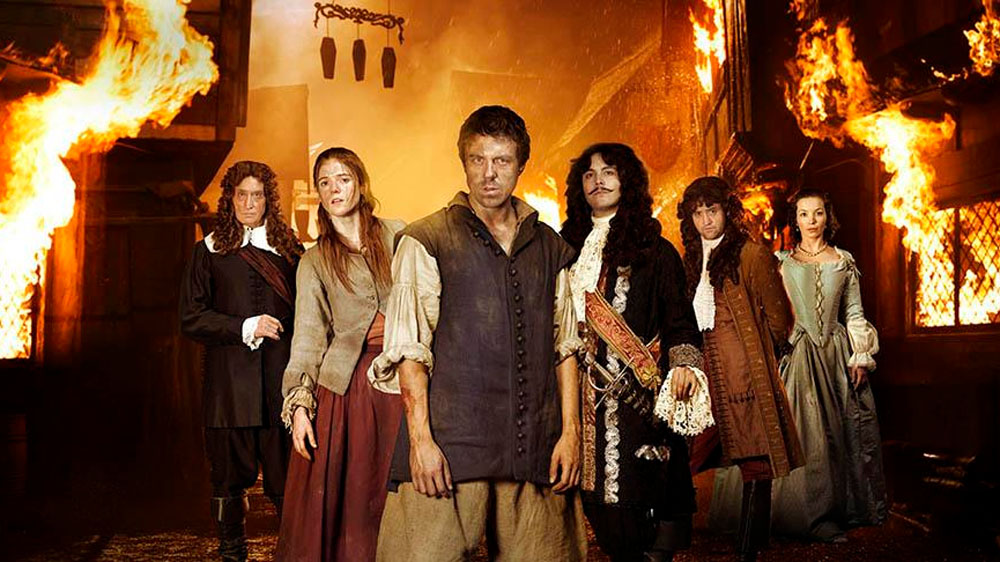 Small nods to the time add a strong historical element to the show, such as the medieval torture methods Lord Denton uses to make his victims talk, the looting created by the fire as the evacuation continues and the realistic portrayal of the slum-like dungeon prisons. The production values are more obvious here than they were last week and the episode is all the better for it.

Even the smaller roles are expanded on here; in particular Perdita Weeks as Mrs Pepys, who acts as much as a moral compass to her husband, as he acts to the King – an act of decency made all the worse when she realises that her husband has been sleeping with Mrs Bagwell behind her back. We also get a nice turn from Geoff Bell as ferryman Wilson and a small but effective turn by William Beck as the odious Richard Smith, Lord Denton’s right hand man.

Smaller plot strands are woven into the story such as Denton’s desire to take down Lord Haddleford using Sarah and Samuel Pepys coming up against the established members of the Kings council who are willing to do anything to protect the King, even if it means going against his own wishes. Historically, these actions had major consequences for the monarchy at that time so it’s great to see them touched upon here.

A definite improvement on last week’s episode, this second instalment felt like it had more room to breathe and wisely used the fire as a backdrop to highlight the struggles and the problems of those around it, rather than be the sole focus of the problems themselves.

What did you think of The Great Fire so far? Let us know below…