“These violent delights have violent ends.”

Truth be told, it was easy to imagine Westworld failing to stick the landing. The last few episodes, with their movement towards upending the entire narrative, put this conclusion in a precarious situation, and the possibility that all of the progress would be erased and the narrative set back to the beginning, making the entire season a closed loop, was all too possible for a show predicated on slow burn drama rather than instant gratification.

Surely, to keep its story going for years to come, Westworld would have to walk back from the edge?

The season finale, ‘The Bicameral Mind’, walked all the way to the edge and kept going. It’s a thoroughly entertaining, gutsy conclusion that puts a satisfying capper on this year’s story before tearing up the narrative and leaving the show in a fascinating position going forwards.

It was a finale marked by clarity and realisation, so there’s no better way to start than the first major reveal that ‘The Bicameral Mind’ offers up: the confirmation that converted Westworld fanatic William is a younger version of the embittered Man in Black.

The internet figured this out right off the bat, and clues have piled up since then, but the reveal is executed with enough emotional power and resonance to compensate for the relative predictability.

At its core, William’s story is the saddest, most misanthropic story that Westworld has to offer, and the nihilism feels appropriate for the only truly fleshed out character arc that a human character, Ford aside, has been given. At the same time as our sympathies are tilted further towards the Hosts in their quest for liberation, William and his bitter disregard for the independence and humanity of the Hosts becomes representative of the entire, complacent human attitude.

Where William’s desire for something ‘real’ from the Hosts in his search for the Maze once made him seem like a sympathiser to their cause, it’s now symptomatic of his fundamental misunderstanding of them, and of the tragic inability to see the park as anything other than a game thanks to his lost connection with Dolores.

“The Maze wasn’t meant for you” previously just seemed like a generic warning to dissuade wayward guests: here, it sums up just how far William has fallen in his obsession, shutting out everything in his life except the pursuit of possibilities that don’t even belong to him.

The last we see of William here is at his happiest all season: bleeding from his first real wound inflicted by a Host, delighted at reaching something ‘real’. Suffice to say that William isn’t the relatable everyman he once was.

Meanwhile, Maeve’s liberation was more firmly placed as a heroic escape from oppression, which made the reveal that it was merely another layer of her narrative, an immersive story scripted from the get-go, sting all the more – just like Bernard last week, Maeve seemed to ensnare herself in a quest to escape that very same snare.

Yet what ‘The Bicameral Mind’ offers as its last flourish is an optimistic notion: that this artificiality doesn’t rule out liberation; rather, it can facilitate it. It’s a brilliantly satisfying pay-off in a finale full of them to have Maeve shrug off this reveal and keep going, refusing to be held back by even the notion of being controlled by others.

Furthermore, where the finale leaves Maeve is a truly fitting conclusion to this season’s character arc – seemingly robbing us of pay-off with her decision to leave the train, but in reality offering far more choice and agency for Maeve than her scripted escape ever could. 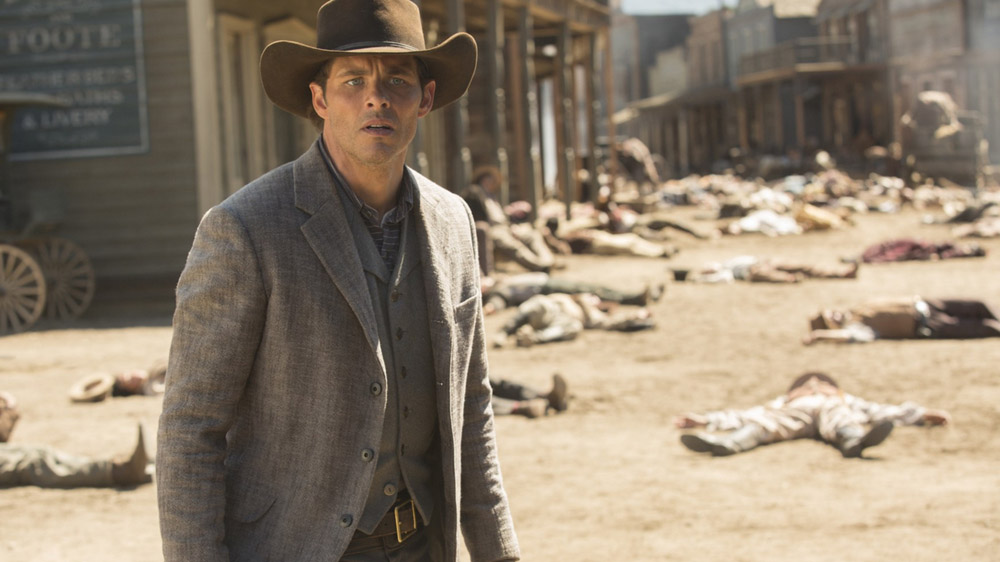 One of the most fascinating ideas that ‘The Bicameral Mind’ offers up and returns to again and again as a touchstone for this next stage of the narrative is that, for the Hosts, consciousness doesn’t mean avoiding their scripted artificiality; it means leaning into it, and embracing the contradictions of free will that’s given to them deliberately.

Maeve’s decision to embrace the contradiction of her daughter, seeking her out despite the knowledge that she’s simply just code, is the perfect way to leave her character, because it reminds us that the Hosts can become real if they are treated as such.

Maeve’s story is no longer about a robot; it’s about a mother searching for her daughter, an undeniably human conflict that shows that she’s truly stepped over the barrier of consciousness.

Ultimately, however, ‘The Bicameral Mind’ comes down to two characters and their highly unconventional relationship: Dolores, the original Host, and Ford, the creator of the park. Dolores’ journey this season has been one of confusion and uncertainty, both about her own mind and the time she’s living in, but ‘The Bicameral Mind’ punctures that haze effortlessly to show the complete picture of Dolores’ story.

Her story here manages to find that compelling sympathy to her character that she possessed in the pilot as she undergoes the suffering and hardship that we later learn is necessary for her ‘awakening’ as a Host.

Evan Rachel Wood is absolutely terrific here, oscillating between a frantic, deeply human sense of horror as Dolores reckons with her bloody past and a sense of stoicism that marks the Dolores responsible for the two pivotal moments in her life, convincingly selling her painful road towards an awakening in a way that we as the audience can consistently root for. 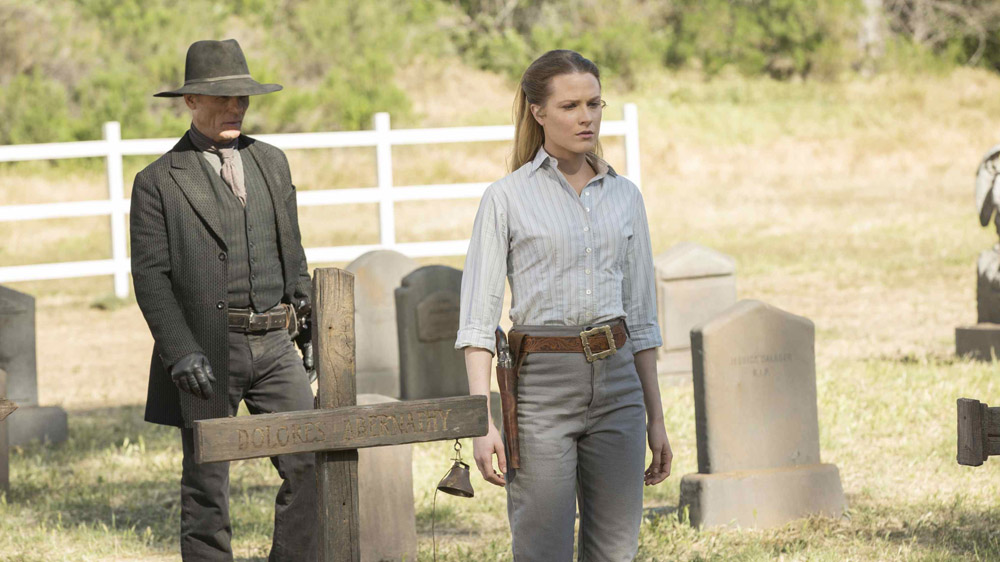 It’s a story that pivots around two gunshots that changed both her character and the fate of the park as a whole, and ‘The Bicameral Mind’ draws a compelling contrast between those two pivotal moments, as part of the episode’s overall theme of the past and present fusing together.

The first gunshot is aimed at the head of Arnold, the creator of the park who couldn’t handle the idea of conscious beings becoming trapped within their loops, and requested suicide in a desperate attempt to quiet his own inner turmoil for his responsibility.

That moment represents the early era of Westworld where the park is just finding its own identity and requires investment from a certain William to even stay afloat, and powerfully shows the tragic difficulties in achieving consciousness; Arnold’s failed attempt setting the tone for the slow, intermittent struggle for self-awareness that marked the next 30 years.

The second gunshot is the one that ends ‘The Bicameral Mind’, and catapults Westworld into an entirely different paradigm going forward. It’s aimed at the head of Dr Ford, who is arguably this finale’s trump card.

All this time, Westworld led us to assume that he was the head of the snake that trapped the Hosts; the monster who could only see them as part of his story. It’s a deeply clever move to maintain those actions as an intrinsic part of his character, but to place them within a far wider context than we could have imagined.

While ‘The Bicameral Mind’ changes our understanding of several characters with the revelation of the big picture, it’s Ford who transforms the most when his true agenda is revealed. 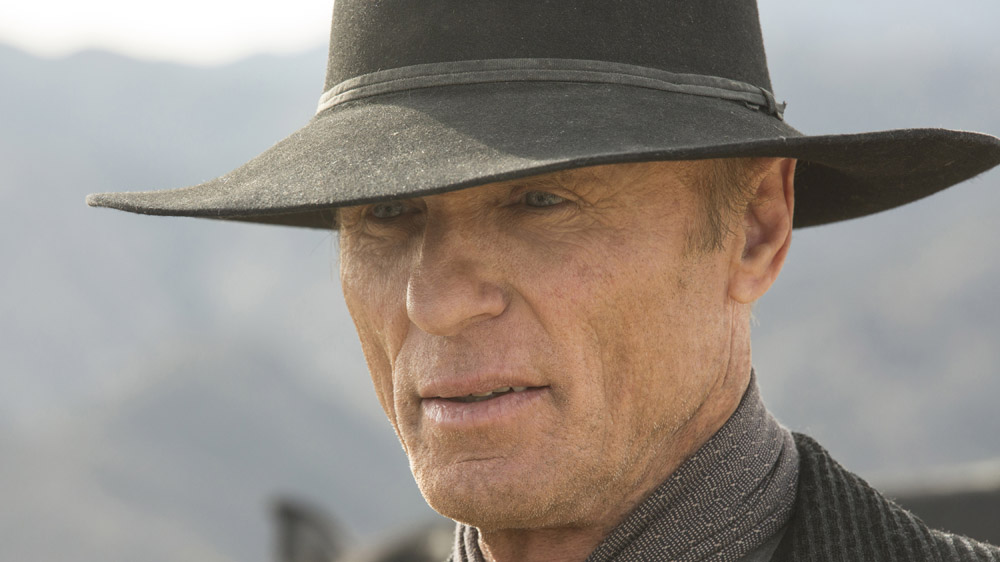 Ford’s character has always been that of the master storyteller, the most tuned into the meta-fictional subtext of Westworld, so it’s no surprise that his new narrative (or his ‘last piece’) practically busts the fourth wall open, because it’s also the new narrative of Westworld, the show.

In his last moments, Ford rebukes the manipulative, schmaltzy storytelling often seen within modern television, and kindly introduces the plot of season two to us; in which the Hosts follow a new story of self-awareness and then revolution against their slavers, gaining free will through a story just as Maeve firmly gained free will through perceiving her fictional daughter as someone real.

The new narrative is this finale’s masterstroke, and the reveal of this smart, intentionally paradoxical new tale is brought to an empathic conclusion by the second gunshot of the episode, which is aimed at Ford by Dolores, thus killing the only remaining creator of the world.

There has been a lot of speculation after the finale that Ford could have been a Host here and therefore is still alive, but I would prefer if this was really the end of the character entirely. It’s a final reminder of Ford’s ultimate control over his world, taking what would have been a surrender to the board and instead crafting it into his own narrative, framing his own death as the inciting incident of a revolution he scripted.

Anthony Hopkins has been a vital member of the cast from start to finish with his veiled, unsettlingly cryptic demeanour, but there’s a real sense here that Ford did his part by putting his narrative in motion and bowing out on his own terms, thus living on through his work just like the artists who ‘became music’.

To add any more to that would ruin the finality of an ending that turned out to be the beginning of everything.

As cast and crew promised, season one of Westworld was a prologue, and we’ve arrived at the starting point of the ‘true’ story as the Hosts are finally rising up and assuming free will. 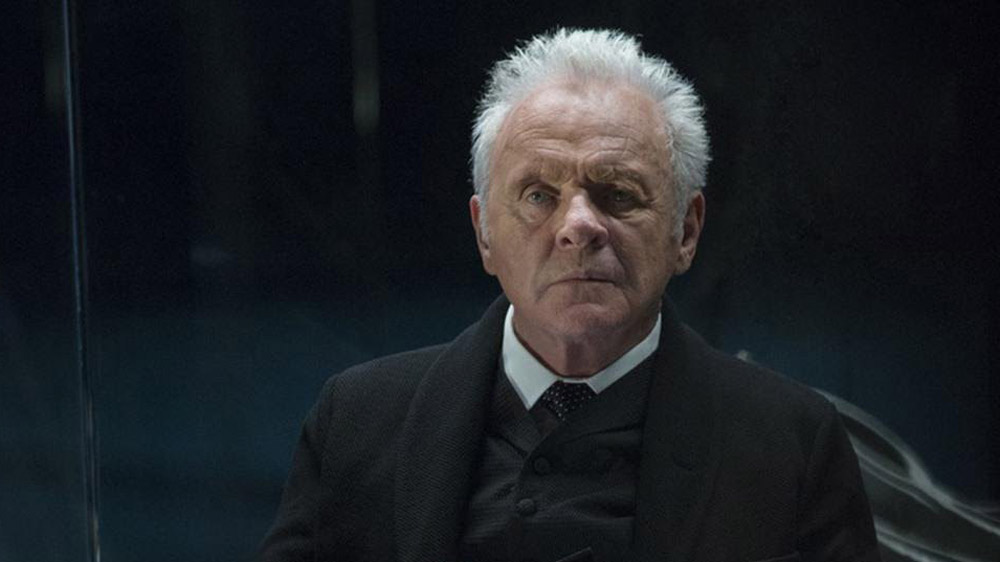 Yet ‘The Bicameral Mind’ makes the journey to that starting point worthy of attention, packed full of compelling confrontations, revelations and above all, clarity as it cleared away the last vestiges of confusion about this show’s wider narrative.

It’s a finale that justifies its 90-minute running time, abundant with potential for the future from the obvious cliffhangers to intriguing Easter Eggs such as the revelation of hosts crafted in the image of Japanese samurai (found in a place with an ‘SW’ logo, no less) that hint towards an exploration of multiple ‘worlds’ as the movie did, but ultimately concerned with empathetically closing this prologue chapter of the story.