Enthused by the positive critical reaction that greeted the release of Breakaway, an updated retelling of the pilot episode of ITC’s 1970s TV sci-fi romp, Big Finish have now released the first volume of three Space 1999 audio dramas.

With the moon launched into deep-space and pushed through a worm-hole, the fate of humanity back on Earth remains a mystery. With Moonbase Alpha now five light years from home, Commander Koenig and his loyal officers now confront three challenges: keeping everyone alive; searching for a way these Terran refugees might return home; and, if that quest fails, locating a new planet on which to resettle. This first volume of deep-space adventures features two new stories, both written by Andrew Smith, and a ‘reimagining’ of a first series TV script, adapted by Roland Moore.

Several things immediately stand out about this release. Performances in Space 1999 are consistently strong. With the most mellifluous of tones, Mark Bonnar is instantly believable in the role of Commander Koenig. Rather than being a detached figurehead, he’s realised here as an astute and personable leader of his team. He has the necessary gravitas and authority, but he has good empathic and people skills too. That sense of having an emotionally intelligent group of individuals at the heart of the drama is reinforced by Maria Teresa Creasey’s turn as tuned-in doctor Helena Russell and Clive Hayward’s likeable science boffin Professor Victor Bergman.

It’s also clear that the moral textures of Big Finish’s scripts are richer and more sophisticated than their TV antecedents. As a result, the cast get the opportunity to explore a greater emotional and tonal range than was afforded to the original television actors. That links to the sense that Space 1999 on audio is an ensemble work, rather than ha a sharply delineated lead back by supporting, second-tier players. The drama also benefits greatly from a cracking musical score and from Iain Meadows’ attentive sound design, which conjures up immersive three-dimensional spaces, be they the bulkheads of the moon station or the wide vistas of an alien landscape.

“The Siren Call” by Andrew Smith is an impressive opener. It’s the kind of original story that harks back to the signature of the first TV series. Koenig and his team encounter an alien civilisation that at first seems to offer salvation for the Alphans, but which turns out to be something far more complex and threatening.

Smith’s tale returns to the role of the planet Meta in the fate of the Earth’s moon; raised as a concern in the TV pilot but subsequently dropped unanswered. The script also seeds the idea, certain to resurface in later stories, of previous contact between the human race and extraterrestrial life; a connection between civilisations across the vastness of space known only to a chosen few.

“Death’s Other Dominion” by Roland Moore is adapted from the original teleplay by Anthony Terpiloff and Elizabeth Barrows. The TV script is a straightforward fantasy tale built around a commanding performance by Brian Blessed. It also includes some off-key plotting, as key crew members act completely out of character, which dilutes much of the sense of jeopardy.

Moore’s reworking is an altogether more astute and sure-footed affair. It also foregrounds the cost and consequences of immortality, in a much more interesting way that was achieved on TV. This confirms once again that Big Finish’s reading of the Space 1999 playbook is much more sophisticated and textured than the ITC source material when it comes to questions of morality and philosophy.

Without giving away the surprises of the plot, “Goldilocks” by Andrew Smith delivers the first proper monster-romp in the series. The Alphans have great hope that they have found a strong candidate for a ‘new Earth’. Life on their putative new home is lush and plentiful, and their initial assessment of its viability is encouraging. But this new world is far from the verdant idyll that it first appears, and the Alphans’ advance party is soon in serious trouble. This story offers some of the best action sequences in the release.

Although it’s a richer dramatic endeavour, Space 1999 on audio is still firmly moored to the same lunar logic that drove the TV series.

Future instalments will have to deal with the same ‘planet of the week’ challenges that confronted ITC Entertainment’s writers back in the 1970s. And if he’s to avoid becoming as tedious as Dr. Zachary Smith from Lost in Space, the officious Space Commissioner Simmons will need a good story arc of his own. Yet there’s no question from this impressive, confident and dramatically satisfying first volume, that the travellers of Space 1999 have a long interstellar journey ahead of them. 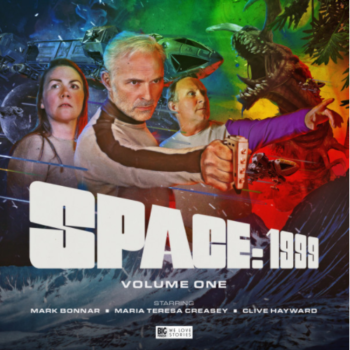 Space 1999: Volume One is available to buy, in CD and digital download formats, from the Big Finish site.