The Grey Man of the Mountain is the last solo outing for Sylvester McCoy’s seventh incarnation of the Doctor, before Big Finish winds up the monthly range with a final multi-Doctor story in March. Review to follow, of course.

Back to matters at hand, we’ve a story for the Doctor and Ace (Sophie Aldred) set in the more mountainous areas of Scotland, where they bump into none other than Brigadier Lethbridge-Stewart (Jon Culshaw). The Brigadier (this is post the TV story Battlefield) is ignoring retirement enough to look into rumours of Yeti. A nice idea, but one writer Lizbeth Myles overdoes a little. At no point would a fan who was intrigued by the idea believe it was actually going to happen. What we do get is a somewhat claustrophobic (at times) story with much wandering about mountains in snow, on the trail of people possible turned mad by the mysterious Grey Men, and by the Grey Men themselves. 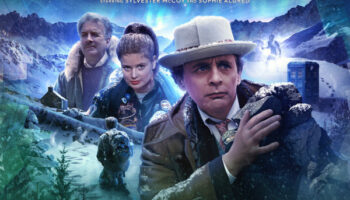 It’s atmospheric and well-timed as a winter tale, though the attempts to create a festive feel force an unnecessary carol singing and spoon playing scene into events. As ever it’s a strong central cast, and fellow writer Guy Adams appearing in a couple of parts, though some of the minor roles do feel a little vanilla. At times it’s easy to feel lockdown recording removed some of the chemistry Big Finish directors (in this case Samuel Clemens) normally excel at finding.

At heart this is a small story of a set location, rather than yet another overblown save the world / galaxy / universe / all of time bonanza, and is to be applauded for that.

In the final analysis, The Grey Man of the Mountain is enjoyable but feels overlong; it could easily have been compressed down to three episodes. The Grey Men themselves lack impact once revealed but the chemistry between Ace and Kirsty (Lucie Goldie) is a joy. And of course any outing for the Brigadier deserves attention, with the slightly fractious relationship between him and the Doctor adding a nice dimension too.

The Grey Man of the Mountain is available now in CD and download format from Big Finish. It comes with the usual behind the scenes material and music suite.