The Ninth Doctor Adventures – Ravagers sees Christopher Eccleston returning to the role of the Doctor. Sixteen years since his thirteen-episode run reignited the Doctor Who in the public consciousness, it is doubtless the biggest coup for Big Finish since persuading Tom Baker to return to the role, or indeed Paul McGann. 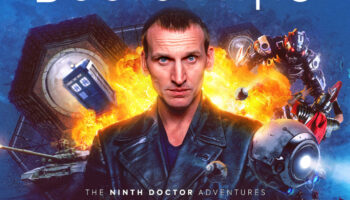 Ravagers is a three-part story, set before the events of Rose. Despite a few options available to them, BF has opted to forge a new era for the Ninth Doctor; we are told that all the forthcoming stories will be set at this point.

The Sphere of Freedom

Eschewing any conventional introductions, Ravagers hits the ground running. The Doctor and his new ally Nova appear to be at the culmination of an adventure; on the titular Sphere of Freedom, the Doctor is taking down a corrupt system of immersive games when it all goes horribly wrong.

Losing Nova down a time eddy, we learn what brought the Doctor here and how it links to a centuria of Roman soldiers, displaced in time to London 1959. We also learn of the Sphere’s creation and are introduced to the mysterious Audrey too.

As the story develops though Cataclysm and Food Fight, we follow multiple threads though different worlds and times. We discover the fate of Nova and the creation of the Sphere, as well as the events which brought Audrey to this point and the existential threat posed by the Ravagers themselves. The story addresses real world issues too, such as worker exploitation and recycling (in its most fundamental sense). It also contrasts the attitudes to battle of the Romans and the post-war British Army, with the Doctor offering his unique outsider’s perspective.

Christopher Eccleston’s Doctor is as vigorous and vivid as ever, truly sounding like he just walked off set in 2005. In the Extras, he talks about finding the character again quickly; his Doctor is quick-witted, joyful and happy to give people short shift too. Eccleston is very open and engaged, both with his thoughts on the story and his time on the television show.

Camilla Beeput shines as Nova, an indentured gally chef on the Sphere. She is sparky and gives as good as she gets. There is a sad backstory to her situation, but it is not unduly dwelt upon. A thoroughly modern companion, she reminded us of Bill Potts, though with a lot more sass. We would love to hear where she goes next.

As Audrey, Jayne McKenna give us a fascinating antagonist whose motivations and morals are complex. It’s a layered performance that certainly keeps you guessing. In the wider cast, Dan Starkey plays a bloodthirsty Roman centurion, not so far removed from his countless Sontarans. Jamie Parker and Ben Lee amuse as a pair of befuddled 1950s army officers too.

Writer/Director Nicholas Briggs’ scripts provide big, broad canvas storytelling and he clearly understands his audience. With a non-linear structure, he jumps around in time and space, building a three-part epic of enormous scope. From the sonic screwdriver to the psychic paper, the familiar New Series stylings are all present and correct and there’s a comic book feel too; this is a story more expansive and involved than a BBC budget could achieve. Both dramatic and comedic, it is not without restraint too – there is just one “fantastic” moment, but it is well worth waiting for.

All this is wrapped in an anthemic score from Howard Carter and an atmospheric, busy soundscape from Iain Meadows. It is a story we can imagine returning to multiple times to enjoy all the ins and outs.

In 2005, ‘the trip of a lifetime’ introduced both the Doctor and his universe to the modern viewer. Relieved of those duties here, the Ninth Doctor has room to breathe. While his onscreen adventures were primarily Earthbound, Ravagers comes at us head-on with a planet hopping, temporal conundrum full of universal implications.

Over the next few months, we look forward to this Doctor encountering the Cybermen and teaming up with the Brigadier. Frankly, we cannot wait. In many ways, it feels like a lifetime since the Ninth Doctor first burst onto our screens – it is a thrill to take another trip with him. Get ready to “run” again!

Doctor Who: The Ninth Doctor Adventures – Ravagers is available on download and CD from Big Finish. It is also available in a Limited Edition gatefold triple LP vinyl too.