It’s been eleven months since The Robots 4, which we felt was essential listening for connoisseurs — does this opinion still hold true? First a quick reminder of the bigger picture…

The story so far

As we noted previously, this series was conceived as a four-boxset tale, now given two more instalments. The central character is Liv Chenka (Nicola Walker) on a year’s sabbatical from the TARDIS; back home on Kaldor, she’s trying to get along with sister Tula (Claire Rushbrook). The series as a whole plays out against the backdrop first explored by Tom Baker’s Doctor on screen, revisited by Big Finish on audio by two later incarnations. There’s politics, crime, corruptions, revolution as well as AI, robots and deep rooted questions about the meaning of identity. With all this, Big Finish still finds room for some compelling drama.

New chip on the block

New (to Big Finish) writer Aaron Douglas starts the set with The Enhancement. In light of recent ‘security incidents’ (i.e. the past few boxsets), the Company has started a program of installing chips into the brains of employees ‘for their security’. Of course it’s about control, surveillance and other nefarious intentions. However, as Liv and Tula soon learn, it’s also about editing memories to match official company versions of history — unfortunately Tula has already had her chip fitted.

As the chip is one of the main themes of this new boxset, Aaron Douglas has to spend a lot of time setting it up, leading to a somewhat linear storyline. Despite the restriction, the story also blends in reference to what we might call Fake News and does a good job of questioning our assumptions of the meaning of identity when the memories we rely on have been gaslit by the Company.

Not one of us

With the enhancement chip established as a concept, Phil Mulryne writes Machines Like Us. It finds ways to circumvent the chip and reminds us of some of the many factions we’ve met so far. Here it’s the founding families, once the elite power on Kaldor, now supplanted by the Company.

Mulryne spends time leading Liv and newly promoted Tula in a spiral around a mystery as the company plans a major event for senior staff and Liv learns not everyone is how they seem to be. Add the threat of terrorism and tests of loyalty, and it’s business as usual on Kaldor.

Tim Foley brings the set to a close with Kaldor Nights. Set in the recording studios of the titular Kaldorian scripted reality show, the story feels forced at first; we do sometimes wonder if dramas with actors playing actors in a show are more entertaining for those behind the microphone than the listeners. Our other gripe is the cliffhanger ending, adding to the sense The Robots 5 and 6 are a pair.

Setting aside our complaints, it’s a good study of people and the cast of Kaldor Nights (or should we say talent) are well written. The robots also take on sinister overtones as we learn of more implications of the enhancement chips and yet another faction with yet another agenda.

We’re in two minds as to whether or not this is one ingredient too many, but will keep that thought parked for the next boxset on the assumption the patchwork of parties vying for control may yet be seen to be part of a more coherent design. 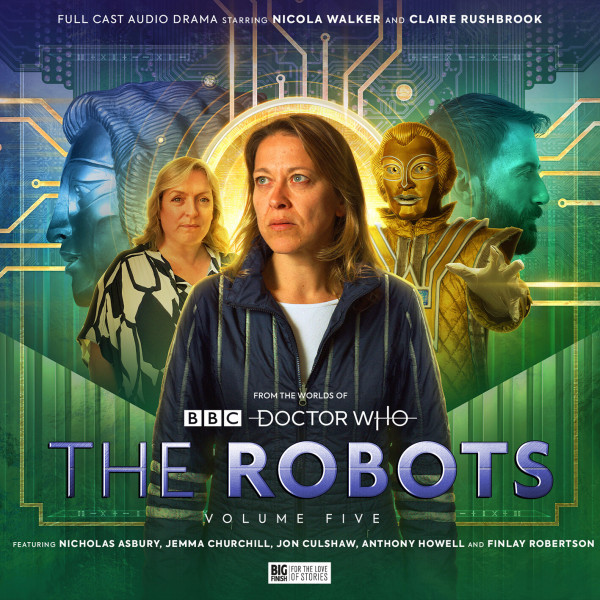 To our ears, The Robots 5 proves there’s plenty more to explore on Kaldor, and we look forward to finding out how it ends in The Robots 6 next January. It may be more words than actions, and entirely Doctor free, but this just avows the depth of storytelling the setting allows, the quality of the cast (directors, music, cover art…) and the writing. Not afraid to tackle modern themes, the stories avoid preaching and explore from multiple perspectives. It avoids being a coda to the first four sets though we do hope some of the rested themes re-emerge for the finale.

We suggest you give it a listen.

The Robots 5 is available in both CD and download format via the Big Finish site. If you’ve not heard the previous sets, bundle options are also available.