The latest monthly release in the Big Finish Torchwood range Empire of Shadows spins the timeline forward into the far-flung future, and flips the spotlight onto a character last heard from in the tenth Doctor TV episode The Satan Pit. Zachary “Zack” Cross Flane was first introduced in the previous series two episode The Impossible Planet, as a 43th century representative of the Torchwood Archive and acting captain on the Walker Expedition.

The new audio adventure begins as Zachary is instructed to attend the ceremonial opening of the library of the late Empress of the Earth Empire at the invitation of the current Emperor, her surviving son Merdiven (Mateo Oxley). Aware that the library contains classified materials collated by team Torchwood, Zachary feels duty-bound to attend. His trip is both helped and hindered by the presence of his companion, an AI ‘Sim’ named Chloe who is as knowledgeable as she is forthright.

Merdiven is a prickly party host: arrogant, blunt and self-regarding. But his actions do appear to be guided, at least in part, by a rudimentary moral compass and a concern to better the lot of the galaxy’s poorest. He could be forgiven for his lack of diplomatic talent. The lasting psychological damage he suffered when, as a small boy, he survived the assassination bid in which his mother and siblings died, has left him scarred.

But as the canapés are served and the wine flows, Merdiven becomes convinced that he is in mortal danger. Zachary and Chloe also sense that something is amiss, and things move quickly from the volatile to the explosive. Now the Torchwood librarian has a solo mission that’s far more challenging than a meet-and-greet. Zachary must find a way to preserve something that at least one person would claim is more valuable than all the files and manuscripts in the dusty vaults.

In the behind-the-scenes interviews, Shaun Parkes (Zachary) enthuses about the opportunity to reprise an intriguing character he first brought to life many years earlier. He clearly relishes the fact that this story enables him to flex his ‘action hero’ acting muscles. With Parkes delivering a spirited turn as the brave adventurer, he’s ably supported by Amanda Shodeko as AI Chloe. Shodeko captures the focused intelligence of an artificial entity that recognises its own existential worth, and is willing to repeatedly challenge Zachary’s more impulsive assumptions.

The interaction between the pair, and the shifts in their power dynamic as their predicament worsens, is one of the strongest elements of the drama.

As it unfolds, writer James Goss’ story exhibits many of the beats and plot motifs of a classic Doctor Who serial: exploring the political shenanigans of a declining interstellar empire whose leaders harbour dark secrets and whose authority is under challenge. On reflection, the strong Who influence in evidence here is perhaps no surprise. Given how far outside the known timeline this story is set, there’s no contemporary Torchwood canon to integrate with – so improvisation and world building is key.

Mixed into the fast-moving fight for survival deep in the catacombs are some interesting reflections on the nature of consciousness, and the balance between rights and obligations, which give the story some greater depth.

It’s true that the twists that wrap-up this standalone adventure are not that difficult to anticipate ahead of time. And with this one-off story unfolding on the temporal fringes of the Torchwood universe, there’s little sense here that events of great import are unfolding. But there’s certainly enough happening in the shadows of this particular empire to hold the attention of the listener right up to the disquieting but believable finale. 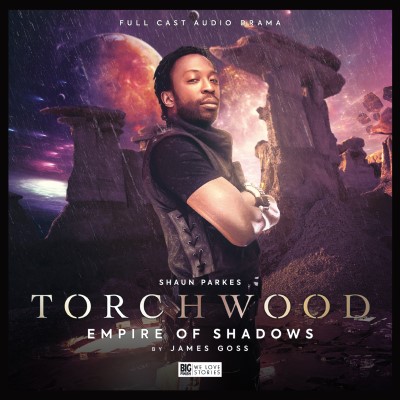 Torchwood: Empire of Shadows is available now, in CD and digital download formats, from the Big Finish site.