In her fourth Big Finish boxset since first appearing in Doctor Who spin-off Vienna: The Memory Box in 2013 (and with the seventh Doctor before that), Chase Masterson’s impossibly glamorous bounty hunter, ex-assassins, investigator Vienna Salvatori is back for Vienna: Retribution. 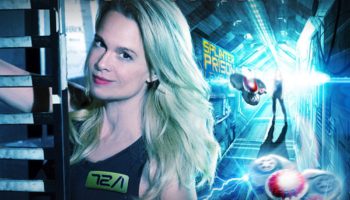 This time the three-story boxset is penned by a single writer, the prolific Guy Adams, and it might just be the best set yet.

Since teaming up with her partner, Jexie Reagan (Samantha Béart who also appears in Torchwood audios), Vienna has moved forward, abandoning her assassin past for (slightly) more acceptable sources of income.

This is going okay, until a woman dies, and Vienna is charged with murder and sent to a maximum-security prison (The Splinter – think Alcatraz on steroids in space). Here she has to rely on her wits, and new friends Mama Val (Annette Badland) and Ratz (Samuel Harris). She has to adapt, survive, investigate just what is at the heart of the conspiracy she believes she has fallen victim to and escape. If she can – escape from The Splinter is [of course!] impossible. It’s a wild landscape of drones, murderers, computers and harsh discipline, with few friends and enemies at every turn.

Vienna: Retribution works by balancing a dark humour with the trappings of space opera, well-drawn characters and a plot retaining just enough of the Philip K Dick flavour of The Memory Box to connect Vienna back to her roots. In some ways this set is the audio equivalent of a classic 2000 AD comic strip, all vivid action, extraordinary characters, rich settings and tucked away those flourishes that lift the work beyond the good into the brilliant.

Scott Handcock’s direction brings all the cast to the fore, and even if the plot focusses on well-created female characters, it avoids just making all the men villains, and has some very well-rounded creations, such as Prosecutor Grover (Edward Harrison). The story also unfolds naturally, moving from part one being mostly told in flashback while the rest of the set is told in normal sequence. While the plot moves forward, there are twists and turns enough to keep the listener gripped.

Any enthusiasts of audio drama who have not yet dipped into the universe of Vienna could do a lot worse than start with Vienna: Retribution. It’s a boxset guaranteed to make new fans.