The much-anticipated futuristic thriller Edge Of Tomorrow, starring Tom Cruise and Emily Blunt, is out in UK cinemas on 30 May and we’ve teamed up with Warner Bros. Pictures and Village Roadshow Pictures to give away exclusive merchandise packs (including a t-shirt, mug, key tag, wallet and more) to five of our Twitter followers! 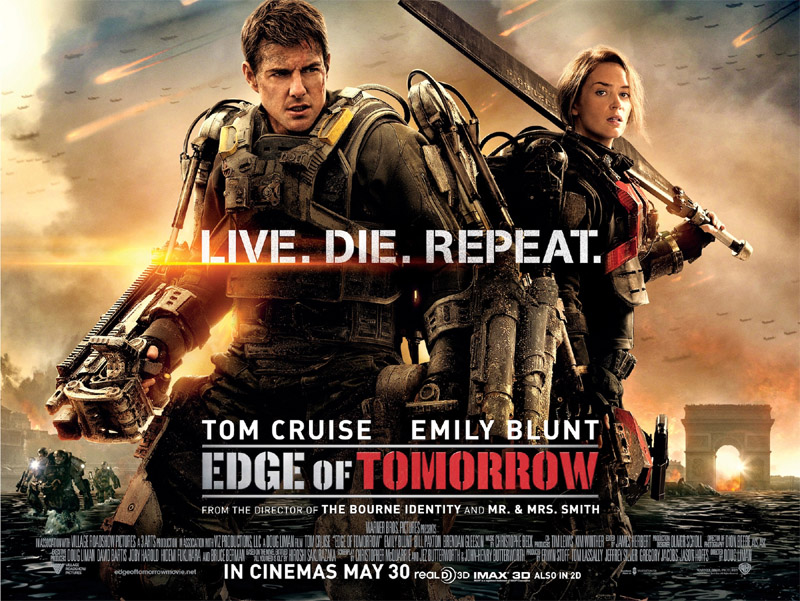 The epic action of Edge of Tomorrow unfolds in a near future in which an alien race has hit the Earth in an unrelenting assault, unbeatable by any military unit in the world.

Major William Cage (Cruise) is an officer who has never seen a day of combat when he is unceremoniously dropped into what amounts to a suicide mission.  Killed within minutes, Cage now finds himself inexplicably thrown into a time loop—forcing him to live out the same brutal combat over and over, fighting and dying again…and again.

But with each battle, Cage becomes able to engage the adversaries with increasing skill, alongside Special Forces warrior Rita Vrataski (Blunt).  And, as Cage and Rita take the fight to the aliens, each repeated encounter gets them one step closer to defeating the enemy.

Edge Of Tomorrow is released in UK cinemas and IMAX on 30 May.

> Find out more about Edge of Tomorrow.

This competition has closed. The winners are Zara Podmore (@podmoreland) from Hattersley, Debbie Mulloy (@HeeDeeHee) from London, Shannen Carrigan (@ShannenCarrigan) from Norfolk, Sabrina Khan (@sabrinakhanuk) from Bury and Simon Grundy (@luckylatic) from Chorley.

Employees and contributors of CultBox.co.uk and their families are not eligible to enter. The judge’s decision is final and no correspondence will be entered into. The prize may not be transferred to any other person. No cash alternative or alternative prize is available on entrant’s request, but in the event of the advertised competition prize being unavailable we reserve the right to offer an alternative prize of equal or greater value. Entry in the competition implies acceptance of these rules. 5 (five) winners will each receive 1 (one) Edge Of Tomorrow merchandise set including:  1 (one) mug, notebook, key tag, hat, iwallet and t shirt.