“The Frontier Awaits” for the crew of Captain Christopher Pike’s USS Enterprise.

Ahead of the show’s launch on May the 5th, streamer Paramount+ have taken to twitter to reveal the credits for Strange New Worlds. Bound to please many a hardcore fan, it not only boasts some frankly gorgeous visuals, but also gives us Anson Mount’s take on that oh-so-famous opening introduction as Captain Christopher Pike:

These are the voyages of the starship Enterprise… Here’s your first look at the opening titles from #StarTrek #StrangeNewWorlds! pic.twitter.com/090MUm2Nbd

As Pike talks about exploring the universe, we begin by exploring the Enterprise herself.  That’s until she boldly goes into a retro, technicolour universe. It’s somewhat reminiscent of the Star Trek: Voyager credits in places, but rendered with today’s graphics; from dust clouds to asteroid fields, there’s no doubt about the show’s stated mission of exploration!

The theme itself is a subversion of the original Star Trek theme, with plenty of strings and a lot more dramatic intensity. We’re sold! 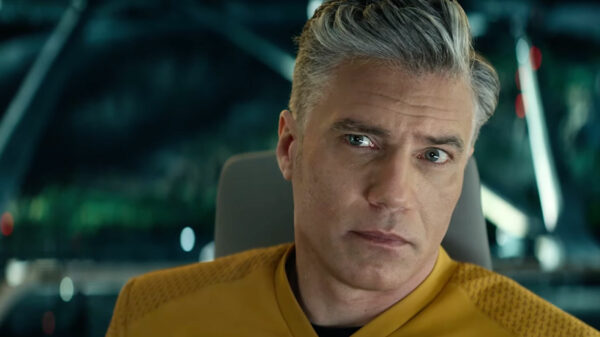 “Perhaps the greatest honor of my career to date was getting to utter these words: “Space, the final frontier…” I could not be more proud to be a part of the @StarTrekOnPPlus team and I could not be more grateful to the Trek community. From the bottom of my heart, THANK YOU.!”

As we said, the show launches on May the 5th via Paramount+. UK fans will have to wait, although the streaming service is expected to launch over here in the summer.

“The Frontier Awaits” for the crew of Captain Christopher Pike’s USS Enterprise.

March brought us a teaser for the new Star Trek show Strange New Worlds, but April has delivered a full blown trailer.

It’s full of action and exploration as Captain Christopher Pike talks of their mission to chart the stars and push the boundaries. It looks like a whole load of fun, and there’s a soupçon of romance thrown in for good measure!

Spinning out of Discovery‘s second season, Strange New Worlds promises adventure as Pike (Anson Mount) captains Starfleet’s most famous ship. Joining him are Rebecca Romjin and Ethan Mount, reprising their roles as Number One and Science Officer Spock. The trio were terrific in that season of Discovery and, frankly, it was a shame to leave them behind when the show jumped to the 32nd century!

The wider crew are a group of new faces, although not all are new names; the characters of Nurse Christine Chapel, Cadet Nyota Uhura and Dr. M’Benga all appeared in the original series, here they’re played by Jess Bush, Celia Rose Gooding and Babs Olusanmokun respectively. Joining them are Melissa Navia as Lt. Erica Ortegas, Bruce Horak as Hemmer and Christina Chong as the tantalisingly named La’an Noonien-Singh.

As well as the trailer, there’s a handsome new poster too featuring the crew with the Enterprise looming behind them. 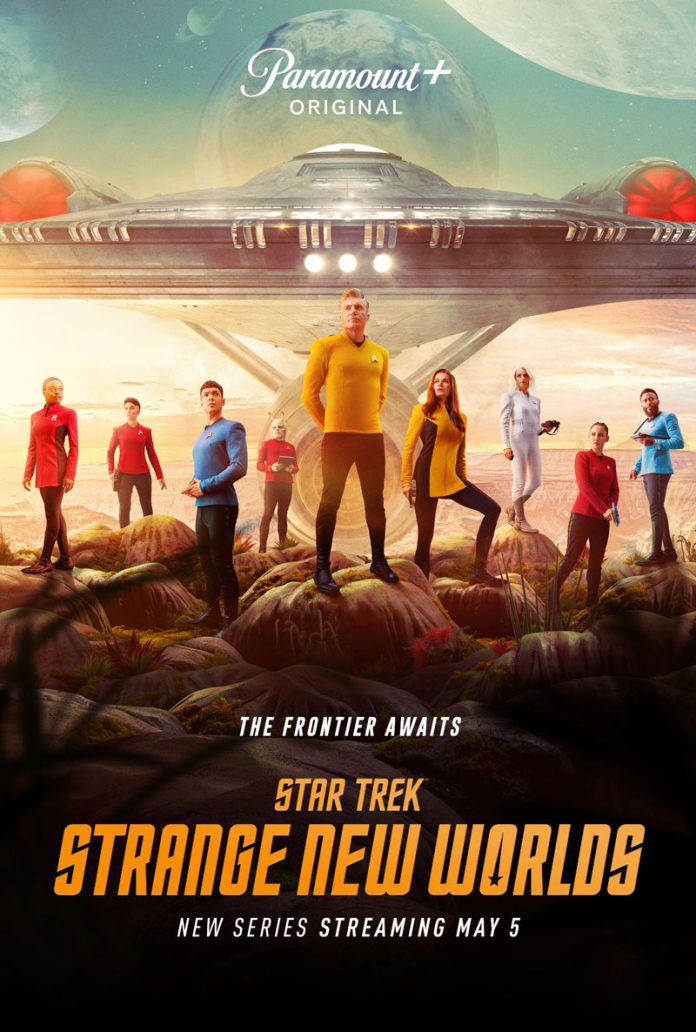 If you want more info, there’s plenty of pictures over at StarTrek.com. Paramount+ clearly have a lot of faith in the show, it’s already scored a recommission – and cast a James T. Kirk too!

Disappointingly, we’re still waiting on the news of how British fans can watch Strange New Worlds. It’s landing on May the 5th in the US, Latin America, Australia and the Nordics on Paramount+, and on Crave in Canada. Sadly we Brits reman in the dark; we’re caught in the nebulous “with additional international availability to be announced at a later date” category.

With Discovery Season 4, UK fans had the options of purchasing the show on streaming or trying to catch a linear broadcast on Pluto TV. Alternatively, we might have to wait for Paramount+ to arrive (it’s coming via Sky sometime in 2022).