Sky have released a trailer for one of their seasonal treats: The Amazing Mr Blunden.

The time-travel story is an adaptation of the 1972 novel The Ghosts by Antonia Barber and was previously made for the big screen, starring Diana Dors. We first reported on the filming way back in June.

This new version, due to air on HBO Max, comes from Mark Gatiss (Sherlock, Dracula), who both writes and directs. 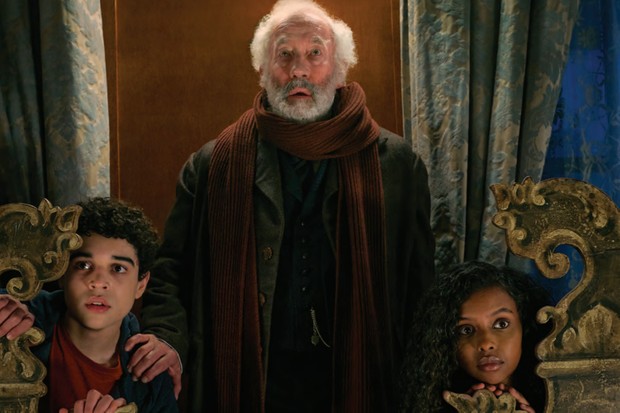 If you’re unfamiliar with the story, here’s the premise:

In the Sky Original, Christmas adventure arrives for London teenagers Jamie and Lucy Allen in the form of a mysterious old man, Mr Blunden, who offers their mum the opportunity to become the caretaker of a ruined country house – one that’s said to be haunted. Within its neglected, overgrown grounds, Jamie and Lucy have an encounter with what appears to be a pair of ghost children.

But these spooky kids, Sara and Georgie, aren’t actually ghosts. They’ve travelled forwards in time to seek help, believing they’re going to be murdered by the wicked Mr and Mrs Wickens. And Lucy and Jamie’s strange visitor seems to be the key to it all. With his help, they must travel back to 1821 to save Sara and Georgie and redeem their remorseful new friend – The Amazing Mr Blunden.

The cast includes a couple of star names, the legendary Simon Callow (who recently popped up in Hawkeye), plays Mr Blunden, while Tamsin Greig (Episodes, Friday Night Dinner) will join Gatiss to create Mr and Mrs Wickens. Both appear in the promotional material looking positively ghastly!

“Is this film made for me?”

Talking about the project, Mark Gatiss reveals how close the story is to his heart:

“Everything about The Amazing Mr Blunden is magical. A ghost story with a sentimental heart. A costume drama with a time-travelling twist. Scary villains, melancholy, laughter and joy. I first came across the wonderful original film at primary school when it was shown on a battered old projector on that most hallowed of occasions – the last Friday before the Christmas holidays. In our new version, as in the book, the Allen family are very much from the modern world. I can’t wait to share the adventure with a whole new audience.

I saw it at school when I was seven, literally on the day we broke up for Christmas. It was like, “is this film made for me? It’s got everything I love!” I’m a slavish devotee of the original, I know every little phrase, I go back to it for solace. So it’s a very personal project.”

The Amazing Mr Blunden is produced by Richelle Wilder and Isibeal Ballance; it’s executive produced by Adorable Media, Can Do Productions, Handmade Films and Jon Mountague for Sky Studios.

Airing on Sky Max at 7pm on Christmas Eve, it’s also being made available to stream on Now.

Definitely one for our Christmas wish list – time to crack out the marker pen and attack the festive Radio Times!