Simon & Schuster UK will publish Christopher Eccleston’s memoir, I Love the Bones of You, charting his acting career plus the impact on him and his family of his late father’s struggle with dementia.

The book will explore Eccleston’s life growing up in working-class Salford, his deep-rooted desire to perform on stage, and what developed into an acting career that has included his film debut in Let Him Have It to the BBC’s landmark drama mini-series Our Friends in the North and the Doctor Who television relaunch.

The name of the book comes from a quote from his father, who was in the early stages of dementia, a “sweet spot” where there was a loss of inhibition sufficient to allow Eccleston’s normally reserved father to be able to demonstrably express love for him.

I Love the Bones of You is due to be published in September 2019. 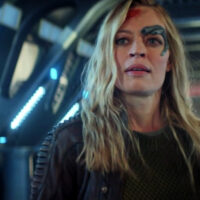 7of9 revelation in the Star Trek: Picard season 2 trailer