The 2014 novel will become a television series, telling the story of a female comic in the 1960s.

Gemma Arterton (Black Narcissus, Quantum of Solace) will star as Barbara Parker, who is described as bold, stylish and courageous and who takes London by storm. The story follows her journey from Blackpool beauty queen to comedy superstar and nation’s sweetheart, amid the male-dominated world of the 1960s sitcom. The novel has been adapted by Morwenna Banks and will be directed by Oliver Parker. 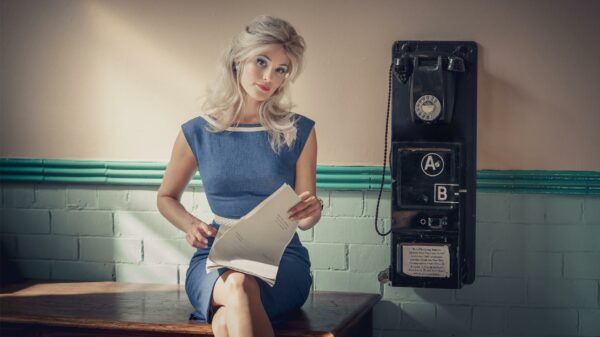 Here’s the blurb: It’s the height of the swinging 60s and Barbara Parker has just been crowned Miss Blackpool – but there’s got to be more to life than being a beauty queen in a seaside town, right? She wants to be… someone. The bright lights of London are calling, and our determined hero sets off to find out who that someone is.

The London she encounters is not as quite as swinging as the one she’d read about and seen on TV. However, after a series of setbacks Barbara finds herself in unfamiliar territory – an audition for a TV comedy show. Barbara’s uncompromising northern wit proves to be the X factor that the show has been missing. She gets the part and becomes part of a ground-breaking new sitcom which will have an impact on British comedy for decades to come.

Being a woman in a largely male environment has its own challenges, but as Barbara ‘finds her funny’ she re-defines the prevailing attitude to funny women and in the process, reinvents herself.

Gemma Arterton said: “It’s a heart-warming story of an ambitious woman with a dream of making people laugh – it’s going to be something special. It’s an honour to be working with such an incredible team and be reunited with my first ever director, Oliver Parker.”

Funny Girl will also star Rupert Everett as Barbara’s agent, David Threlfall as her father and Tom Bateman (Jekyll and Hyde). Also in the cast are Clare-Hope Ashitey (Doctor Who: Can You Hear Me?), Arsher Ali (The Missing), Matthew Beard (Avenue 5), Emily Bevans, Leo Bill and Alexa Davies.

Jon Mountague, Sky Studios’ Director of Comedy, seems pretty pleased with this one saying: “With Morwenna Banks’ brilliant script, this was the perfect opportunity to bring a contemporary take on this inspiring story. Funny, smart and revealing – exactly what a Sky Original comedy should be, and we can’t wait”

The show is produced by Potboiler and Rebel Park Productions, in association with Sky Studios. Executive Produced by Nick Hornby, Gemma Arterton, Morwenna Banks, Andrea Calderwood, Gail Egan, Jessica Parker and Jessica Malik. It will screen on Sky MAX and Now TV in 2022.

The Cultbox Hot Take – We’re instantly thinking this sounds like a thoroughly British take on Amazon’s The Marvelous Mrs Maisel, which is also due in 2022. As ever, we’ll keep you posted.