A Doctor Who film crew filmed a scene at Atlantic College in Llantwit Major, Wales on March 17 in front of an old stone house located on the campus.

The crew filmed a scene with a silver Daimler DS420, a luxury model manufactured by Jaguar in the late 1960s/early 1970s. It is not known if there were any actors filmed with or in the vehicle.

The above are the only two photos that have emerged from the filming but the crew had a wide variety of scenery to choose from on the campus which is located on the seashore and includes St Donat’s Castle. It’s possible that the crew utilized multiple campus locations.

In other Doctor Who filming news, there was some filming inside Cardiff City Hall on March 8. Our source, who took the two photographs below, overheard the crew say that “Mandip and Jacob are here.” 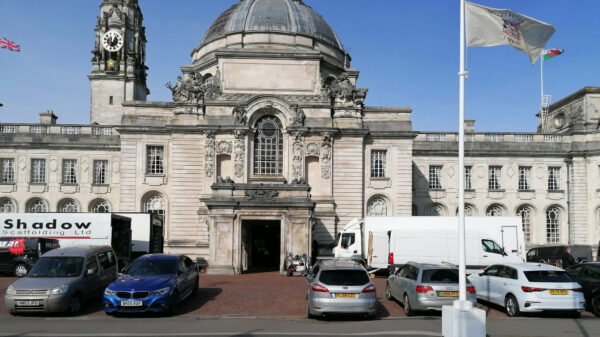 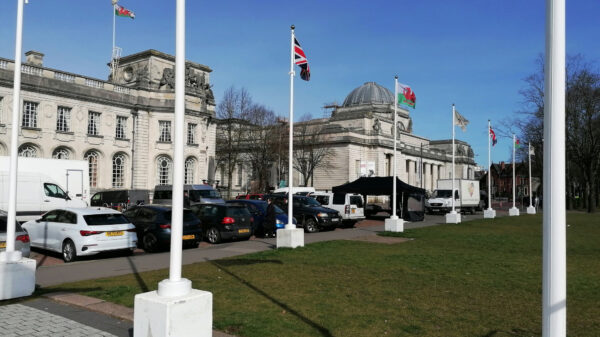 Although our source didn’t snap a photo, they observed Mandip Gill and Game of Thrones actor Jacob Anderson eating lunch together outside the location. Anderson had previously worked with Doctor Who showrunner Chris Chibnall, playing Dean Thomas on Broadchurch.

On March 18, Doctor Who film crews filmed interiors at two separate locations in Cardiff; Kongs Cardiff – a bar with arcade games, and The Hayes.

Filming taking place this afternoon in two locations in Cardiff.