Mark Gatiss spoke to the Oxford Union yesterday and apparently dropped a few exciting tidbits of information on the League of Gentlemen reunion.

The list of people chosen to address the famed Oxford Union is long and auspicious. The latest in that line is none other than actor/writer Mark Gatiss. He sat down in the grand venue yesterday (June 6th) to talk about a wide range of subjects.

In the audience for the event was CultBox writer Tom Marshall, who has chronicled the conversation on his own blog.

Interestingly, among his recollections of the event, is Gatiss’ response to a question about the rumoured League of Gentlemen reunion. Should that come about this year, it would mark 15 years since the show last aired. On the subject, Tom reports that: 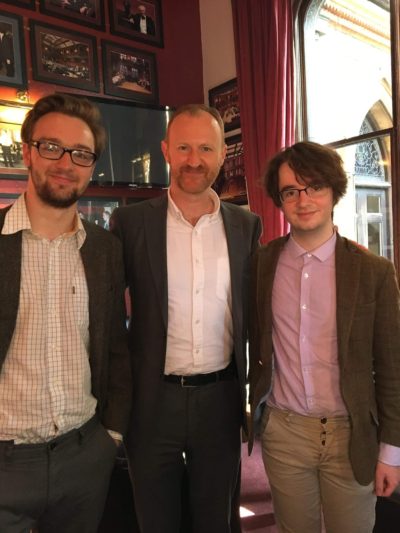 “the League of Gentlemen reunion came up fairly early on, with the interviewer mentioning the mooted air date of 2019 or 2020; Gatiss notes that all he had actually said on the matter was that it would be “an anniversary” and thus they could hold on to the idea until “the fiftieth anniversary”! However, he confirmed that they’ve had several meetings about it, are hoping to shoot this year, and have a number of what he thinks are pretty good ideas.”

So, we may yet get to see something from the show sooner than many expected.

Tom goes on to say that:

“He claims the group never really split up, just went off and did other things, and that they remain very good friends. Almost everything in the show, apparently, is based on real people – stuff that makes the trio laugh; Papa Lazarou, for instance, is based on a childhood anecdote of Reece Shearsmith’s.”

Thanks to Tom for the heads-up on this – you can read his full account of the event here.

Mark Gattis’ new episode of Doctor Who, ‘The Empress of Mars’, is due to air this Saturday, you can read all about that in our Doctor Who series 10 episode guide, here.

Are you excited about a League of Gentleman reunion? Let us know in the comments.