The fifth episode of Doctor Who Series 12, Fugitive of the Judoon contains a touching tribute in the form of a namesake character. The Judoon captain in the episode, Pol-Col-Don is named for a Doctor Who fan and friend of Chris Chibnall, Paul Condon, who died on May 10, 2019.

@CultBoxTV Hi, just on your DrWho judoon story, the Judoon Pol Con Don is named after BBC online producer and DrWho fan Paul Condon who died last year. He was friends with Chris Chibnall when we were in the Merseyside Local Group in the 80s and Chris paid tribute to him in DWM.

Chris Chibnall paid tribute to Condon in his Production Notes of Doctor Who Magazine issue 540:

“I first met Paul Condon, and his lifelong best mate Jim Sangster, in Liverpool, I guess in 1986. We were 16. My abiding memory is of his smile, his sense of fun, warmth, mischief and generosity. Plus of course his love for Doctor Who. He was a shining example of the best in Doctor Who fans: he loved the show with passion, kindness, empathy and celebratory humour. So I was floored to get a text telling me Paul had died suddenly, at 49. So many eulogies have sprung up in the wake of his unexpected death (often accompanied by him cosplaying the Thirteenth Doctor, which I hadn’t seen): nobody had a bad word to say about him. His absence leaves a deep hole in a lot of people’s lives. I’m sending condolences to everyone, inside and outside the Doctor Who family, who knew him. We should all Be More Paul.”

The Doctor joined in the Manchester Pride parade this afternoon!

Paul Condon was a UK convention organizer, a BBC producer and the editor of the book 1001 TV Shows You Must See Before You Die, an authority on UK and US television. He curated online content for BBC television shows, including Doctor Who. He was also a popular DJ at the Gallifrey One convention in Los Angeles. 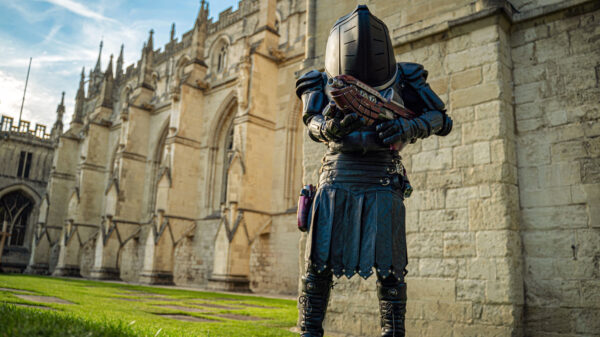 Paul Condon’s touching namesake Pol-Con-Don will stomp the streets of Gloucester in Fugitive of the Judoon on Sunday, January 26, 7:10 p.m. on BBC One and 8:00 p.m. on BBC America.