In an email released from the official Doctor Who newsletter, new details were released about the Dark Times, an ancient time period featured prominently in the Time Lord Victorious adventures. Written from the perspective of a cybernetic entity known as Data Worm back from a mission to the Archive of Islos, the newsletter reveals that time travel back to the Dark Times is impossible.

“There’s a block around [the Dark Times]. Many believe that Rassilon (founder of the Time Lords) put up an impenetrable barrier around them. But why? Was it to stop the time-capable races from travelling back and altering the origins of the universe we now have? Whatever, not even during the Darkest Days of the Time War could anyone manage to go back there.”

The missive warns that any meddling in the events of the Dark Times could have grave consequences to the universe. There is also new information about the Kotturuh, the “Bringers of Death.” The Kotturuh frighten the Eternals so completely that they ran away from them and continue to evade them. The Kotturuh are described in the synopsis for the Time Lord Victorious book The Knight, the Fool and The Dead  by Steve Cole:

Just like everyone else in the universe. The tenth Doctor travels back to the Dark Times, an era where life flourishes and death is barely known… Then come the Kotturuh – creatures who spread through the cosmos dispensing mortality. They judge each and every species and decree its allotted time to live. For the first time, living things know the fear of ending. And they will go to any lengths to escape this grim new spectre, death. 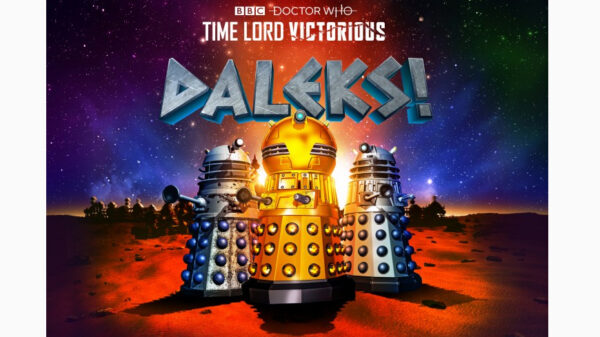 The Archive of Islos, where Data Worm receive the information, is invaded by the Daleks in the animated series Daleks!

The Daleks’ plundering of the Archive of Islos unearths something ancient and deadly. Soon Skaro is under attack and the Dalek Emperor is on the run! Can the Daleks defeat their adversaries and regain their planet, even with help from an old enemy?

More Time Lord Victorious content will be released on September 17 in a Doctor Who Magazine comic supplement featuring the ninth Doctor.

The Ninth Doctor and Rose Tyler are trapped in the Dark Times, facing a terror out of myth! Don’t miss the first chapter of ‘Monstrous Beauty’ by @Scott1Gray, John Ross, James Offredi & @hotelfred! On sale with DWM #556 on 17th September! #TimeLordVictorious pic.twitter.com/sU2iaqYG1D

To receive updates from the official Doctor Who newsletter, sign up here.