From her surprise reappearance in ‘Partners in Crime’ to their dramatic reunion, Doctor Who teased Rose’s return throughout Series 4. The Dimension Cannon box set fills that gap in the Doctor Who canon, following Rose’s quest thought parallel universes to find him.

Returning with Billie Piper are Camille Coduri and Shaun Dingwall, the latter making his audio debut as the alternate-Pete Tyler. Back too is Mark Benton, as another iteration of Clive Finch – the Doctor obsessive who fell victim to the Auton invasion in ‘Rose’. 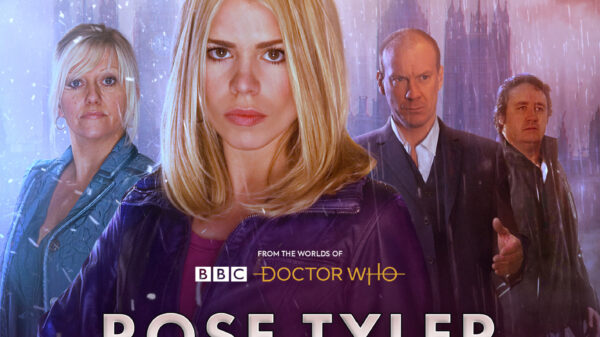 Writer Jonathan Morris sets up the format with the story of the first dimension jump. An exploratory foray, Rose discovers a world with no spaceships, no Harriet Jones and no UNIT. It does however have a Clive and after recruiting him, she sets out to find its Jackie and Pete Tyler.

Focussing on the core cast, this is a fascinating study of the Tyler family – or not in this case. These are different people, who have lived markedly different lives, and when tensions escalate they react in unexpected ways. For his part, Mark Benton is excellent as Clive, a UFO enthusiast thrilled to discover the possibilities of the multiverse.

For the second tale, by Lisa McMullin, Rose travels to another Earth with new recruit Clive. This time, it is a world where climate change has caused it to rain incessantly, for years. In seeking to retard the disaster, much of the modern technological revolution did not happen here or was banned. Free of mobile phones and television, this world is powered by water and wind.

Finding an ally in Rob (Joe Jameson), Rose finds herself drawn into a Downing Street conspiracy. In this universe the Prime Minister is not Harriet Jones, but the steely Margot Kinnear (Julia Hills).

Meanwhile, Clive makes an unexpected romantic connection, bonding over books and conspiracy theories, but the impending disaster looms over their happiness.

In what seems closest to the usual Doctor Who fare, writer AK Benedict creates a world of technology gone mad. In this morbidly obsessed parallel, Pete finds his recently deceased double was a highly successful knight of the realm.

Meeting the grieving Jackie in her high-tech castle home, we enjoyed great character development for Rose and her not-quite Dad. The story considers the implications of these almost familial relationships, created by inter-universe travel. Along with terrific performances from the core cast, there is a great role for Alistair Petrie as the unscrupulous Wallace.

The Last Party on Earth

Jackie Tyler is the last person you might choose for a trip to a parallel universe, but when Rose finds herself back on the Powell Estate, her Mum is the perfect ally. On a doomed Earth, very close to their own, the pair are soon embroiled in the affairs of their former neighbours.

Drawing from RTD’s recent novelisation of ‘Rose’, writer Matt Fitton introduces us to Mook and Patrice. In Rose’s world, the pair were together and in a band with Mickey Smith – but this is a different universe. Odessa Smith is still alive here and never had a son…

Odessa was one of Jackie’s best friends and the scenes between Camille Coduri and Elizabeth Uter are touching, sad and utterly life-affirming too. Full of wit and humour, this fourth tale delivers a love story for the end of the world – and manages a Sliding Doors gag too!

Famously, after writing her original departure in ‘Doomsday’, RTD devised a spin-off for Billie Piper. Set in the alternate universe, Rose would have been gainfully employed defending the Earth. While it remains unproduced, the idea played a part in the genesis of this project and the development journey is well-covered in the Extras.

The Dimension Cannon feels unusual for Doctor Who universe, with the sci-fi dialled down in favour of character-based drama. In many ways, the concept has more in common with early episodes of the late 90s American series Sliders. These stories are a testament to the enduring strength of what RTD and his team created in 2005, the superb casting, and the confidence Big Finish have in creating compelling, thought-provoking drama.

Each of these stories is about the end of the world, in one form or another, but director Helen Goldwyn keeps the tone varied and thankfully not too dark. Composer Joe Kraemer aids this task with a gorgeous score – his theme evokes a magical, Harry Potter vibe and is threaded throughout in different forms. Given the strength of this box set, we could certainly stand another few trips!

‘Rose Tyler: The Dimension Cannon’ is available now on CD and download from BigFinish.com