The Lone Centurion Volume 2: Camelot continues the adventures of Rory Williams, who has taken it upon himself to guard his wife inside the Pandorica.

Doctor Who’s Series 5 finale saw Amy Pond’s luckless (and deceased) fiancé restored to life as an Auton Roman Centurion. Unable to resist his programming, he shot her and placed her in the Pandorica; built to ensnare the Doctor, it instead saved her life.

This Rory focused spin-off takes place in the twisted Earth of an alternate timeline where he protected the Pandorica through the centuries. Of course, those events were all subsequently erased when the Doctor rebooted the universe. Does that all truly matter? Possibly not, but it’s a terrific excuse to put Rory in outlandish situations and have lots of fun.

The first boxset of The Lone Centurion found Rory rising from a mere gladiator to the Emperor of Rome. For Volume Two, he’s arrived in the court of King Arthur. 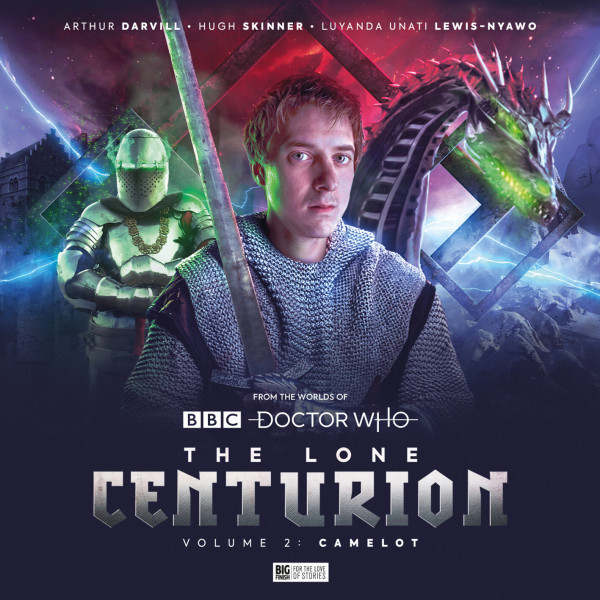 The Once and Future Nurse

Arriving in Camelot, Rory makes himself useful as an assistant to the court physician (having stashed the Pandorica safely). He’s keen to use his knowledge, while Malthus (Barnaby Edwards) clings to primitive practices, involving poultices and the removal of limbs.

Alife Shaw’s story introduces us to a surprising version of Camelot. King Arthur (Sam Stafford) is a fool, with Queen Guinevere (Luyanda Unati Lewis-Nyawo) the true power behind the throne. Plus there’s the sinister figure of Merlin (Richard Clifford — no Doctor he), who wields influence by blaming everything on the wicked sorceress Le Fay. The wizard is also on the hunt for the Pandorica and its legendary guardian.

As one might expect, Camelot has a love triangle at its heart. On this occasion however, it involves Guinevere, Lancelot (Hugh Skinner) and Rory — the latter of whom remains hilariously oblivious to courtly advances – and it provides plenty of mirth. Naturally, despite his best efforts, Rory can’t help but fail upwards at the story’s conclusion…

The arrival of a phosphorus covered warrior sees the newly dubbed Sir Rory reluctantly despatched on a knightly quest. With an enthusiastic Lancelot at his side chronicling, he rides to the aid of a decidedly ungrateful damsel in distress. From there it is on to her home, taken over by glowing knights, assisted by tuneless wandering minstrel.

Tim Foley’s story is a glorious romp, as Rory turns detective (CSI Camelot!) to overcome a series of puzzles. Rosie Baker shines as the withering Lady Lynn, who’s unimpressed with the quality of her rescuers (we felt shades of an early Princess Leia). Harley Viveash entertains as Beau too, the irritating bard and we loved how he squabbled with Lancelot.

The Last King of Camelot

Realising their quest was a diversion, Rory and Lancelot return to find Camelot at war; Merlin has staged a coup and King Arthur has fled.

In Kate Thorman’s finale, Rory reluctantly finds himself cast in the role of a military leader as they try to take the castle back. There’s plenty of fun had at Rory’s expense — he’s no Knight — and yet he manages to marshal the troops when Arthur is indisposed and finds a way to lead, empowering those around him. All of which leads to a final confrontation with Merlin…

While a certain element of this tale was left open, we were surprised that the story of the Court Physician did not get a conclusion — just a passing reference. We had hoped for a more satisfactory resolution for Rory and his modern medical methods.

As with the first volume, Camelot is a lot of fun. Arthur Darvill again gives an engaging central performance and we enjoyed the double-act with Hugh Skinner’s Lancelot which runs through all three tales. For her part, Luyanda Unati Lewis-Nyawo impresses as the grown-up at the heart of Camelot, albeit restricted by her position as consort to the foolish Arthur.

This set benefited from the location shift from Rome to Camelot (apparently in Wales despite none of the principals sounding Welsh) and unlocked a new set of toys to play with. The gags reference Monty Python, Merlin and doubtless more besides.

However, can this format sustain further adventures? We’re not sure. A third volume would need to do something markedly different to avoid repetition. Perhaps it could lean into what is different about this twisted, starless timeline?

The Lone Centurion Volume 2: Camelot is available on CD and download from Big Finish.