For those with only a distant memory of Series 5, Amy Pond’s luckless fiancé had a habit of dying. And being brought back to life. During the two-part series finale, Rory was somehow resurrected as an Auton Roman soldier. After shooting Amy (as per his programming), he stood guard over her inside the Pandorica for two millennia. That’s the alternate timeline where these stories take place… 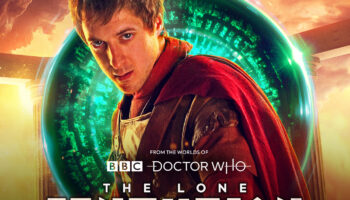 Captured along with the Pandorica and taken to Rome, Gladiator sees Rory fighting for his life, albeit reluctantly. As an Auton duplicate he is remarkably difficult to kill! His impervious status is soon spotted by Emperor’s devious wife Augusta (Joanna van Kampen). Installed as the Emperor’s personal bodyguard, he finds plots and threats all around.

David Llewellyn’s tale establishes the reluctant Rory as a fish out of water in Roman society. When an attempt is made on the Emperor’s life, he turns detective to save an innocent taking the blame. Among the guest cast, there is a lovely performance from Ines de Clercq as Marcella, as well as an appropriately over-the-top turn by Joseph Tweedale as Caesar.

Sarah Ward’s The Unwilling Assassin sees Rory promoted to an uncomfortable position. Naturally, he works terribly hard not to kill anyone, concealing his actions and endeavouring to surreptitiously save his ‘victims’. Not that any of them seem terribly cooperative or grateful for his help!

Having made a cameo in Gladiator, the seer Tacitus comes to the fore when his predictions fall out of favour; Terry Molloy gives a hilarious, fussy performance (with shades of The Scarifyers’ Professor Dunning). Joanna van Kampen is great fun throughout as the increasingly paranoid Augusta, while Robyn Holdaway entertains as her suspicious spymaster. We also loved the running gag about Rory’s new job title and how difficult it was to say.

Finally, failing upwards magnificently, Rory finds himself the new Emperor of Rome. Hemmed in by his new status and duties, he chafes against the constant attention. He forms an alliance with his domestic slave Anna (Samantha Béart), who sees his kindness and tells him the truth.

Jacqueline Rayner’s I, Rorius kept us laughing throughout. We particularly loved Rory’s shine to the goddess Amelia and the increasing number of sacrifices dwelling within it. Ironically, Rory’s quite good at being Emperor, if a little out of step with the attitudes of the day.

While set in the Doctor Who universe, these stories eschew alien encounters. If they were not taking place in in a temporal cul-de-sac, we suppose they could be called pure-historicals; they certainly have plenty in common with the First Doctor’s visit to Rome! Indeed, they are more overtly comic than anything else Big Finish has produced. Rory is the gladiator who does not want to fight, the assassin who avoids killing and, eventually, the benevolent Emperor who doesn’t want the job. These tales are full of heart too: Rory’s kindness and empathy shines through and his intelligence (mostly) saves the day. As well as his medical expertise on occasion too.

Arthur Darvill was always capable of more than the television show gave him to do; cast in the everyman role, Rory was often the comic relief. Here, as leading man, he gets to be funny but is rarely the butt of the joke.

The Lone Centurion Volume 1 is a lot of fun –  possibly not everyone’s cup of tea, but certainly doing something no other Doctor Who spin-off does. It is also great to hear BF produce full-cast dramas in the Matt Smith era, where they have so far been restricted to Short Trips and Chronicles.

To save the jokes wearing thin, Volume 2 promises a shift in location; scheduled for July 2022, we look forward to Arthurian antics in Camelot!

The Lone Centurion Volume 1 is available on download and CD from Big Finish.