As regular readers may be aware, Tom Baker, the popular television actor has died and been reincarnated as a giant moggy, the self-styled King of Cats.

Aided by his perky former co-star Suzy Goshawk (Katy Manning), and acidic housekeeper Mrs Frimbley (Susan Jameson), he resides at Baker’s End in the village of Happenstance where all manner of spooky goings on are commonplace – not least Tom helping himself to the gravestones at night in order to construct a book tower with his goblin chums.

While Baker’s End might be Tom’s home, events this time concern the history of Gobbleknoll Hall, a local haunted house which has attracted the attentions of the low budget psychic investigation show “Manifest Yourself” – and they have chosen to film at Beltane which perturbs Tom greatly.

Presented by the no nonsense Marcella Doody, with her temperamental medium Brian, the television crew get more they bargained with they make contact with two visitors from the other side – one an ineffable and unintelligible Sinister Presence and the other a 70’s Glam Rock icon, the Bowie inspired Vince Cosmos.

It is Katy Manning again who, as Suzy, provides the voice of sanity amid Baker’s madness and the sinister shenanigans while guest star Diane Morgan (best known for her turn as Philomena Cunk on Charlie Brooker’s Weekly Wipe) is sublime in her role as Marcella; playing it utterly straight as she delivers priceless gems about possession and the odd double entendre guaranteed to make you spit your coffee. 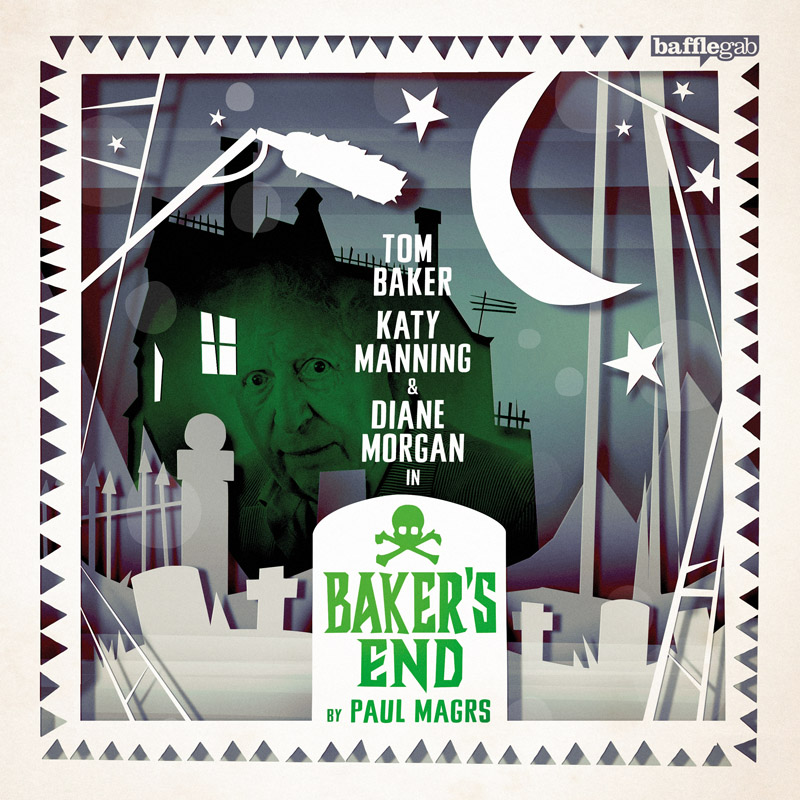 For his part, Stephen Critchlow is delightful as the weedy medium Brian, who has to fend of the attentions of ardent fan Mrs Frimbley, and deal with his capricious spirit guide.

If Tom was turned up to eleven last time, he maintains that level of enthusiasm here, broadcasting his barely restrained lunacy directly into your brain, with an occasional troubling of the forth (audio) wall amping up the effect. As well as the hi-jinks, there are some deeper moments too though, such as when he stumbles upon a phantom party going on in the basement with a host of former television stars.

From fudgenocking snolly-gusters, to whifling and monkey-shafting, the varied and creative use of language continues apace, with Paul Margs seemingly well on the way to creating his own Baker-ish subset of English. “Manifest Yourself” of course, is a perfect skewering of a certain sort of television show, but it is done with an affectionate spirit (no pun intended) and the gags, some quite cheeky, come thick and fast.

It manages to be hilarious and heart-warming, as well as manic and melancholy too and if you enjoyed ‘The King of Cats’, which has just been shortlisted for a BBC Audio Drama Award, ‘Gobbleknoll Hall’ is surely a must have.

Released on CD and download on 2 December 2016 at bafflegab.co.uk by Bafflegab Productions.