Instead, it is styled as “Doctor Vs Master” with the rival Time Lords clashing across the history of humanity’s war with The Eminence.

The Master in question is Big Finish’s terrific home-grown incarnation, played to perfection by Alex MacQueen, who is both charming and persuasive, while maintaining a dark and supercilious air.

Picking up the threads of ‘Dark Eyes 2’, ‘The Death of Hope’ places the Doctor very much in the background. With the Master gone rogue, abducting Molly O’Sullivan for his own ends, he is recruited by the Time Lord Narvin to intervene.

Viewed through the Matrix, we see the Master’s efforts to use a group of survivors in ghastly field experiment, infusing them with Molly’s retrogenitor particles. The tale acts as a handy reminder of The Eminence’s modus-operandi, breathing its gaseous essence into humans and converting them into fearsome calcified Infinite Warriors.

‘The Reviled’ takes place on a colony planet where the humans are quarantined at the pincers of the formerly oppressed locals, while the Doctor battles with the Master’s henchwoman Sally Armstrong for their fate. Then in ‘Masterplan’ he is driven toward more drastic action, attempting to avert the creation of The Eminence in the first place.

Finally, ‘Rule of the Eminence’ sees the fruition of the Master’s scheme. With humanity’s forces returning victorious from the war, he is free to dominate the planet by using Eminence gas, and Molly O’Sullivan, and to reveal his stupendously ambitious plan for universal domination. 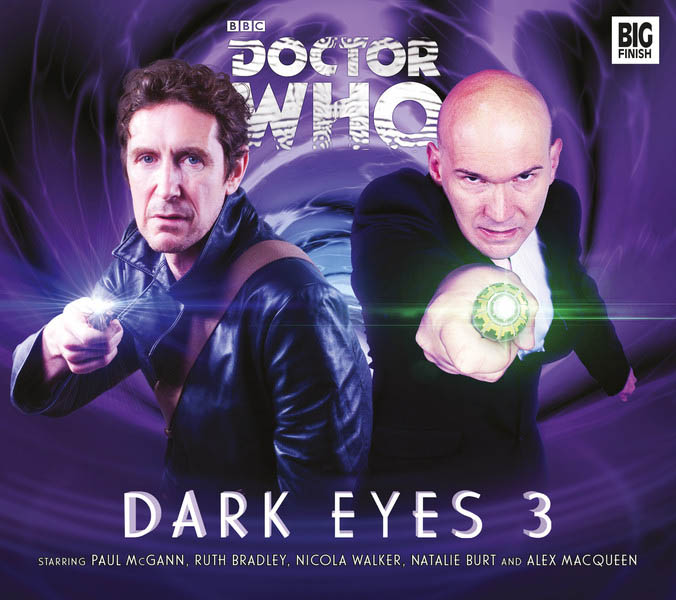 Broader in scope than the previous sets, and perhaps a little more brutal in tone, writer Matt Fitton has delivered some ambitious tales. Paul McGann is matched pound for pound by Alex MacQueen throughout, the two eminently believable as old rivals who know how to push each other’s buttons, and the head to head scenes in ‘Masterplan’ are tremendous.

With Ruth Bradley’s Molly effectively side-lined, the result of a scheduling clash, it falls to the world weary Liv Chenka (Spooks star Nicola Walker) to pick up the mantle of companion. This she does admirably as the carer who bares her own tragic secret.

There are a strong roster of guest stars, notably Sacha Dawan (In the Club, Line of Duty) who takes dual roles as a desperate colonist and an alien leader, and Georgia Moffett (‘The Doctor’s Daughter’).

Comprising four very contrasting stories, this latest Dark Eyes set impresses both on its own and as a continuation of the saga, set to conclude in the next release, due in March 2015.

Extras: A disc of interviews with cast and crew, including chat with Georgia Moffet on her production role for ’The Five(ish) Doctors Reboot’. Additionally, there are some touching reflections on the about Paul Spragg, the Big Finish staffer who died just prior to the recording of these stories.