Travelling alone on Nixyce VII, a planet struggling under the yoke of Dalek occupation, we find the Doctor seeking to aid resistance fighters. ‘The Traitor’ reintroduces us to Liv Chenka (Spooks star Nicola Walker) who first encountered his Seventh incarnation, and contains an interesting debate about collaboration with the Daleks manipulating Chenka’s public image as she attempts to do good. After some solid action surrounding slaves, mining and Robomen, the resolution offers a crippling dilemma and its consequences ripple through the other stories.

‘The White Room’ reunites the Doctor and Molly O’Sullivan, finding her working as a nurse, aiding fugitives and occupying his Baker Street house at the end of WWI. The rounding up of deserters leads to the discovery of some nasty experimentation and a temporally active virus which grants a young lad frightening powers over life and death.

‘Time’s Horizon’ returns us to the far future with Liv Chenka now serving as Med-Tech on the Orpheus, a long range, one way exploration vessel. Its crew wake to find a dead body on board and discover a mysterious energy field, containing a malevolent life force called The Eminence. As well as revealing agendas amongst the crew, the Doctor’s arrival causes tensions with Liv as we realise they have met out of sequence and she has no love for his actions on Nixyce VII. 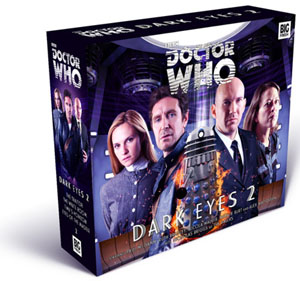 Finally, ‘Eyes of the Master’ brings us back to 1970s London for a showdown with the Master (Alex Macqueen). Posing as a Harley Street doctor, he is intent on creating a weapon to use against the Daleks and this involves the use of Molly’s unique dark eyes. There is also a lovely part as one of the Master’s patients for Jacqueline King, who played Donna Noble’s mother on screen.

With a healthy dollop of ambition, ‘Dark Eyes 2’ broadens the scope of the original and draws on other areas of the Big Finish canon. Alex Macqueen’s Master, first heard in ‘UNIT: Dominion’, is a hilarious creation that fronts his malicious actions with a deadly charm and some uproarious puns.

The addition of audio enemies the Viyrans and the Eminence provides additional threat and provides a welcome edge of uncertainty as the Doctor finds himself stuck in-between Time Lord strategy and the malevolent Dalek war machine.

Whereas director Nicholas Briggs penned the first set solo, writing duties are shared here between Briggs, Alan Barnes and Matt Fitton. Their input and a broadened scope provides some clever plotting and a few genuine surprises, as well opening doors for the further two sequels that have already been commissioned.

As a companion, Ruth Bradley’s Molly remains refreshingly frank and unimpressed by the Doctor. Liv Chenka’s world-weariness acts as an interesting counterpoint, as well as bringing the added dimension of foreknowledge of our hero’s actions.

Paul McGann is, as ever, magnetic in the role, ably demonstrating that although we may have seen his end on screen, the Eighth Doctor still has plenty of life left in him.

Extras: Included in the set is a fifth disc, which contains interviews with the cast and crew, as well as a 13 minutes music suite.