Each of the Doctors each received an outing with 2013’s 50th Anniversary collection of Doctor Who reprints, so this year it is the turn of his foes.

Casting the net wider than before, this collection holds examples from both the Virgin Publishing’s ‘New Adventures’ and ‘Missing Adventures’ ranges from the early 1990s, as well as the BBC Books back catalogue. This makes for some variation in tone, with the newer books seemingly aimed at a slightly younger audience rather than the older fan reader.

As well as a fresh introduction by the author, each monster has been granted a striking close-up cover image, depicting them in their most recent television form. While a logical marketing move, we expect it may furrow the brow of many a hardcore fan who will stubbornly envisage traditional Silurians as they read.

‘Prisoner of the Daleks’ by Trevor Baxendale

Skipping a time track to encounter his most deadly enemies before the Time War, a solo Tenth Doctor finds himself falling in with some human bounty hunters. This space hopping adventure pits the Time Lord against the machinations of the fearsome Dalek Inquisitor General, Dalek X.

‘Touched by an Angel’ by Jonathan Morris

Widower Mark Whitaker is granted a chance to save his wife when transported back in time by the Weeping Angels. Fearing their motives, the Doctor, Amy and Rory chase through Mark’s life to prevent a paradox that will endanger all of history in this smart, funny and heart-breaking tale.

The Seventh Doctor and Ace team up with a displaced American gumshoe in the London Blitz. With Cybermen dressed as gangsters and dubious goings on in the sewers, they encounter explosions and intrigue as they combat the Cyber threat, as well as the ambitions of both the British army and the Nazis.

Representing the Sontarans, ‘Shakedown’ is the adaptation of a 1994 video spin-off, with a framing device added to involve the Doctor. Dicks weaves in the Time Lord as well as companions Chris and Roz, and Bernice Summerfield, providing deeper motivations for both the fugitive Rutan and the attacking Sontarans as ever locked in their brutal conflict. 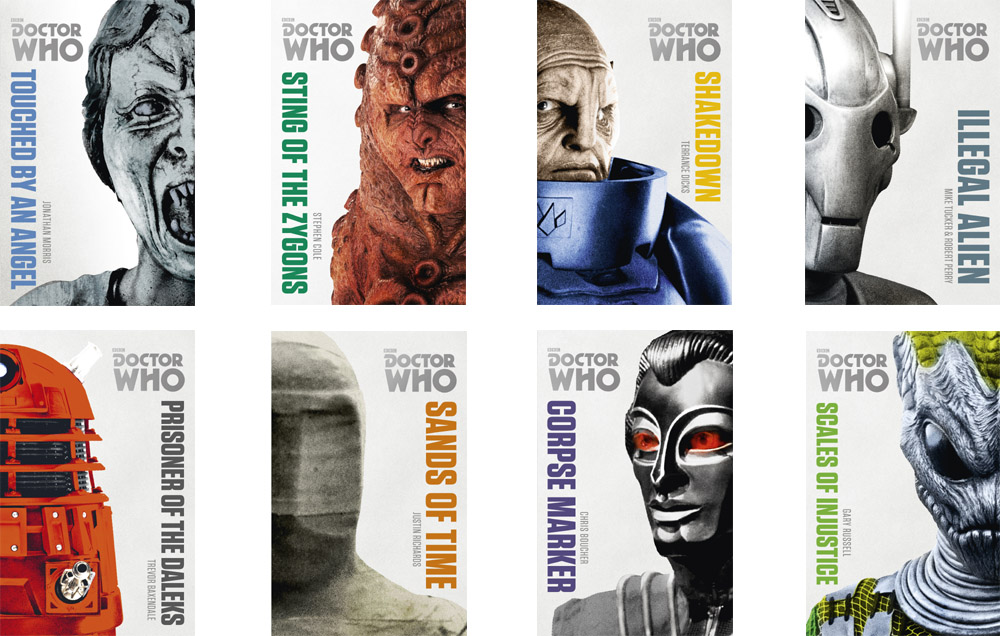 ‘The Scales of Injustice’ by Gary Russell

This sprawling UNIT epic, set at the end of Season Seven, pits the Doctor against Silurians, Sea Devils and sinister forces. Serving also as an exit story for companion Liz Shaw, the story is perhaps a little over-stuffed with references to and cameos from the Earth-bound Pertwee era, but is great fun nonetheless.

‘Sting of the Zygons’ by Stephen Cole

Riffing on the classic ‘Terror of the Zygons’, and in a pre-‘Day of the Doctor’ story, Ten and Martha encounter the shape changers in the early 1900s. Steve Cole provides a rip-roaring tale of double identities that does much to redeem the Skarasen monster, fearsome in concept but much less impressive on screen.

Returning to the colourful world of ‘The Robots of Death’, Chris Boucher expands on his original television story as The Doctor and Leela catch up with the surviving Sand Miner crew when the murders begin again. Political intrigues and conspiracies abound in a tale which spawned its own series ‘Kaldor City’ spin-off audio drama too.

‘The Sands of Time’ by Justin Richards

After Nyssa is kidnapped at the British Museum, the Fifth Doctor and Tegan find themselves ensnared in a puzzle stretching from ancient Egypt to the present day. With events complementing ‘The Pyramids of Mars’, there are robotic Mummies, desert expeditions and ancient gods as the Doctor battles to unlock the mystery and save his companion.

These reprints are a varied bunch, but they do well to demonstrate the range of original Doctor Who fiction over the years and are all entertaining in their own right. If forced to choose a favourite we would plump for either ‘Touched by an Angel’, which seems to perfectly nail the tone of the modern show, or ‘Corpse Marker’ for its expansion on the classic Tom Baker tale.

Published in March 2014 by BBC Books.

What did you think of the stories? Let us know below…