Unexpected that is unless you spotted Alex Kingston reprising the part of River Song on the cover!

Unlike previous Big Finish series such as Dark Eyes, this is a series fully aware it will run over four box sets to a total of 16 episodes. This means a certain pacing and the ability to take time allowing ideas to grow. So far the box sets are self-contained, you don’t have to have heard the first to enjoy Doom Coalition 2, but most fans probably will buy them both.

As to the four stories themselves. Nick Briggs (Executive Producer) starts the set with ‘Beachhead’, and this takes an unexpected direction. In some senses this story adds little to the set, but on reflection allows the character to draw breath and set out a direction of travel.

The story is set as a sequel to a non-existent third Doctor and Liz Shaw story, and has much of the feel of a story from that era of the show. The Doctor is becoming strangely absent, distracted by a telepathic influence. This lets Liv and Helen take on the mentor / apprentice roles, and both characters develop over the set.

John Dorney is next with ‘Scenes from Her Life’, a story that paints the backstory of Time Lord Caleera (Emma Cunniffe who appeared in the eleventh Doctor TV episode ‘Night Terrors’), and lets Helen make a decision that will have enormous consequences.

All this in a strange city like location in the vortex itself, populated by the mad and the desperate. A very dark story with Liv and Helen centre stage, and if Nick Briggs’s story was early 1970s, this is very much 1980s. 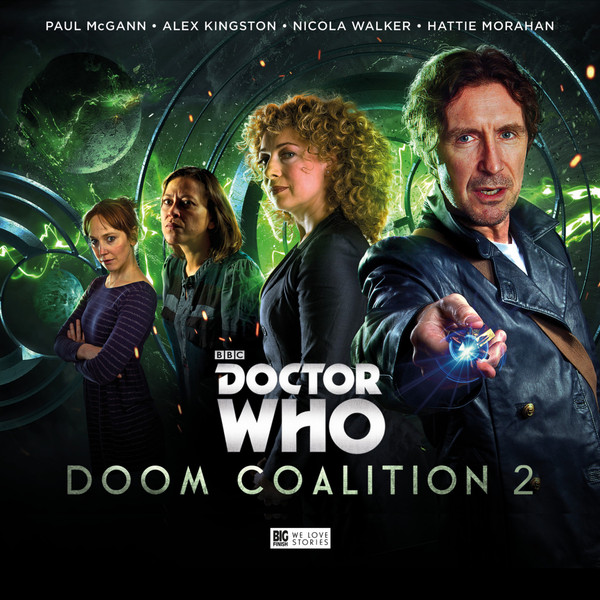 Marc Platt takes the action to San Francisco 1906 with ‘The Gift’. As the Doctor notes, this is where he first appeared in the 1996 TV Movie; how ironic it would be to die there nearly 100 years earlier.

Of all the stories, this is the one that makes the most of the secondary characters as a psychic gift hops from person to person, each time revealing a little more of the bigger story before the Doctor himself has to face up to a power great enough to destroy him and the planet.

Matt Fitton brings the set to a conclusion in The Sonomancer. Not only does the foe from Doom Coalition 1 return in the form of the Eleven (Mark Bonnar, Duncan Hunter in Shetland) but we get River Song.

Of course, River can’t meet this Doctor yet has to help. What we have is a tautly produced tale in which Liv Chenka becomes a Sigourney Weaver-style hero as the Doctor resolves his problems and Helen works to her strengths as River Song dances along the edge of the plot. In many ways this is a toned down River Song and while less intense is perhaps more compelling.

Overall this is an enjoyable set of stories, it moves the overall arc along, develops the characters and lets the villain appear on stage without distracting from a growing sense of much more to come. In places it leaves a lot of secondary stories unexplored, but ignoring that this is a great piece of entertainment.

Released in February 2016 by Big Finish.