Surprised at his arrival on the planet of Docwra, the Doctor senses the unseen hands of the Time Lords once again. While he rails against being used as a puppet for their interventions, Leela, his warrior-savage companion, questions how this is any different from normal as to her mind he is always meddling! 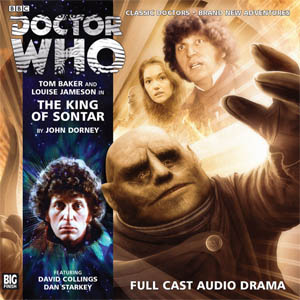 Strang commands a bunch of mercenaries who corral a slave population to work. As some break free, the Doctor is captured and Leela finds herself the uneasy ally of an armourless Sontaran called Vilhol, who has earned the nickname of ‘The Coward’. He remains as the last of Strang’s original troopers, being the only one prepared to beg for his life in order to avoid the inglorious fate of execution.

The captured Doctor attempts to disable Strang, but soon discovers that the General does not suffer from the clone race’s regular weaknesses. The Time Lord’s value is appreciated though and he is tasked to assist the naive scientist Roasto, the wonderful David Collings, who explains why Strang and the planet of Docwra are quite so unique. Rosato’s breakthrough is tremendous but the Doctor questions its moral cost.

Strang is voiced by Dan Starkey, best known as the Eleventh Doctor’s sometime ally Strax, but as befits the General, he is vocally quite different. Big Finish regular John Banks provides the rasping voice of Vilhol.

Leela and the Sontarans are an obvious fit and it is a shame that the television series did not explore the similarities, as she did not encounter them until late into her final story. Writer John Dorney makes good use of Leela’s warrior instincts here and she becomes an inspiration to Vilhol despite her status as one of the “lesser gender of a lesser species”.

With Tom Baker on great form, plenty of humour peppers the action. Our particular highlight is a gag about Sontaran dress-down Fridays. On a more serious note, the story also addresses the Doctor’s continued education of Leela. It is clear that the savage has grown under his tutelage and her actions make for a surprising conclusion to the tale.

The story ends with just under ten minutes of behind-the-scenes extras, comprising a few brief interviews from Baker, Jameson and the guest cast, as well as the writer.