Answering a distress call, the pair arrive on Triketha to find a nascent research colony under attack by giant insects. The wasp-like creatures have been stinging the humans, rendering them comatose – only for the victims to recover, apparently unharmed, after a few days. When the colonists mistake the time travellers for members of a rescue party, they soon become embroiled in the struggle; the insects appear to communicate by telepathic projection and the Doctor discovers he can communicate with their hive mind. 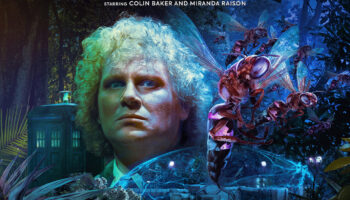 So far, so Doctor Who, but the story tackles another issue too: The Doctor has been to Triketha before. Five years earlier he appeared, fixed an ailing generator and then took a young man off travelling with him. What’s worse, he claims to have no clear memory of the visit!

Writer Roland Moore explores the role of the Doctor’s companion and the effect on those left behind. With his itinerant lifestyle, he rarely faces the consequences of his actions and slips away before questions are asked. While in the service of the greater good, he also makes promises, confident in his ability to save the day. Here, he is forced to acknowledge his fallibility. The Doctor also lies blithely, routinely assuming the identities of examiners, delegates and the like so he can render aid. This time, one such lie of omission finds his trustworthiness questioned at a crucial moment when lives are at stake.

All this sits within an excellent base-under-siege tale, with a wonderfully macabre idea. One with an impressive body count too. While not Doctor Who‘s first giant insects, and arguably just following their own life cycle, these ones are memorably vicious. Sound designer Steve Foxon supports the body horror theme with some vivid sound design too.

Colin Baker gives a terrific performance throughout. As with Plight of the Pimpernel, it is great to hear his Doctor again pushed into more emotional territory. Miranda Raison’s Constance remains gloriously unflappable; despite mixing with scientists, we loved her line about having encountered giant cockroaches and feeling she can bring some experience to bear. With no mention of Flip and Mr Clarke’s fate still unresolved, this is set early in her TARDIS travels.

Director John Ainsworth marshals a strong guest cast. Our standout is Misha Malcolm in the dual roles of Solana and the voice of the insects; an ambitious young woman, we found Solana’s unsubtle wanderlust both engaging and hilarious. The familial relationship between Leighton Pugh and Andrew James Spooner characters is subtly played too.

Colony of Fear is a thumping good action adventure tale, with a temporal dimension that sees the Doctor confronted by ramifications of his actions. Though not essential to the plot, there is a nod to the Series 6b theory and a coda which perhaps foreshadows the memory expanding revelation of The Timeless Children too. As the Monthly Adventures range draws to a close, in favour of boxsets, this is a highly impressive production.

We are also pleased to see that a boxset for the Sixth Doctor and Constance has already been announced; September’s The Eleven will see the pair up against Mark Bonnar’s frenetic Time Lord villain.

Doctor Who – Colony of Fear is available on download from Big Finish.