In series 8 of her Diary, River Song (Alex Kingston) was in the company of robots, now, in The Diary of River Song series 9 New Recruit, she’s back in more familiar (to fans) territory — the era of the third Doctor

Big Finish may reasonably be accused of overusing the motif of River back in the life of a previous incarnation, but this time it feels far less shoehorned in. When we first meet her, the Doctor has been called off at short notice and recommended one Doctor Song take over as an advisor with Liz Shaw (Daisy Ashford in the role her mother originally played). It’s a far more successful UNIT adventure for River than we’ve had before and a chance to hear Jon Culshaw’s impressive Lethbridge-Stewart. 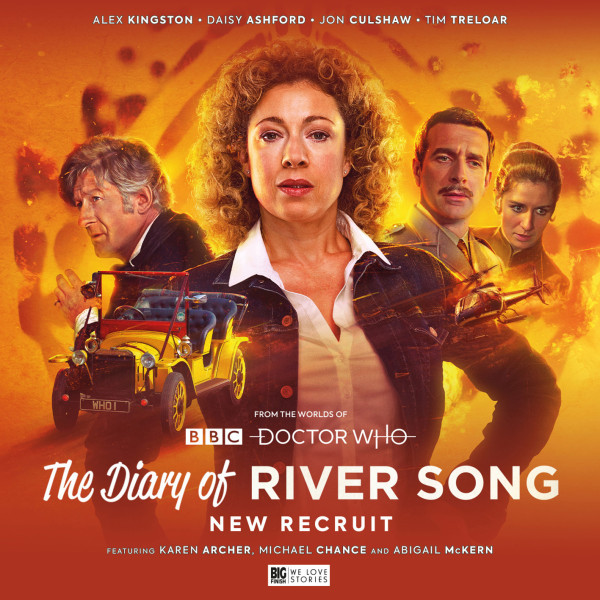 It all starts in the Lizbeth Myles story The Blood Woods, with the expected suspicions from Liz at having someone foisted upon here, particularly one so blasé about alien tech and time travel as River. There’s one problem with using a character as well-drawn as River in a single-disc story — by the time she has been introduced and reminded us just how much larger than life she is, the rest of the tale can get squeezed. It’s a shame as there’s a good story here of rural suspicion of outsiders, the Brigadier not being seen as a chauvinist and an interesting alien threat.

Of course it all ends with a growing bond of friendship between River and Liz.

In James Kettle’s Terror of the Suburbs, Liz Shaw has stopped going to work, as have all the successful, talented women where she lives. The reason? Too many fondue parties and afternoon get togethers. In a tale with a hint of Stepford Wives and even a touch of Abigail’s Party, we get a classic community tale when River arrives and tries to convince Liz all is not as it seems. This is soon shown to be very true, and even if listeners guess the villain, there’s enough of a twist to make it a rewarding listen.

Helen Goldwyn’s Never Alone sets River and Liz on the track of alien tech hidden in futuristic consumer goods and a link with a university with a tendency to lose the brightest students from the class of a certain lecturer. There are some very good performances here, even if the resolution relies too heavily on River not being human and having a stronger mind than normal. That and one too many tropes leaves this particular story feeling in need of another polish.

In Lise McMullins’ Rivers of Light, We get plenty of the Brig as the Doctor returns (Tim Treloar) wanting to know just who is sleeping in his TARDIS. Let’s just say he is more than a little unsettled by River as a mystery in Yorkshire reveals River’s reasons for being on Earth. There’s a nice sequence where the UNIT dating paradox is touched upon then walked away from, but the overall mystery relies on a confused concoction of Time Lord technology and bad physics. We recognise Doctor Who isn’t really science fiction in any classic sense, happily making up things as it goes along, but we admit to a strong bias against the idea of planetary magnetism being the Macguffin that makes most of this story work.

It’s a classic example of a Curate’s Egg, though others may well not be as bothered by the setup.

The Diary of River Song series 9 is a mixed set of stories, very well produced and (criticisms to one side) an entertaining listen. We’d have preferred it had the revelations of the final instalment been spread across the rest of the boxset a little to make it more coherent, but we still get some new Liz Shaw tales and a partnership we’d be happy to hear again. The casting works really well, and we hope to hear more of them in future productions.

You can grab your own copy from the Big Finish site, in both CD and download format. There’s the usual behind the scenes material and the stories are each one CD long.