Doctor Who: Stranded 2 continues on immediately from the previous boxset, but provides a substantial change in tone

In our review of Stranded 1, we admired the bold experiment of forcing the Doctor (Paul McGann), Liv Chenka (Nicola Walker) and Helen Sinclair (Hattie Morahan) to spend time in 2020 London. We were treated to a set of stories in the Doctor’s Baker Street house, with its own collection of characters with various hidden agendas. We noted it might not be too everyone’s taste, so those who left that set of stories unsure will be pleased to know this boxset has a more familiar energy and pacing. 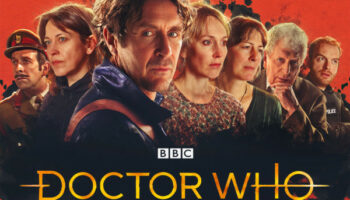 It’s only the end of the world (again!)

Matt Fitton’s Dead Time abuts tidily up against the end of Stranded 1. There’s a range of instant reactions to revelations of aliens and time travel from the household, even though we know they all have secrets and know more than they are revealing. The TARDIS is starting to repair, and while much of its interior is still missing, the Doctor is keen to take a test drive. There’s an anarchic few minutes (a little like a classic ’70s sitcom) that ends up with the Doctor, Liv, Helen, Tania Bell (Liv’s lover, played by Rebecca Root), Torchwood’s Sgt Andy (Tom Price) and teenager Robin (Joel James Davison — son of Peter Davison). It’s a crowd, but by the time the TARDIS lands them an unfathomable time in the future, there’s plenty for them to do as the TARDIS is once again out of power, Earth (the TARDIS can travel in time, but can’t leave Camden) is a desolate, uninhabited wasteland and the world is going to end in under an hour. Welcome back to familiar Doctor Who territory.

The story centres both on the Doctor doing what he does best (improvising), and also allows for some backstory of the various other characters to come out. It all feels very natural, and cautious with some reveals but hints of more to come. There’s also an unexpected mystery concerning one of the newcomers and something called Deus Ex. Without spoiling, we’ll just say it’s a strong tale and there’s more than a little HG Wells in the feel, both in a tribute to an iconic sequence in the 1960 George Pal version of The Time Machine, as well as the setting, which is more than a little like the end-time setting in HG Wells’ novel.

A trip down memory lane

Roy Gill’s Unit Dating cleverly teasers a commentary on the UNIT dating paradox (due to vagaries of ’70s production, not all writers bothered to set UNIT stories a notional ten years from now, so it’s not simple to line up stories against a chronology. While it’s touched upon, the title has a second meaning, and it’s a central theme of the tale.

The Doctor is still trapped in space, so decides to pop back to the last time he was stuck on Earth — yes, enter the Brigadier (Jon Culshaw) and a sneak back to the time of the third Doctor. There’s also a lot of backstory for two more tenants of Baker Street — Tony Clare (Jeremy Clyde / Owen Goddard) and Ron Winters (David Shaw-Parker / Oscar Batterham). The storytelling is clever: in the ‘now’, Helen and Liv are spending time with Tony and Ron while in the past, the Doctor and Andy are meeting young Tony and Ron. It’s a well told tale, though does rely on a gimmick not well-enough exploited in our view. We also get our most revealing look at Helen’s backstory and character, something long overdue.

It’s pretty much open season in the TARDIS in the Lisa McMullin’s story Baker Street Irregulars as the Doctor takes Zakia (Avita Jay) and Aisha (Amina Zia) back to World War II and an unexpected side to their grandmother emerges. There’s also a chance for the Doctor to pop over to France and help save the day while still getting home in time for lunch! Meanwhile Liv and Tania have also taken the opportunity to defuse a bomb, but of course it’s not that simple and we find out there’s definitely something going on. We also get an unexpected family secret and some really sharp dialogue, as well as a little debate on the ethics of time travel, and reflection on the Doctor’s interference in history.

It’s a moving story though might have impacted more had it been two episodes. Helen gets to reveal more of her life as well, so plenty going on in terms of character but it’s also two stories in a row with trans-temporal matchmaking (whatever that means).

Getting there in the end?

John Dorney’s The Long Way Round is a different type of story, told as a sequence of duologues (which may make it easy for recording in many ways). The core Stranded team of the Doctor, Liv, Helen, Tania and Andy have popped into the future, been captured and are being interrogated. Nothing too unusual for Doctor Who, but in this case the tale is a sequence of recorded interrogations with one character at a time facing the central inquisitor who will determine if they live or die. We get a strong sense of a dystopian future Britain, and some interesting debate on the nature of the Doctor, but as a story there’s no action, just talk, and keeping the TARDIS team isolated loses a lot of potential dynamics. Tania, Helen and Liv all come across as far more competent alone than they sometimes get the chance to be together.

The interrogations are punctuated by a 2020 sequence with Tom Baker’s Curator, and while nice to hear we question as to why it was done and what it actually added. There’s bootstrap paradox in the setup of the story, as well as a link back to the first story in the set. The link was very heavily signposted in Dead Time and it failed to deliver any surprise. We also felt the narrative technique would have been more interesting had the interrogations been presented as an evolving time slice across the five characters, not as five interrogations in a row. It’s a technique used well in Lucifer when the police need to question a lot of people to build a picture of a murder, and we felt it would have made this story seem far less constructed.

We’re in more familiar Doctor Who territory and there are now two, apparently separate threads: the Torchwood secret thread and big bad from the first/last stories in this. In the main this is a more traditional release likely to appeal to a wider audience, and as a whole feels more polished to us than its predecessor.

Doctor Who: Stranded 2 comes with the usual collection of behind the scenes interviews, and is available to buy from Big Finish on both download and CD. Full details for this and all other titles on www.bigfinish.com.