Doctor Who: Stranded 1 sees the Eighth Doctor (Paul McGann) facing a challenge like no other. In the wake of the epic Ravenous finale, having defeated The Eleven and multiple Masters, he must endure a truly alien environment: the Time Lord and his friends Liv (Nicola Walker) and Helen (Hattie Morahan) must live on their wits and navigate life in twenty-first century London.

Doctor Who has a famously elastic format, but we are not sure it has ever been stretched this so far before. With a tone markedly different from the regular action and adventure fare, the focus here is on character and relationship drama. At times, it feels more sit-com than sci-fi. The Ninth Doctor may have famously said he didn’t “do domestic”, but his predecessor here has little choice. Of course, the idea has been played with before, such as in The Lodger, but primarily played for laughs and curtailed within a single episode.

Boosting the regular cast, Stranded introduces a diverse set of supporting characters, as well as a pair of old friends. The principal addition to the team is Rebecca Root, playing Tania Bell,  with notable guest stars Tom Price (Torchwood’s Sergeant Andy Davidson) and Tom Baker; the latter, reprising his charismatic role as the “The Curator” from The Day of the Doctor. 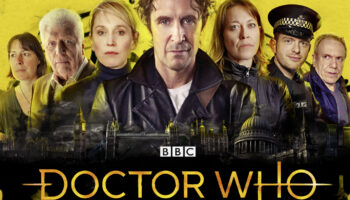 Winding your way down on Baker Street

Sans TARDIS and sonic screwdriver, script editor Matt Fitton’s Lost Property establishes the new normal as the time-travellers make for the Doctor’s house on Baker Street. Far from a quiet bolthole, they instead discover it carved up into flats. And that the Doctor is the landlord!

While Liv and Helen begin to adjust, neither are at home here; the former hails from a planet in the far future and the latter from the 1960s. Both are ill-prepared for twenty-first century life. The Doctor however remains resolute that he can restore his ship, pulling on some old strings to find technology that might help and inadvertently putting them all in danger.

John Dorney’s Wild Animals sees the time travellers integrate still further; Liv takes a convenience store job and Helen gets to grip with their finances. However, when tragedy strikes, it is the Time Lord who struggles to cope the most. He channels his frustration into capturing the miscreant, much to the despair of the local police. This is an engrossing tale, which asks thought-provoking questions about life with the Doctor. It is doubtless the strongest of the set.

The Twenty-First Century is when Everything Changes

Must-See TV, by Lisa McMullan, adds Sergeant Andy to the mix; stuck in the invidious position of being unable to reveal Torchwood’s existence to this Doctor. It also introduces a new resident, the mysterious Mr Bird (Clive Wood), who begins to make himself indispensable by turning his hand to all manner of DIY tasks, ruffling the Doctor’s feathers.

Writer David K Barnes concludes the set with Divine Intervention, with the wonderful notion of the Doctor on a television game show; think Who Wants to be a Millionaire on a budget. Afterwards, as Helen and Liv encourage him to confront the realities of their situation, hints of a wider plot develop with a pair of aliens determined to kill the Doctor.

Long established as a location, the Doctor’s Baker Street house has surely never been so full. With a pair of sisters, an older couple, a busy working father and his attention-deprived son, the woman with a past; we struggled with the sheer number of characters involved. With little major threat, the villain here is very much the situation. There is a slow start to the storyline, presumably with a good deal of groundwork doubtless laid for the future. At least, by the end of the set, it seems clear that format will evolve as the series progresses.

For the main cast, from Liv’s slow-burn romance, to Helen’s management of the house and the Doctor’s frustrations at his inability to repair the TARDIS, there is plenty to explore. Our interest was easily held thanks to the investment we have in these characters, goodwill banked previously if you will. In the wider cast, Rebecca Root sparkles as the down-to-earth Tania and we enjoyed her scenes with Nicola Walker, as well as welcoming the inclusive nature of that storyline.

Weaving Torchwood into the mix is fun, but it also frustrates; characters knowing the Doctor’s future feels like a well-worn angle – see River Song and this very TARDIS team. In this instance, we also have the enigmatic Curator performing that function too. Fun, but at the same time unsatisfying. That said, Tom Baker could pop up to read the phone book and we would be happily entertained.

Stranded is a big, bold idea and it is easy to see why the cast were enthused; these stories offer them the chance to do something quite different with their characters. They deliver some excellent performances, and, on that level, we cannot help but appreciate it. So, is this good Doctor Who? Well it is certainly interesting, but we fear it will not be to everyone’s taste. Might this concept might have been better served in a single boxset, as an interregnum between adventures. Or in a different format altogether?

The story is set to play out over three further 4 x 1hr boxsets, the next of which is due in March 2021.

In the meantime, a later Eighth Doctor is slated to face old enemies in Time War 4 in September, and The War Master: Hearts of Darkness in October – as well as having three Time Lord Victorious adventures too.

Doctor Who: Stranded 1 is available on CD and download from Big Finish.