While the adventures of the Twelfth Doctor, Bill and Nardole continue to blaze across our Saturday nights, there is plenty more happening in the Doctor Who universe. Here are out Big Finish Doctor Who audio story reviews for May 2017

This month, it released stories featuring the First, Fourth, Sixth and Ninth incarnations of the Time Lord, plus a few old friends to boot.

‘Vortex Ice’ and ‘Cortex Fire’ are a pair of two-part adventures, thematically linked. They feature Colin Baker’s Sixth Doctor and his spiky young companion, Philippa ‘Flip’ Jackson. Meanwhile, the Fourth Doctor and Romana are on the trail of a ghost in the wonderfully spooky tale ‘The Haunting of Malkin Place’.

Short Trips brings us a First Doctor tale, ‘Falling’ related by Polly, and Nicholas Briggs is on narration duties for the first box of ‘The Ninth Doctor Chronicles’ where he is joined by some familiar voices from 2005.

In the wider universe of the show, old and new faces come together for the fourth New Series UNIT box set, ‘UNIT: Assembled’, and they tackle both Silurians and Sea Devils. Meanwhile, the final member of the original Torchwood cast finally comes in from the cold as Owen Harper returns for ‘Corpse Day’.

This month’s main range release was the pair of two-part stories ‘Vortex Ice’ and ‘Cortex Fire’. These are sixth Doctor stories, in which Colin Baker’s Doctor is paired with the Big Finish companion Flip (Philippa Jackson, played by Lisa Greenwood). 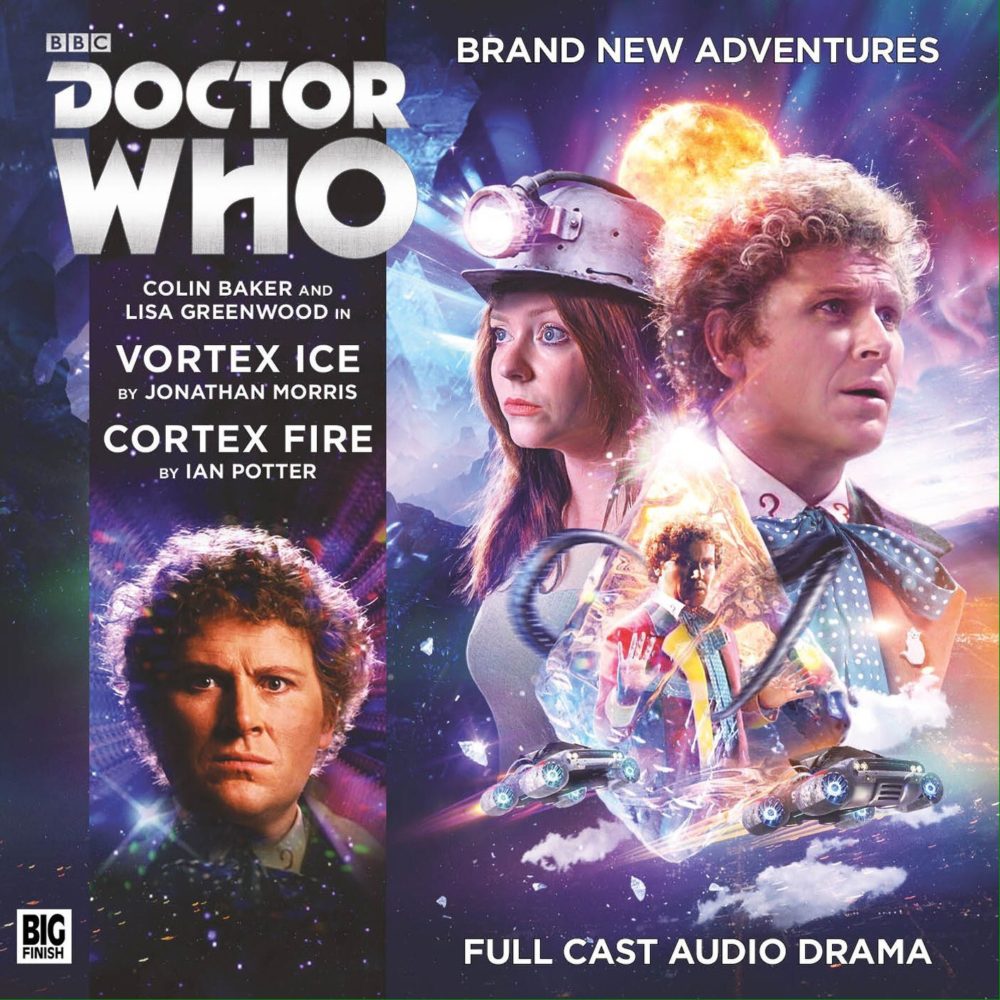 The first story, ‘Vortex Ice’ by Jonathan Morris is a twisty-turny time travel story that starts with the Doctor and Flip materialising 700 feet below ground in a Mexican mine. No sooner have they arrived than they meet a group of exploring scientists – cue some mistrust followed by joining forces to look for alien life. They find a cave of icy crystals, frozen despite the heat, and something trapped, something that will test resolve of both the Doctor and Flip.

In just one disc, Jonathan Morris builds a group of interesting characters and Lisa Greenwood is wonderful as Flip deals with the complexities of time travel in a practical if emotionally challenging way. It’s a great story and paints great pictures of the underground setting as it plays out.

The second story, ‘Cortex Fire’ is by Ian Potter. This time the setting is a futuristic city controlled by the all-powerful computer network known as the Cortex. No sooner have they arrived than they are labelled as outsiders, and potentially dangerous. Meanwhile, people are spontaneously combusting.

Ian Potter’s tale takes a straightforward idea (the all-powerful computer is a villain) and blends in a rather gruesome (and well-acted) twist of people burning alive. There’s a lot more going on than initially meets the eye (or ear!) and Joe Kramer’s soundscape (and music) are full on in a tale of unexpected threats and big performances. It builds well and comes to a satisfactory conclusion.

Listening to the extras is a reminder of how Lisa’s work with Big Finish punctuates her career as an actor: she first appeared as a character in January 2011, before re-appearing as a companion in 2012. As Lisa’s experience has grown, her characterisation has improved subtly, and this pair of stories shows her skills to great effect.

The Fourth Doctor Adventures 6.05 ‘The Haunting of Malkin Place’

In residence at his Baker Street home in the 1920s, the Fourth Doctor is ignoring the noises from the attic on the best advice – his own – and trying to inspire Romana who does not see the point of ghost stories. A steam train ride towards Rye is proposed, in order to meet the famed author Henry James. However, the pair are side-tracked by something far more interesting; a real life haunting in the company of spiritualist Mr Ned Talbot. 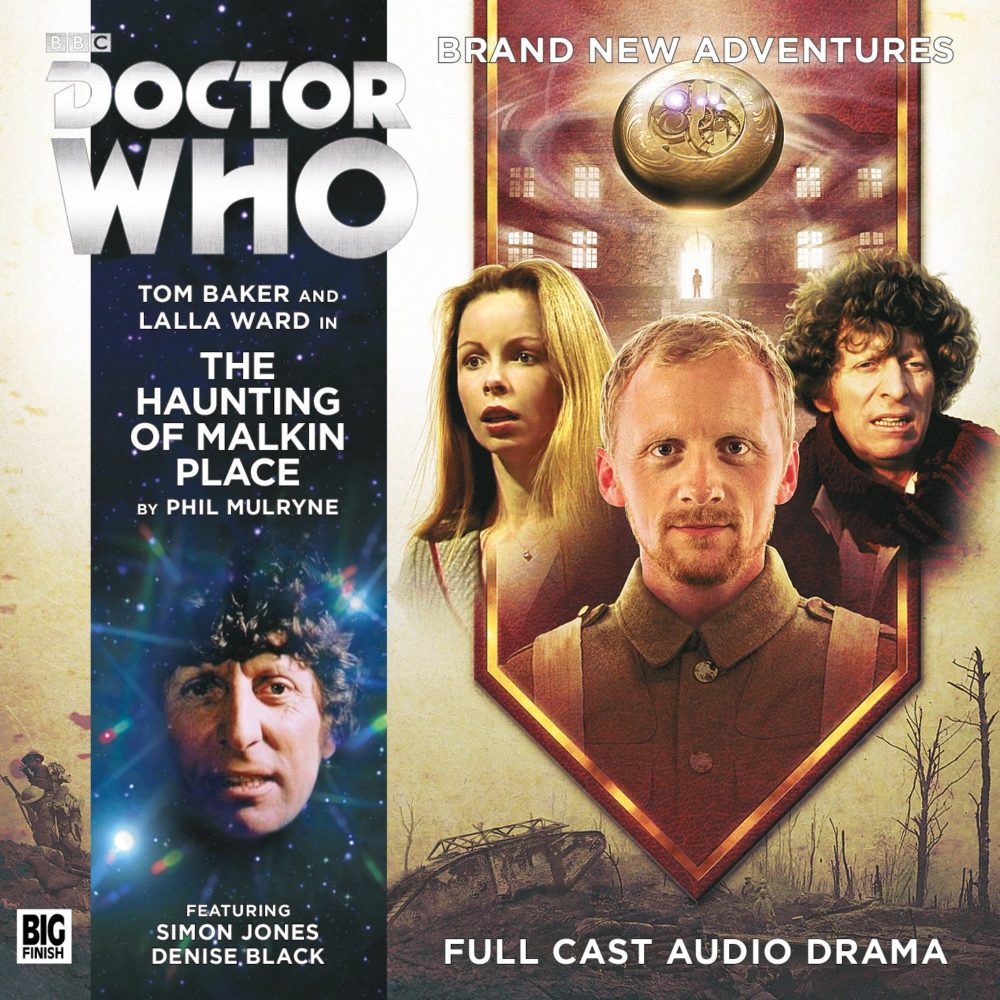 At Malkin Place, a house on foggy Romney Marsh, a soldier presumed dead has returned home to his twin sister, but is tormented by his experience in the trenches. In desperation, Maurice has reached out to Mr Talbot to help settle the restless spirits.

While Maurice and Beatrice’s story has a deep emotional core, and we enjoy the bumps and scares of the haunting, much of the entertainment here is in the battle between spiritualism and scientific method. Phil Mulryne’s story pits the Doctor and the super-sceptic Romana against Talbot, and enjoys watching the sparks fly.

With the casting of Simon Jones (The Hitchhiker’s Guide to the Galaxy’s Arthur Dent), Talbot is a likeable adversary for the Doctor, and we thoroughly enjoyed the séance scenes with Lalla Ward playing Romana at her most exasperated.

In the guest cast, Gunnar Cauthery impresses as the troubled Maurice and Fiona Sheehan (one of Big Finish’s own Survivors stars) brings plenty of emotion to the role of his sister Beatrice, who is petrified about losing him again.

Of course, as with all the best ghost stories, there is a pleasurable twist in the tale – and given that it is Doctor Who, there’s a well-laid temporal conceit too. Great fun – though we would have liked more of it!

Jonathan Barnes’s Short Trips story, ‘Falling’, is a first Doctor, Ben and Polly story, narrated by Anneke Wills who played Polly on the show. Now firmly established as Mrs Polly Jackson, the days of travelling in the TARDIS with her now-husband Ben are long behind her, yet on this particular day she finds herself reminded of events from long ago, events that at the time made little sense. 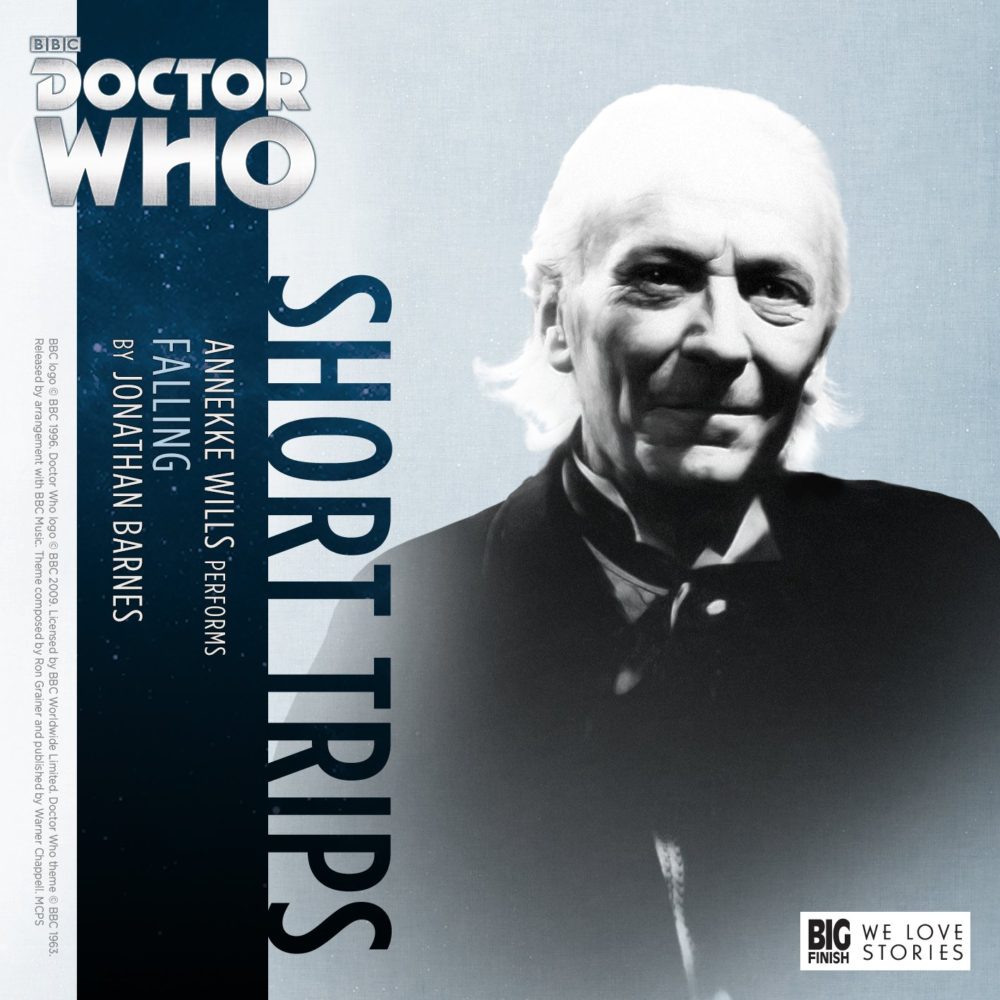 What seems at first to be a framing device to give Polly a chance to reminisce, takes the listener on a journey to an encounter on the edge of the magical and the religious. Jonathan Barnes’s prose quickly conjures up the location, and Anneke Wills’ reading covers all the bases, narrator, Polly, Ben and even the Doctor. Her Ben voice works well, with enough accent to recapture Ben without caricaturing.

There’s a nice twist at the heart (or should that be hearts?!) of Falling, and an unexpected link back to key moments in the show’s history, without doing too much in the way of foreshadowing. It all dovetails back into what seemed to be a convenient framing device to give an uplifting, and rather magical ending. A great way to spend half an hour!

With Christopher Eccleston not of a mind to reprise his role as the Ninth Doctor at present, it is understandable that Big Finish need to find other ways to bring stories from his series to life. The approach adopted here is similar to the one they first took with the early Doctors – using a single narrator (in this case Nicholas Briggs) and an additional “guest voice”. 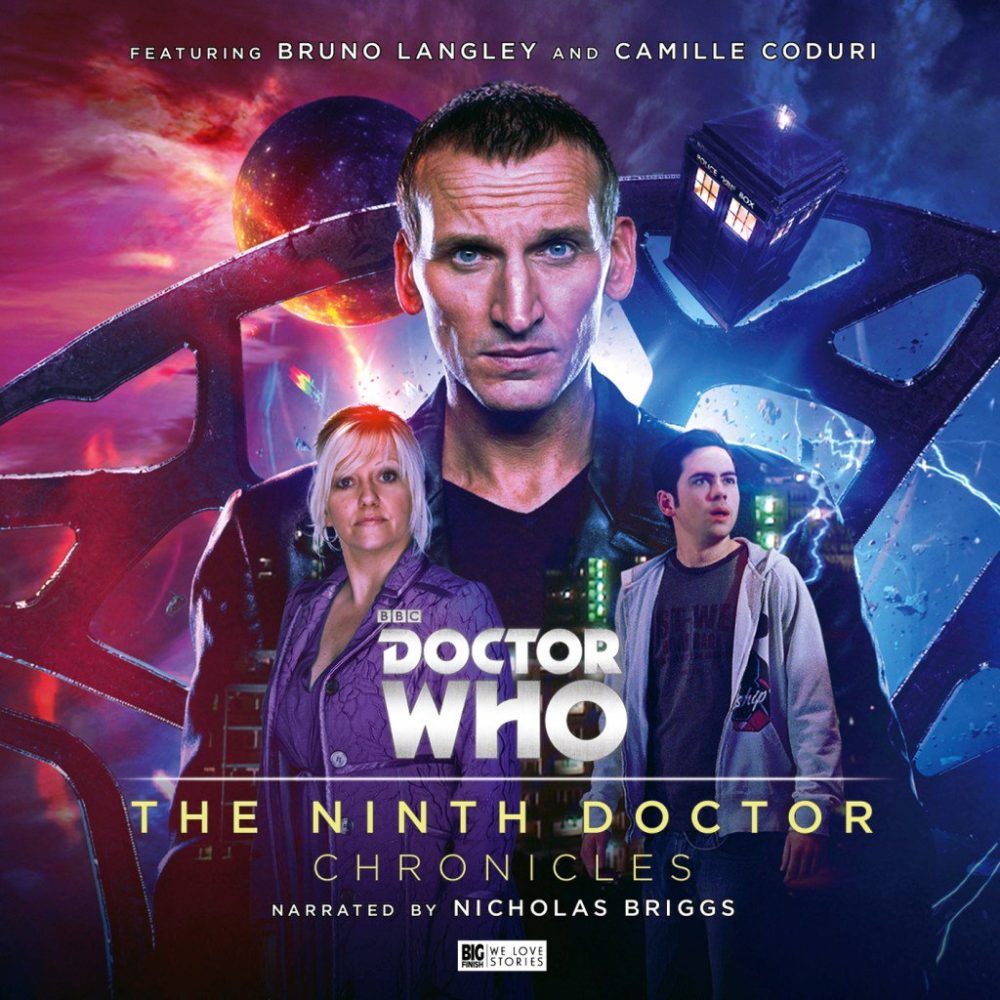 Across four stories, and with some impressive casting, this set offers an enjoyable slice of 2005. Cavan Scott, who has written extensively for Nine in comic form, opens the set with ‘The Bleeding Heart’ which brings a pre-Rose tale. Travelling alone, and bedevilling cosmic news reporter Adrianna Jarsdale (Claire Wyatt), he finds himself outside an intergalactic conference on the peace planet of Galen… and dealing with a consequence of the Time War.

A celebrity historical follows in Una McCornack’s ‘The Window on the Moor’ as, now accompanied by Rose, he becomes embroiled in the fate of a feudal city from another dimension which has a direct connection to Emily Bronte. Laura Riseborough is the guest artist here, impressing in dual roles.

Squeezed into the gap between ‘Dalek’ and ‘The Long Game’, Bruno Langley’s failed companion Adam Mitchell gets another airing in ‘The Other Side’. Visiting 2020 and a disused cinema, writer Scott Handcock grants Adam some long overdue redemption as manages to help save the day in a story with some clever temporal dynamics.

Finally, and saving the best for last, James Goss brings us back home to Jackie Tyler for ‘Retail Therapy’. Finally a financial success, Jackie has become a rep for a home-selling organisation with only one product – the strangely calming Glubby Glub. With some charming gags (especially one about the internet on people’s phones) and a tremendous performance from Camille Coduri, this tale easily had us sold.

And so to the format – narrated tales will not be some people’s cup of tea, but Nicholas Briggs does a fine job in giving us a flavour of the Ninth Doctor’s character, as he did in 2013’s ‘Night of the Whisper’, as well as narrating and voicing a pantheon of characters. His Nine is not a perfect match and does not try to be an impersonation – it is perhaps closer in the comic rather than the dramatic moments – but we found it easy enough to relax into as there is so much else going on around.

With strong stories and the usual impressive standard of sound design, this box brilliantly evokes those heady days of Doctor Who’s 2005 revival (about which we are still pinching ourselves!)

Ever since Torchwood was brought back to life on audio, one essential character from its first two years has been missing. That omission is remedied here as Burn Gorman reprises his role as Cardiff’s most acerbic medic, the late Dr Owen Harper. 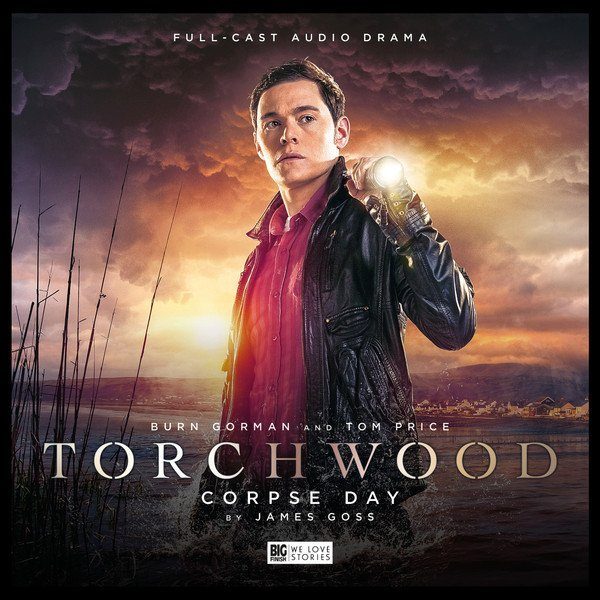 Set within Series Two of the television show, with Owen a walking corpse thanks to his over-hasty resurrection after being shot, James Goss’ story takes some pleasure in showing his predicament. Paring the medic with the hapless PC Andy (Tom Price) to look into a cold case – an annual favour that Torchwood does for the local police – there is much mirth mined from Owen’s visceral pleasure as he watches Andy eat.

The trail of this particular cold case leads to some genuinely dark territory, perhaps as dark as this audio has gone and certainly owning the series’ adult status. And yet, among the horrific, there also nestles a challenging discussion on the value of life and Owen gets to put his medical training to use. And deal with a Weevil.

Dark, disturbing and deeply funny – as Owen and Andy are a brilliant odd couple – this is a story that stays with you and could not be further away from last month’s 70’s hi-jinks, which only serves to demonstrate Torchwood’s incredible range.

Let’s hope Burn Gorman will be back again soon – and surely there’s a fantastic two-hander just waiting to be written for him and Naoko Mori’s lovelorn Toshiko Sato?