The action takes place in a make believe America of the future where water is in extremely short supply. In response to the drought, the people in power (money-grabbing corporation Urine Good Company) have demanded that all townspeople pay to use the one public toilet in town.

The penalty for peeing anywhere else? Offenders are transported to the mythical “Urinetown” and punished accordingly. When two young lovers decide that people have a basic right to pee where they wish and initiate an uprising, things start to get out of hand.

In charge of narrating this unusual story is corrupt town policeman Officer Lockstock, who is constantly breaking the fourth wall to poke fun at the tropes (one song is called “Too Much Exposition”) and flagging up all the various ways in which Urinetown is not a traditional musical.

Of course, it is a traditional musical. In lots of ways Urinetown ticks all the Broadway boxes: it is funny, well-plotted, hugely exaggerated, full of brilliantly complex, weaving musical numbers, and propped up by a cast so full of energy and talent that it exhausts you just watching them perform.

If there is one way in which this show really diverges from the conventions it is that, when you get down to it, the story lacks any genuine tenderness.

This is a show that centres around deliberate send-ups of almost every musical theatre trope imaginable, but while it’s not uncommon to see people poke fun at and subvert the most popular showy tropes (see: The Book of Mormon, Buffy’s musical episode), it’s rare to watch a piece of musical theatre so relentlessly committed to refusing its audience a happy ending, or – hell – even something close to emotional catharsis. 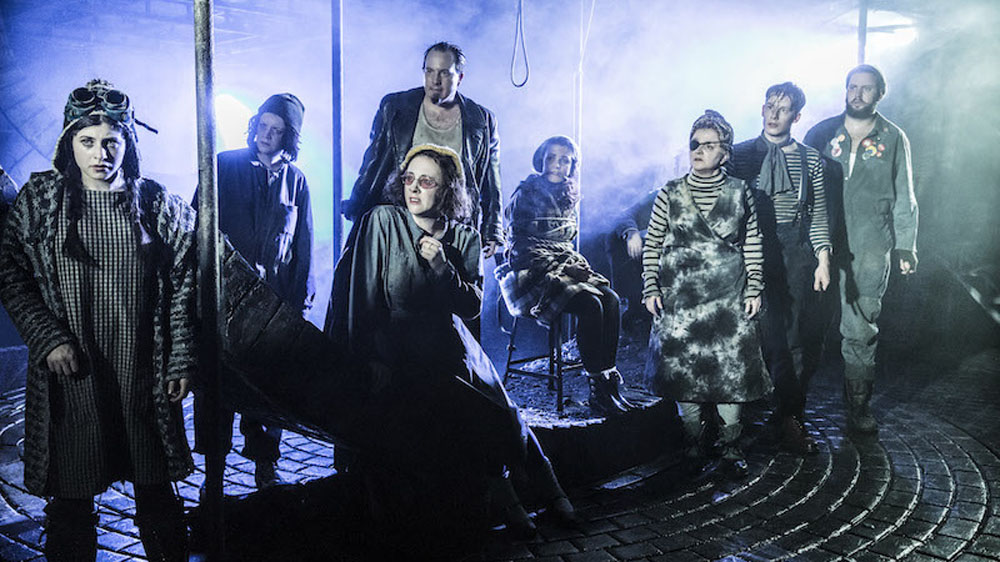 The best Urinetown offers are a couple of stolen moments between its romantic leads Bobby and Hope, and a very brief moment of tragic intensity from one of the supporting actresses when she learns of her son’s death. Despite the rousingly good score and unsettling allusions to the story’s central message – that our current way of life is frighteningly unsustainable – there are moments during Urinetown that ring just a little bit hollow.

Otherwise, this is a show that does an outstanding job of entertaining its audience – and this is largely to do with the quality of the performances involved.

In a cast without a single weak link there are a couple of people you’re likely to go home remembering. Matthew Seadon-Young does an excellent job of bringing wit and warmth to small-town hunk Bobby Strong, a Tim-nice-but-Dim who only takes off his glasses to look broodingly into the middle distance.

Whatever Urinetown lacks by way of heart, it makes up for in visceral, brutally entertaining exuberance. And while its central message might not drastically change your outlook, you might just think twice about letting the tap run the next time you brush your teeth.

Performed on Friday 10 October 2014 at the Apollo Theatre in London.