Guardians of the Galaxy is a strange entry into the Marvel canon.

Based on a lesser known comic franchise, and featuring such an outlandish group of characters as a genetically engineered, gun totting raccoon and a sentient tree, it’s something of a wonder that it got made at all, let alone into a big-budget, tent-pole blockbuster. The fact that it did – and that it’s so enjoyable – is testament to Marvel Studios commitment to entertain.

The film stars Chris Pratt as Peter Quill (although he prefers ‘Star-Lord’) a “Terran” who was abducted from Earth as a child on the night of his mother’s death, and was raised among the rogues and bandits of Michael Rooker’s Ravagers. Interestingly, the film doesn’t concern itself with Quill’s quest to return home – indeed, it’s a notion he scarcely seems interested in.

Instead, this is a sci-fi film that’s quite happy to bound around the galaxy and not concern itself with Earth, nor any of that planet’s new heroes. It’s actually refreshing to see (despite the looming presence of Avengers’ big bad Thanos) a very standalone Marvel film.

And being that it’s not beholden to audience expectations in the way the better known super-hero franchises are, there’s less pressure than there might be. For this one, Marvel can simply cut loose and have fun with it. And that’s exactly what they do!

Directed by James Gunn, who has always had a tendency for the more comedic slant on any given genre, his offbeat sensibilities are a great fit for this oddball property, and Guardians of the Galaxy is an absolute hoot throughout. It’s both fun and funny, with Pratt’s intensely likable lead teaming up with Zoe Saldana’s fearsome warrior Gamora; wrestler Dave Baustista’s Drax the Destroyer; the Vin Diesel mo-capped Groot (the tree); and the Bradley Cooper voiced Rocket Racoon in order to stop Kree villain Ronan (Lee Pace) destroying the universe.

The principal group are all established quickly and well, and each has their moments to entertain. In particular, Bautista displays a fine comic touch, approaching his overly literal powerhouse with a deftness that belies his relative inexperience in film.

What’s most striking about the script (by Gunn and Nicole Pearlman) is the way it manages to balance the silliness and wisecracks with strong, effective character moments. The misfits are all fully fleshed out, and Gunn will have you caring about each one. The themes of family and friendship are as old as the hills, but when told effectively, as they are here, they still resonate. Gunn has managed to find the humanity among even these most inhuman of characters, and that’s impressive.

The plot, while entertaining, offers nothing new, with the main focus being on yet another MacGuffin that could destroy the universe and must be contained. Marvel’s reliance on MacGuffins is wearing thin, and the plot here, while relatively simple at heart, is just too busy. 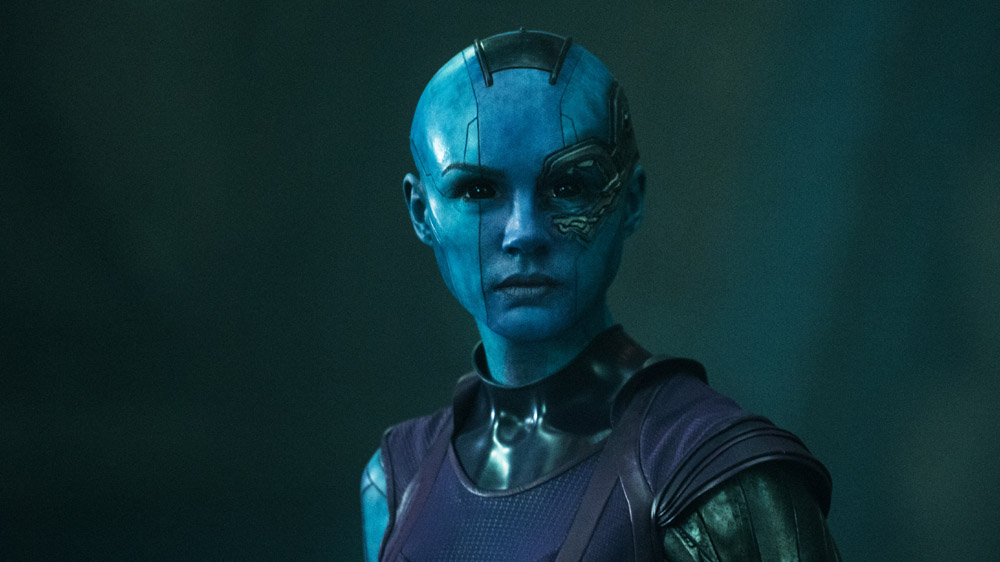 There are too many figures in the film’s rogues-gallery – too many factions involved – and as such none really stand out. Gunn favourite Michael Rooker probably fares best as the bandit Yondu, and Karen Gillan’s striking transformation into Nebula is a triumph of enigmatic character design, but Lee Pace’s villain of the piece fails to make much of an impact.

Gunn directs with real flair throughout, creating a visually stunning, eye-meltingly gorgeous galaxy. The arresting visuals are never more apparent than in the climactic battle, which might just be the best space-battle since Firefly took flight almost ten years ago in ‘Serenity’.

Gunn also utilises the sort of soundtrack one wouldn’t normally experience in a film like this. Quill’s one souvenir from Earth is an old Walkman, complete with his “Awesome Mix” tape from when he was a boy. As he listens to it, so do we. It’s a clever device, and the juxtaposition of bright, effervescent hits from the 70s and 80s sound-tracking a futuristic science fiction romp is one of the film’s true joys.

Guardians of the Galaxy, much like the titular team it focuses on, is a mixture of people and elements that, on paper, just should not work. But, that, perhaps, is why it does. Marvel couldn’t really lose with Guardians: either it’s a failed standalone experiment that still makes tons of money and they can quietly brush it under the carpet, or it’s a successful testament to Marvel’s reluctance to play things safe; a triumph of unlikely ideas, disparate creatives and bold decision making.

It’s certainly a case of the latter, providing more laughs and heart than perhaps any previous Marvel film to date. If the Guardians are the most unlikely band of heroes going, then they’re also the ones that we want to see more of the soonest.

In essence, Guardians of the Galaxy is everything that a summer blockbuster should be.