Latest Big Finish Torchwood audio release Madam, I’m is a complex story of mind manipulation, timeline trickery and serial substitution delivered through the interactions of a well-matched trio of characters. Set in the early post-War Torchwood era, the pairing of the scheming Norton Folgate and the wily Lizbeth Hayhoe has already proven an effective combination, and the interaction of the two is integral to the drama of Madam, I’m.

The story also sees the return to the Torchwood fray of Adam, an alien who survives by twisting the minds and memories of other beings to his advantage. The character first appeared in the TV episode of the same name, the fifth story of the second series. And although this is not an ‘origins story’, the events of this audio predate that on-screen manifestation which messed with the minds of Jack Harkness and his associates.

Torchwood operatives Lizbeth and Norton base their professional relationship on a sparring dynamic, rich in innuendo, which sees each of them sniping at and dismissing the other. But underneath that prickly surface are signs of a more respectful connection in which each acknowledges (however grudgingly) the talents and professional capabilities of the other. Both individuals are intrigued at the arrival of Adam, a young man who ingratiates himself in their lives in a variety of unexpected ways. In fact, Adam appears in a number of different guises and takes on a number of ever more senior roles. And Norton and Lizbeth find it difficult to keep their sense of Adam’s place in their world in focus as their recollections of previous encounters with Adam get misplaced or overwritten.

But whether Adam is pursuing a clandestine relationship with a self-conscious Norton, or acting as the dutiful nephew to his emotional aunt Lizbeth, there is a common theme to his approach. And that’s coming up with ways to make both of them doubt their resolve, their strength and their self-belief. Lizbeth is convinced she is washed-up, and a prisoner of sentimentality and regret. Norton is stripped of his audacious confidence, as he becomes keen to hide his real nature, fearful of the social repercussions of the discovery of his sexual orientation.

James Goss’ cleverly constructed script pulls apart the story’s narrative, relating events out of sequence and replaying encounters over again to allow Adam to take greater advantage of his situation each time around. It’s a very effective storytelling technique, and it comes into its own as Lizbeth and Norton develop niggling doubts that things at Torchwood may be coming apart. The pair start to think of ways to alert their future selves to the fact that their thoughts are being manipulated for someone or something else’s benefit. All of this is happening in the context of an impending war that sees Torchwood prepare to repel an alien invasion of Earth.

There’s wit and dexterity in Goss’ storytelling, and while it’s clear that Norton and Lizbeth will eventually stumble across the truth of their predicament, it’s not immediately clear how they will be able to thwart Adam’s scheme. It’s arguable that the process takes ten or fifteen minutes longer to arrive than it needs too, but the fully-engaged performances of all three members of the cast keeps things entertaining. Lizbeth’s fate, in the conclusion of Parasite, is already sealed, but Dervla Kirwan clearly relishes the opportunity to revisit the role, as the passionate but resentful occupant of Torchwood’s Room 13, earlier in her own timeline.

As the cast interviews note, it’s been five years since Samuel Barnett first took on the role of the duplicitous (but not wholly dislikeable) Norton Folgate. Barnett is always good value in the role, but there are new aspects to Norton’s nature to explore in Madam, I’m. Adam’s mental suberfuge undermines his character’s self-consciousness, pushing him back into the closet and introducing nervousness and self-doubt where there was brashness before. As Adam, Bryan Dick does well in what is a challenging role. Adam is not an emotionally astute manipulator of others – he’s too pragmatic and focused on the task in hand for that. But Dick avoids the risks of blandness, finding ways to bring texture and substance to what would otherwise be something of a vanilla villain.

Music and sound design add some depth and additional atmosphere and sense of time and place to proceedings as things are brought to a satisfying conclusion, complete with the last-minute revelation of some previously hidden culpability. 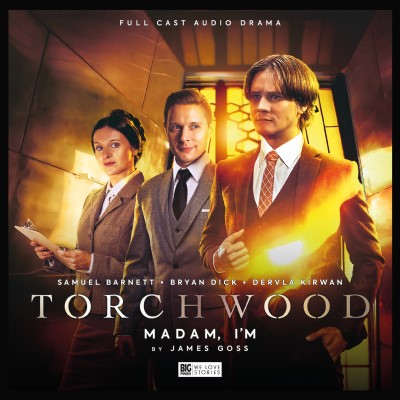